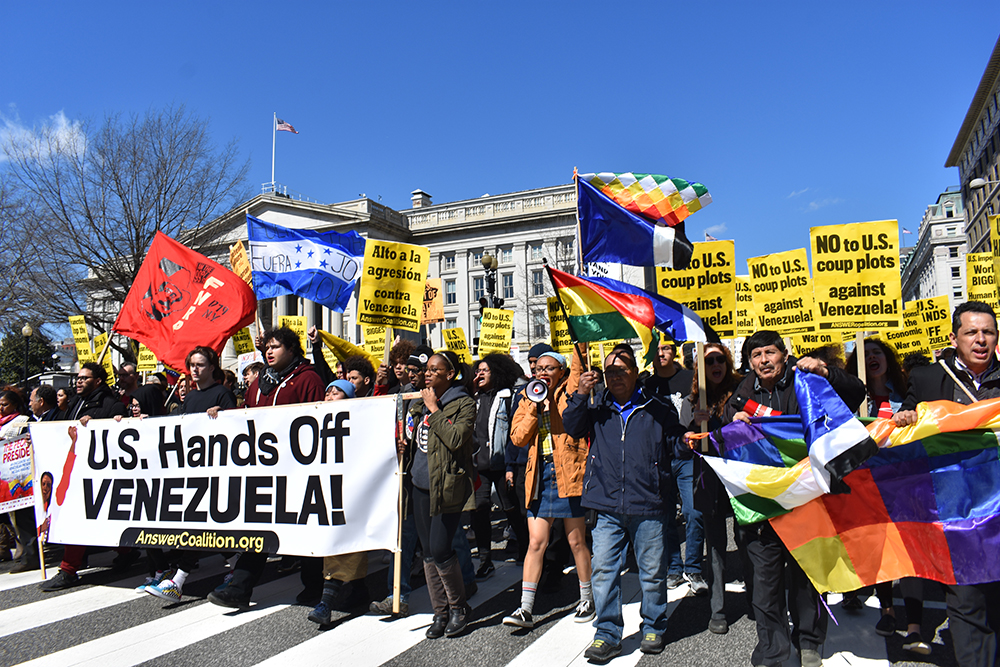 The ANSWER Coalition condemns the latest acts of aggression against the government of President Nicolás Maduro and people of Venezuela, attempted by paramilitaries on May 3 near the coastal town of Macuto, and another thwarted infiltration today of eight terrorists, May 4, 40 miles west of Macuto, in Chuao near the sea. The Venezuelan authorities as of the evening of Monday, May 4, indicate that more plots may be unfolding, calling for maximum alert.

The hand of the Trump administration in these attacks — together with the Colombian government of Iván Duque — is evident for the world to see, especially in light of the economic sanctions, and the massive funding and arming of paramilitary and opposition groups since early 2019.

We further denounce the chain of events unleashed by Washington, including a $15 million “reward” on March 26 by U.S. Attorney General William Barr against President Maduro, National Constituent Assembly president Diosdado Cabello and others on false and unsubstantiated charges of “narco-terrorism.”

This outrageous charge and bounty is psychological warfare meant to justify U.S. direct military action, as evidenced by the doubling of the U.S. military in the Caribbean under the guise of stopping alleged drug trafficking by Venezuela.

On March 23, a large cache of weapons was captured in Colombia that former Venezuelan general and coup plotter Cliver Alcalá boasts was in coordination with U.S.-backed Juan Guaidó. Strangely, Alcalá is under arrest now in the U.S., accused of drug trafficking but widely believed to be collaborating now with Washington.

By their nature as small-scale operations organized by mercenaries, the infiltrations were easily defeated by the Bolivarian forces. The real danger, however, lies in U.S. imperialism’s openly stated intent to overthrow Maduro, using every weapon in its arsenal, military, economic and media demonization of the government.

The Trump government’s deliberate neglect in the United States has led to almost 70,000 pandemic deaths, at the same time that it is waging a genocidal policy against the Venezuelan people, threatening the peace and stability of the country. Together with organizations worldwide, we stand in solidarity with the Venezuelan people and its legitimate government of President Maduro.