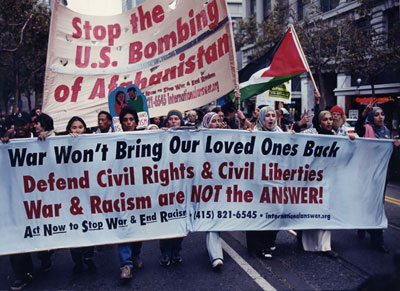 We are very excited about an opportunity that will allow us to greatly expand our organizing and activist base, and strengthen the position of ANSWER as a vital progressive organization in the years to come.

Since the ANSWER Coalition was formed, our Bay Area office has been located at 2489 Mission Street in San Francisco. The office has served us well, but we have outgrown it and it is limiting our potential for growth.

Now we have taken a long-term lease on a much larger space, at a comparable rent. It is an entire accessible, storefront building near the 24th St. BART station, just blocks away from our present location.

Our immediate challenge is to raise $50,000 in the next month for necessary construction, carpeting, electrical, plumbing and other materials to transform the building into the great asset for the progressive movement that it can be.

We have so far raised 40% of what is needed. We are making an urgent appeal to you to help us meet this goal. Your year-end donation can be tax-deductible if made to the Progress Unity Fund.

All the labor for this project is being donated by ANSWER activists and friends. If you are interested in volunteering, particularly if you have construction or painting skills, please call our office at 415-821-6545.

Most of you reading this have generously supported the activities of the ANSWER Coalition. With a volunteer staff and a shoestring budget, we have rarely had to appeal for funding a specific organizational purpose.

As the ANSWER Coalition approaches its tenth year, it is worth reviewing the accomplishments over the years to illustrate the importance of your contribution to our building fund.

• Founded in the days immediately following the events of Sept. 11, 2001, the ANSWER Coalition organized protests on both coasts to counter the growing U.S. drive towards war, the xenophobic targeting of Arab and South Asian people, and the attacks on civil rights and liberties.

• As the Bush/Cheney administration stepped up the march to war against Iraq, the ANSWER Coalition emerged as a major force in the U.S., able to mobilize in this country and to become part of the global movement opposing this war based on lies and deception. Across the country, millions joined in protests initiated or actively supported by ANSWER.

• A hallmark of ANSWER’s organizing has been a principled position opposing racism and supporting self-determination for those fighting occupation and colonialism in Iraq, Afghanistan, Haiti and elsewhere.

• The ANSWER Coalition has opposed all attempts by the Pentagon to expand their wars and threats against the people of many nations, including Iran, Cuba, Pakistan, Venezuela, Lebanon, Syria, Korea and more.

• A key factor in the building of a new anti-war movement has been the participation by active duty service members, their families and veterans. ANSWER has helped to bolster this, including an affiliation with March Forward!

• Some of the most significant efforts by the San Francisco Bay Area chapter over the last year have been building solidarity between the anti-war and labor movements. In one of many similar actions, on the 7th anniversary of the U.S. invasion of Iraq, anti-war activists were joined by many in the labor, student and other movements in Civic Center. We marched to the Hilton hotel to show solidarity with the Local 2 workers in their struggle for a fair contract.

• After the deadly Israeli attack on the Gaza Freedom Flotilla in May, ANSWER joined an effort with labor and Palestinian organizers to spearhead a 24-hour boycott of the Israeli Zim Lines ship at the port of Oakland in June. It resulted in about 1000 people turning out in protest and successfully preventing the unloading of the ship by International Longshore and Warehouse Union workers, who refused to cross the picket line. It was the first time this ever happened in a U.S. port.

• ANSWER has played a key role in many of the developments and actions demanding justice for Oscar Grant and an end to racist police brutality.

• The ANSWER Coalition has significantly expanded in recent years. New ANSWER chapters have been organized across the country, from New England to New Mexico, South Dakota to South Florida, and more.

• Just last week, ANSWER sponsored protests across the country calling for “No New Korean War.” These protests received wide media coverage, including CNN and many other national and local media outlets.

• The monthly ANSWER film series now in its 8th year, and we have sponsored numerous teach-ins and public meetings.

Please consider what you can donate to making this opportunity a reality. Tax-deductible donations can be made to Progress Unity Fund by check, credit card or online at www.progressunity.org.

Peace will never be possible without justice. ANSWER is engaged in opposing racism, discrimination, bigotry and exploitation. We fight for the rights of labor, immigrants, for a healthful and sustainable environment, and the realization of all the necessities of life, including the right to a job, housing, education, health care and nutritious food.

The majority of humanity shares these aims. But the aspirations of the people here and around the world are in direct conflict with corporate globalization and the military-industrial complex, for whom profit and domination are all that matters.

As the history of the last century has clearly demonstrated, real progressive change can only be achieved by a powerful and organized people’s movement. Building such a movement is the goal of the ANSWER Coalition.

Please consider how you can help make our new location a success for the struggle.

P.S. Your donation to Progress Unity Fund/ANSWER is tax-deductible. Let’s keep as many anti-war dollars as possible out of the hands of the Pentagon.