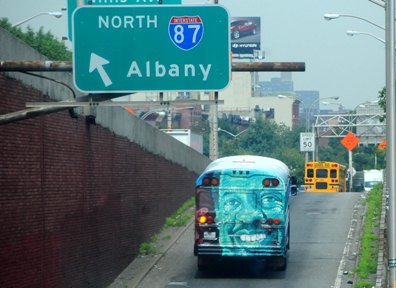 A Pastors for Peace Caravan featuring a mural of Lucius Walker

Nearly 30 people attended a July 7 Pastors for Peace event at May Memorial Unitarian-Universalist Society in Syracuse, NY. The event was a stop along one of the bus routes of the Pastors for Peace caravan that is challenging the illegal and immoral blockade of Cuba.

After a brief introduction by organizer Doug Igelsrud, caravnista and ANSWER Coalition organizer Bill Hackwell was brought to the stage. Hackwell is a widely exhibited and published social justice photographer from the San Fransisco Bay area. He was part of the first Pastors for Peace caravan to Cuba in 1992 and has been active in the struggle for decades.

Hackwell began by saluting the late Reverend Lucius Walker, the director and visionary of Pastors for Peace who passed away in Sept. 2010. Hackwell presented a slideshow of Walker's work for Cuba over the last several decades that included pictures of Walker confronting border patrol agents, delivering aid and speaking at press conferences and demonstrations.

The focus then shifted to the blockade of Cuba and the importance of the struggle to fight it. "The last 11 presidents," Hackwell said, "have maintained the exact same policy towards Cuba: regime change." That policy, the 52-year-old blockade of Cuba, has had disasterous effects for the Cuban people. Any company that does business in the U.S. is sanctioned for trading with Cuba, which means that Cuba has a difficult time buying and selling commodities on the world market. Hackwell noted that the policy also harms people in the U.S., as Cuba is a leader in the development of biotechnology and has successfully developed vaccines for several deadly diseases. As a result of the blockade, however, people in the U.S. do not have access to those vaccines.

The creation of the Bolivarian Alliance of the Peoples of our America's (ALBA), an alternative to the imperialist International Monetary Fund and World Bank, has been a positive development for the Cuban people, as it enables mutually beneficial trade to take place between Latin American countries. Also helping to combat the U.S. blockade is the fact that China trades openly with Cuba.

Hackwell said that, while the Pastors for Peace project is intended to deliver humanitarian aid, the more important aspect is to directly challenge and resist the illegal blockade.

Before closing, Hackwell also addressed the case of the Cuban Five, five men who were prosecuted for defending Cuba from U.S.-backed terrorist organizations.To read more about the Cuban Five, click here.