ANSWER participates in Minjok event for justice and peace in Korea 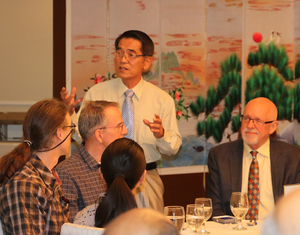 The following speech was delivered by ANSWER organizer Preston Wood at an event hosted in Los Angeles to mark the seventh anniversary of the Declaration on the Advancement of South-North Korean Relations, Peace and Prosperity. This was originally published by Minjok, which hosted the event.

The ANSWER Coalition joins with all of you here and with the Korean people in the South, the North and overseas, who are united in affirming once again the historic June 15th North–South Joint Declaration in the year 2000 that offered both the possibility and the promise of overcoming the tragic division of the Korean peninsula and finding a path for peaceful reunification. Also, we are here to commemorate the Seventh Anniversary of the Declaration on the Advancement of South-North Korean Relations, Peace and Prosperity of October 4, 2007.

First of all, we are happy to hear the news that the high level talks between the DPRK and South Korea are set to resume. This shows that the spirit of the June 15th accord is still alive, and it calls on all of us to intensify the struggle for reunification, justice and peace.

If we think back to the June 15 summit, if we remember how that agreement was greeted by all the Korean people, it would not be an overstatement to say that it resulted in a sense of optimism and hopefulness, and even Euphoria. It represents at its core the heartfelt desires of the Korean people to overcome the terrible division and to bring the millions of families together again and to reunify Korea so that Korea can be a strong powerful country and emblematic of justice and peace, rather than division and war.

It’s important to think about the fact that 14 years after the June 15 summit, and in spite of the fact that it did represent the heartfelt aspirations of the Korean people, that the situation in Korean today remains frozen, that division persists, that acrimony has intensified rather than diminished, and that the threat of war remains as great as at any time.

I want to explain how we in the ANSWER Coalition view this contradictory phenomenon.

The problem of division on the Korean peninsula does not, in its roots, emanate from Korea itself, but rather it is the consequence of the policies of the government in Washington, DC – many thousands of miles away from Korea. The problem is in Washington, not Korea.

Throughout history, we have seen hundreds, perhaps thousands of wars and conflicts. Wars begin and eventually they come to an end. It is perhaps only in Korea that the war that began on June 25, 1950, more than half a century ago, has continued until this day. The armistice agreement signed on July 27, 1953, has never been replaced by a peace treaty. The United States government refuses to sign a peace treaty, and so the war continues, at least in the technical sense, and in a real sense, because the U.S. continues to threaten North Korea, engages in war exercises that simulate the destruction of N. Korea, and imposes draconian economic sanctions that are designed to destabilize and weaken North Korea.

The June 15 summit agreement took place in the context of an apparent change in U.S. strategy toward North Korea. It was the Clinton administration that seemed to be opening the door to a normalization of relations with the DPRK. It was the Clinton administration that sent Madeline Albright, then Secretary of state, to hold high level meetings in the DRPK. Because the US government, the government in Washington, was changing its policy of belligerence toward Korea, there was an immediate opening for the resumption of relations between North and South Korea.

When George W. Bush took office on Jan 20, 2001, there was an immediate and abrupt about face. It was clear that the then new US government wanted to shut down the process of normalization, and in March 2001, when President Kim DaeJun visited Washington, he was treated rudely and his policies were publically repudiated at the White House. And then, George W. Bush declared that North Korea was part of an "axis of evil", along with Iraq and Iran, and then he invaded Iraq, and then, as we all know, North Korea resumed its nuclear weapons program, because it understood that only a strong military would stop, or halt, Bush's planned aggression. And that is what froze the situation in the Korean Peninsula. It was the policy of the U.S government that stopped the process. We can see this clearly from the historical record.

And so, as we gather here tonight, remembering and honoring the June 15 Summit, as well as the Declaration of the Advancement of South-North Korean Relations, Peace and Prosperity, of October 4, 2007, we are recognizing the desire of the Korean people for peaceful reunification. All of us here must embrace our responsibility to say loudly and clearly to the US government, that the Korean War must finally come to an end, and that the threats and sanctions must stop, and the attempt to isolate the DPRK must end. If the economic sanctions are lifted, if a peace treaty is signed, then, at that time, all of the basic conditions for a peaceful reunification will have been established.

Recognizing this reality, we in the ANSWER Coalition, as one sector in the U.S. population, have been, and remain today dedicated to change U.S. policy. The problem, as I said earlier, is not in Pyongyang, nor is it in Seoul, but right here in the United States, in Washington DC.

From all of us at the ANSWER Coalition, thank you very much for extending this invitation to us, and let’s move forward together to begin a nationwide campaign to educate and mobilize the people of the US to end the war against Korea once and for all.

Solidarity with the Korean people!