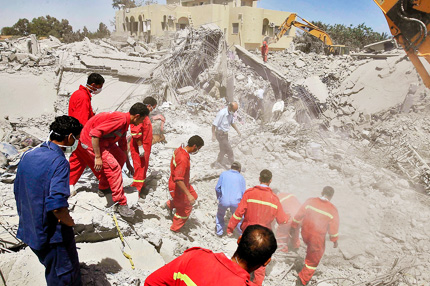 This is a response to the opinion article "No Libyans allowed at ANSWER Libya forum," posted on the Daily Kos and to various email lists on June 23, 2011. The writer of the response is the co-coordinator of the ANSWER Coalition in Los Angeles.

There is much to dispute in the article "No Libyans allowed at ANSWER Libya forum," posted on the Daily Kos and elsewhere. I strongly disagree with its tone and assertions. The article's sympathies appear to lie with those who openly support the U.S./NATO war on Libya. But, political line aside, the article is full of patent distortions, mischaracterizations and shoddy analysis from start to finish.

Its headline and main assertion that there were "No Libyans allowed at ANSWER Libya forum" featuring Cynthia McKinney is a flat-out lie. I suppose the headline was meant as a false, but catchy "attention grabber" since the writer even admits that several pro-war Libyans participated in the Q and A inside the anti-war event.

First for some context on the event: The Eyewitness Libya Forum sponsored by ANSWER and featuring Cynthia McKinney Los Angeles was a very successful event. It took place on Saturday, June 18 at Immanuel Presbyterian Church and was the first stop of the national speaking tour featuring Cynthia McKinney, who had just returned from a fact-finding mission to Libya. Over 200 people attended the Los Angeles forum; 60 to 70 percent of the attendees were African Americans. And 95 percent of those who came were anti-war, anti-U.S./NATO intervention.

Here's a brief report on the forum on the ANSWER LA website:
http://images.answercoalition.org/cms/la/news/eyewitness-libya-event.html

The feedback from nearly everyone who came was overwhelmingly positive. Here's an email ANSWER received from an Arab American activist in Orange County: "It is the best event I ever attended. The event was really worth our time."

Making the miniscule number of counter-protesters outside the Los Angeles forum into the primary issue in a "report" to progressive people is ridiculous.

The only folks prevented from entering the forum were the few who came specifically to protest and disrupt the event. It wasn't because they were Libyan. Several Libyans and other Arab Americans participated in the event and discussion. Some were pro-war and pro-intervention, but most were anti-war.

The people who were outside the event, however, were not interested in civil discussion or even debate. They made themselves known at the event before it started by wearing Libya's old pro-monarchy flags, waving U.S. flags at people, wearing t-shirts featuring King Idris (the former Libyan monarch), and chanting against McKinney before trying to enter the forum. Some of them made threatening statements about McKinney. They chanted that Cynthia McKinney should "burn in the fire" and also made homophobic slurs at the line of college students and volunteers doing security for the event. Not one of the counter-protesters was against the U.S./NATO bombing of Libya. Not a one.

It's worth noting that the writer of the article in question stood with the pro-intervention crowd during much of the event, and was worked up in a frenzy.

Others from the pro-intervention camp, those who wanted to participate with the rest of the crowd in a civil meeting, did so and were allowed to speak during Q and A, just like anyone else. Opposing views were not censored in any way.

Several people with divergent views spoke and asked questions. It is true that the pro-intervention Libyans and others who spoke were booed at times by the crowd, but no one from ANSWER was orchestrating that. People at the event just didn't like what they had to say. It's not too surprising for pro-war voices to get booed at an anti-war forum.

Just to be clear, there is nothing wrong with keeping pro-war protesters out of an anti-war event after they state their intention to protest and disrupt the event. With several high-profile speakers on the panel, security was also a top concern.

Also, it’s a complete fabrication that anyone from ANSWER ever said anything remotely pro-Gaddafi or referred to him as "Brother Gaddafi." That just didn't happen. We have the video of the whole forum if you'd like us to prove it.

The forum was an anti-war, anti-intervention forum. Iraq war veteran Mike Prysner spoke against the war on Libya, as did others. Some speakers on the panel did espouse their perspective of pan-African unity and expressed their respect for the Libyan leader. They represent valid political currents within the Black community. Nearly every panel speaker has divergent views on one thing or another, but they were all there to do one thing—speak out against the war. We will not tell other anti-war forces what to say and how to say it. It was an anti-war meeting.

This includes Cynthia McKinney, who has now traveled to Libya twice during the NATO bombing, at great risk to her own life. She is not a pro-Gaddafi mouthpiece in any way. She is not being paid by the Libyan government, not even a dime. In fact, part of the reason for the tour is to raise funds to pay back debts incurred by traveling to Libya on these important fact-finding missions. The main thrust of Cynthia McKinney's talk at the Los Angeles forum was for self-determination for Libyans, and to urge people in the United States to oppose the U.S./NATO war. As a former elected Congresswoman, her heroism in speaking out against the war on Libya should be lauded and supported, not attacked without cause.

The "third camp" politics espoused by the anti-ANSWER article are way off base. They are out of step with people in the U.S.—who polls show oppose the war on Libya 2-to-1—and they are out of step with the people of Libya, who just had a massive 250,000 person march against the NATO bombing this past week, as bombs were dropping around them. Civilian casualties of the NATO bombing are now mounting—even the LA Times and CNN are reporting this.

The real issue is the U.S./NATO war on Libya

The issue at hand isn't one's opinion on Gaddafi—it is the war on Libya, and which side are you on?

Just as the Pentagon and press demonized Saddam Hussein before the Iraq invasions in 1990 and 2003, they have done the same with Gaddafi as a way to confuse people into being inert, seeking to prevent progressives from vigorously opposing the war.

The goal of anti-war activists in the United States right now seems pretty clear to me—we should be doing everything we can to expose the U.S./NATO war for what it is and building as much support as we can to stop it. There is nothing "humanitarian" about this war--there has never been, nor will there ever be a humanitarian intervention by the United States, NATO or the U.N. in their current forms. A short look at history confirms this: Iraq, Afghanistan, Somalia, Yugoslavia and so on.

The article posted on Daily Kos does not help build a stronger movement against the war on Libya. It attempts to do the opposite. It's beyond me why the article would chose to spill more ink denouncing ANSWER, an anti-war group, while saying almost nothing against the U.S./NATO war on Libya. Unfortunately, the article's tone is nothing new. The now right-wing Christopher Hitchens similarly (but more eloquently) attacked those of us who unequivocally opposed the Iraq war before the catastrophic U.S. invasion and occupation. Look at Mr. Hitchens now!

In general, it doesn't give anti-war folks more credibility to side with to pro-war forces and go along with demonization campaigns mounted by the U.S. and NATO to justify a war of aggression. Sure, people who are pro-war have the right to be pro-war, but anti-war activists don't have to agree with them or give them a platform on which to speak. The pro-war opinions are aired ad nauseum in the corporate media. Meanwhile, the war on the people of Libya continues to rage on. Bombs continue to drop. Civilians continue to die in this unjust war for oil and strategic regional domination.

ANSWER will continue to speak out and organize against the war on Libya. People who want to oppose the war can do so with us. We don't have to agree on everything as long as we oppose imperialist intervention and support the right of oppressed nations and people's to self determination. On July 9, ANSWER and others are organizing a march and rally in Washington, D.C. in front of the White House to demand an immediate end to the war on Libya.

One final note, the Eyewitness Libya speaking tour with Cynthia McKinney has drawn hundreds of interested people at each tour stop. It has proven to be an important forum for anti-war voices and organizers from LA to Chicago and beyond. As the bombing of Libya continues, let's hope that more people join the anti-war chorus so that we can bring an end to all U.S. wars and occupations. That should be our goal.