ANSWER solidarity statement to "Bring Down Abe!" protest in Japan 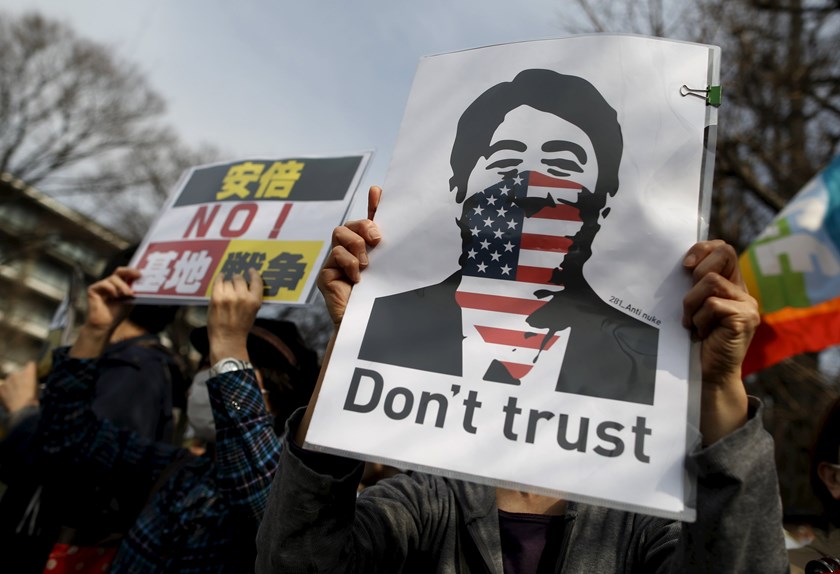 This Sunday, September 6, a demonstration will be held in Tokyo against the Abe administration's new war bills organized by the Anti-War Committee, a coalition that is part of the people’s movement in Japan.

The September 6 demonstration will be held at a very crucial moment. Despite huge protests, the Abe administration is still trying to pass its new war bills around September 11.

The main slogans of the September 6 demonstration are:

Below is a solidarity statement sent from the ANSWER Coalition to the demonstration.

We send our solidarity to the Anti-War Committee and all of the peace-loving organizations in Japan who are fighting to stop the Abe government's efforts to pass legislation allowing Japan to begin a new era of militarism, war and intervention.

The Abe government's right-wing, militaristic, nationalist and xenophobic approach to politics is repugnant not only to the other peoples of Asia but to a growing majority within the Japanese population. We know that the Abe government's efforts have been supported by the Obama administration and the Pentagon, which has reorganized the U.S.-Japanese security alliance in such a way that it poses an ever-greater threat to the people of the Asia-Pacific.

The Obama administration's so-called "pivot to Asia" is designed to put more than half of the U.S. Navy and Air Force in the Pacific region by the year 2020. This has nothing to do with the promotion of peace and everything to do with an intensified effort by the United States to gain domination and hegemony in the region.

It is critically important that the American people and the Japanese people work together to build ever-greater cooperation and solidarity to demonstrate steadfast opposition from the grassroots to the militarist policies of both the U.S. government and the Abe government in Japan. We join the people of Okinawa and all of Japan who are demanding the removal of all U.S. troops and bases.

We wish you well in your demonstrations and activities today and in the future. We were deeply inspired by the massive mobilization of more than 120,000 people on August 30 and we remain optimistic that the people's movement in the United States and Japan can rise to the occasion and defeat the efforts of the war makers in both of our countries.