March in Washington, D.C., demands an end to drone warfare 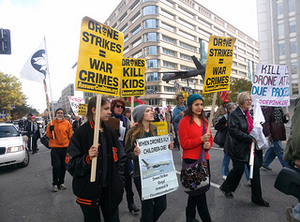 The ANSWER Coalition joined CodePink and other anti-war organizations on Nov. 15 for a march from the White House to General Atomics in protest of the U.S. government's use of drones. The protest was the kick-off event for a weekend of anti-war activities focusing on drone warfare, including the 2013 Drone Summit.

View a slideshow of photos from the demonstration below