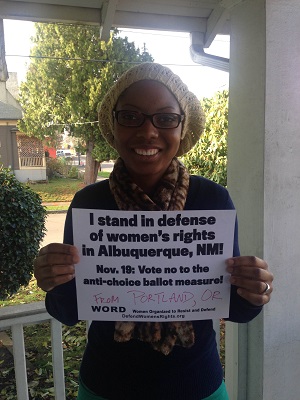 People from all over the country submitted their photos to show solidarity with the women of Albuquerque.

The people of Albuquerque, N.M., on Nov. 19, defeated an unconstitutional anti-choice initiative that had been put up to a vote on a special election ballot. Out-of-state groups, Operation Rescue and Survivors of the Abortion Holocaust, known for their hateful fear tactics, moved to New Mexico specifically to further their agenda, which is to ban abortions at all stages of pregnancy in every state. In Albuquerque, they chose to begin their strategy by attempting to ban abortions after 20 weeks of pregnancy.

This initiative campaign was unique. It was the first time the anti-choice movement had tried to restrict abortion at the municipal level. Had it passed, the abortion ban would have begun a very long and expensive legal battle.

Luckily, the proposed ordinance did not make it that far, as the city voters rejected the ban with a large margin: 54.75 percent of votes cast opposed the ban compared to 45.25 percent in support. This was only made possible because of hard-working organizers who banded together all across the city in a very successful get-out-the-vote campaign from the pro-choice individuals and organizations.

Operation Rescue and Survivors of the Abortion Holocaust were not concerned with the health and well being of New Mexican families. Rather, they wanted to ban a very rare procedure (late term abortions account for only 1.5 percent of all abortions in the United States) and use it as a precedent to further erode a woman’s right to choose.

They targeted Albuquerque because the only two providers of abortions after 20 weeks of pregnancy in New Mexico are in Albuquerque. One of the clinics in Albuquerque, South Western Women's Options, is one of only four clinics in the United States that provides abortions after 26 weeks. Two of the doctors that operate in South Western Women’s Options Clinic were colleagues of Dr. George Tiller, a late-term abortion provider who was assassinated by an individual affiliated with Operation Rescue in Kansas in 2009.

Mobilization of the people turns tide

In the final weeks leading up to the special election, both sides of the issue put forward efforts to either pass or stop the proposed ordinance. Proponents and opponents raised a combined total of $1,000,000 for their campaigns. Pro-choice individuals and organizations in Albuquerque worked tirelessly to mobilize voters to defeat the ballot measure, as it was not indicative of our city’s views.

A coalition of women’s groups called Respect ABQ Women was immensely active and gained the support of thousands of people in the Albuquerque metro area. They were successful in building the resources to run a solid grassroots get-out-the-vote effort with the help of many dedicated youth, including members of WORD, who carried out door-to-door canvassing shifts as well as going to do outreach outside of polling locations to help combat the presence of anti-abortion protestors. The door canvassers, working for Grassroots Campaigns, Inc., on behalf of Respect ABQ Women, knocked on 54,402 doors in a time span of six weeks, surpassing their goal by nearly 1,000 doors.

When University of New Mexico and Central New Mexico Community College were denied polling locations, Feminist Majority Foundation (part of the Respect ABQ Women campaign) organized free trolley rides from campus to the polls. It took a whole army to defeat this measure. It was thanks to the hard work of organizers all over the city that we were able to block this hateful attempt to restrict women’s reproductive rights from becoming law.

WORD (Women Organized to Resist and Defend) organized a banner drop over Interstate 40 (one of the two highways in Albuquerque) and also hosted a community forum and strategy meeting with numerous women’s groups that was open to the general public. WORD has been active in the struggle since late summer when we mobilized Albuquerque residents to attend city council speak outs and held a successful demonstration shortly before it was decided that the ordinance would be put to a vote. WORD in Albuquerque postered and leafleted in neighborhoods across the city, building momentum amongst and encouraging people to get involved in the struggle to defend women's rights.

WORD also organized a nationwide photo campaign where people from all over the country submitted their photos to show solidarity with the women of Albuquerque. Click here to see the gallery of photos.

The anti-choice, anti-abortion forces in Albuquerque mainly focused on extremely ineffective, fear-based tactics that centered around the idea of abortion and morality, as opposed to working to get out the vote. One of the anti-choice extremists that came to Albuquerque was Cheryl Sullenger, who pled guilty to conspiracy charges relating to the bombing of an abortion clinic and served two years in federal prison. It was people like her who were the authors of the ballot initiative, using language that even confused their own supporters.

Advocates of the proposed ordinance ruthlessly held signs depicting graphic photos of dead fetuses in public places, even going so far as handing out their propaganda to young trick-or-treaters and driving around the “Truth Truck,” a large truck with billboard covered with photos depicting dead fetuses and slogans urging viewers to “Vote for Protecting Unborn Babies!” Such tactics backfired, as they did not sit well with the residents of Albuquerque. It was disrespectful, incredibly offensive, and exposed as a lie the pro-family values the anti-abortion forces claim to promote.

The outcome of this special election is a significant achievement. All in all, the voter turnout was significantly higher than that of our mayoral election, with 85,354 votes cast on the issue (as opposed to the 70,361 that turned out for the mayoral election in October). Some 58 percent of the votes were cast by women. We worked hard to win this election and succeeded despite the fact that city council blatantly tried to repress votes by denying a polling location at the college campuses in Albuquerque, but allowed four churches to have poll locations on their premises, two of which openly advocated for voting for the proposed ordinance to their congregations.

This victory proves that a mass mobilization led by young activists can defeat anti-choice forces that use tactics of shaming and antagonizing communities. We cannot say for sure if the anti-choice forces will attempt these same tactics in the future, but we have proven that they can be defeated and have a successful model that can be used nationwide in the future.

This campaign proves that the struggle against sexist, anti-woman groups and individuals is indeed still alive and well. Our side won with science, education and mass mobilization of the public, which was far more effective than the opposition’s fear tactics, and shaming and judging of women in a campaign of misinformation.

We need to carry the momentum created in this struggle onward toward real progress for women and all working people all over the world. It does not end here, but we are better prepared for what comes next.