At 24th & Mission Sts., SF
Bring your banners, placards and join us in a community speak-out 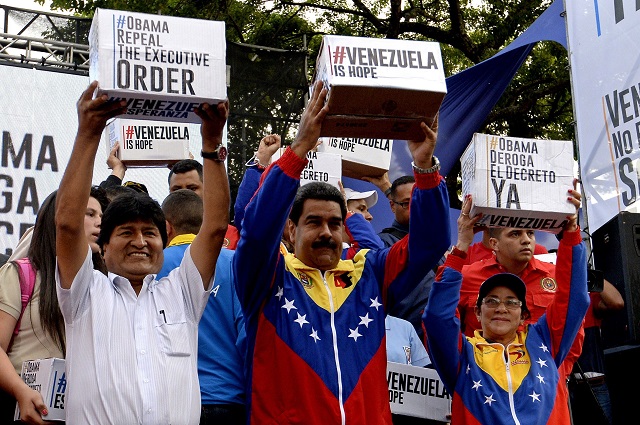 Despite the U.S. government's attempts to isolate Venezuela and declare the Bolivarian Revolution an "extraordinary threat" to the United States, that false claim backfired on Washington in a major way, leading up to and during the Summit of the Americas.

More than 13 million signatures were collected in Venezuela, throughout Latin America and worldwide, to defend Venezuela and to tell the U.S.: "Obama Repeal the Executive Order Now!"

But the danger of U.S. destabilizing efforts and economic sabotage are not over. Just before the Summit, Obama traveled to Jamaica —the first U.S. president to visit that country in more than 30 years—as part of the U.S. objective of breaking up the strategic Caribbean-Venezuela alliance known as Petro-Caribe. And although Obama was forced to admit that Venezuela is not a threat, his Executive Order still remains, with sanctions and further pressure against the Caracas government.

The official Summit, with heads of state of 35 countries of the western hemisphere included an historic first: Cuba's presence despite decades of U.S. opposition. A People's Summit was held parallel to the Summit of the Americas, in which progressive movements met to strategize to continue the process of social and economic integration of Latin America and the Caribbean.

Read here about the People's Summit

An International Day of Solidarity with Venezuela has been called, to let Washington know that the Bolivarian Revolution is not alone!

There will be public actions in many countries. The organizations signed below in the Bay Area will join the International Day of Solidarity, with a rally in the heart of the Mission! Bring your placards, banners and join us in a Community speak-out.