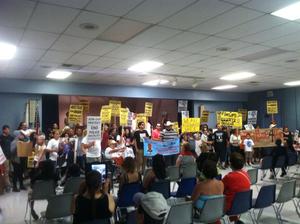 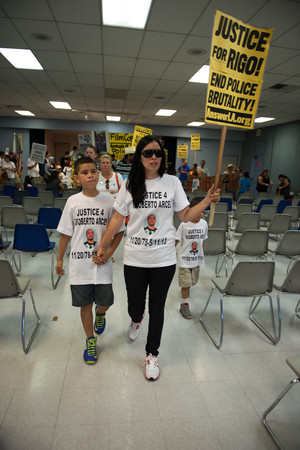 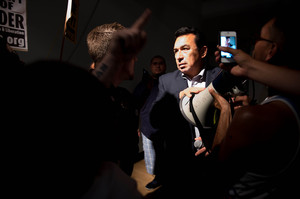 A spirited march demanding justice for Rigoberto Arceo, a community member murdered in cold blood by LA County Sheriff deputies, took over parts of Florence Ave and Atlantic Blvd in Cudahy during rush hour traffic on June 26th, loudly chanting demands for justice and the jailing of his killers. The march - led by Yoana Arceo, Rigo's fiancée, organized by the ANSWER Coalition and supported by Nida's Ridas, United Survivors of Anaheim and other families of police violence victims - took place just a few weeks after the May 11 police killing.

The demonstration began with a rally at the scene of the murder, just a few doors down from Rigo’s home. Genevieve Huizar, whose son Angel Diaz was murdered by police in Anaheim last year, expressed her support for the Arceo family and the need for all those affected by police violence to fight for justice together. ANSWER Coalition organizer Victor Quintero urged attendees to participate in the upcoming July 21 statewide unity march against police brutality in Anaheim, which is supported by over 30 families of police brutality victims.

Speakers at the rally also explained the circumstances of Rigoberto Arceo’s murder. Rigo was getting a ride home in a car driven by his sister Maria Arceo after trying to break up a fight in his neighborhood. As they parked three doors from his house, a deputy flashed his lights and began shouting. Rigo was then shot in the chest after complying with orders to step out of the car and put his hands in the air. He was taken to St. Francis Medical Center, where he worked as a biomedical technician, but hospital staff was unable to resuscitate him.

The official police account outrageously claims that Rigoberto rushed at the deputy and attempted to take his gun. This boiler-plate lie is contradicted by two eyewitnesses, Rigo's sister Maria and neighbor Armando Garcia, who was in his front yard when the murder took place.

Rigo was a prominent and respected community member. In a June 22 LA Times article Brother Richard Hirbe, the director of spiritual care and medical ethics for the hospital, expressed the sense of shock and disbelief Rigoberto's colleagues felt at seeing him that night, saying "The heart of the hospital stopped for a moment". Hirbe also noted Rigo's status as a role model devoted to his family, adding that "A lot of the younger guys started to emulate him".

Marchers then took to the streets and began marching towards a monthly Town Hall meeting, where city authorities were planning on misinforming community members about Rigo’s murder. Favorite chants included “LASD, you are guilty!” and “Power to the people, we are all Rigo!”

Arriving shortly before the Town Hall meeting was scheduled to begin, protesters formed a picket line and continued chanting and speaking out. Despite the heat, people were determined to keep moving and maintain the high level of energy and determination

When the doors opened over a hundred demonstrators followed Yoana Arceo into the meeting, chanting and seizing control of the stage and podium inside the community center. Protesters held banners and signs demanding that racist, killer cops be held accountable.

Yoana and her youngest son chanted into the microphone at the podium - taking the place designated for City Manager Hector Rodriguez that night. Hector Rodriguez is the newest City Manager in Cudahy, a town rocked by tremendous scandals in recent years, where public officials were caught accepting large bribes and stealing from the city funds.

Protestors continued to chant as Hector Rodriguez rushed the demonstrators, assaulting and attempting to wrest one of the megaphones out of an activist's hands. Demonstrators responded by protecting the activist and pulling Rodriguez to the side who arrogantly proclaimed to have a right to speak. After being told that the protestors demanded that the meeting be canceled he became furious.

Rodriguez then stormed to the podium where deceased Rigoberto Arceo's youngest son was standing on a chair to chant into the microphone. Once Rodriguez reached Arceo's son he assaulted the small child by attempting to rip the chair out from underneath him to get a microphone. Protestors confronted him for assaulting the murdered man's son and forced him to leave the stage area. Shortly thereafter the Los Angeles Sheriffs and city officials announced that the meeting had been canceled.

Reflecting on the action Yoana Arceo explained, "I decided it was necessary to march on this town hall meeting because the Mayor of Cudahy had promised me that the murder of my husband would be investigated and that there would be justice. The Mayor has not said one word to me since then and the officers who murdered by husband are still out on the streets, ready to kill another innocent person. But when I got to the meeting to raise our collective voice in protest I was shocked to see that the City Manager was arrogant enough to assault my son after his cops murdered by husband."

ANSWER Coalition organizer Doug Kauffman added, "Not only should the cops who murdered Rigo be arrested immediately but City Manager Hector Rodriguez should be immediately fired for his role at this peaceful protest in attempting to assault and intimidate protestors, and worse, the Arceo family, who have already suffered enough at the hands of the political establishment of Cudahy. This justice movement will continue and not only will the killer cops be brought to justice but Hector Rodriguez has earned himself a place on our list. After meeting him it became quite clear why killer cops are not having charges brought against them by the city - it is a city run by criminals."

Yoana, the ANSWER Coalition and countless other demonstrators marched out of the community center triumphant, continuing to raise the demand that the officers who murdered Rigo Arceo be immediately put in jail.