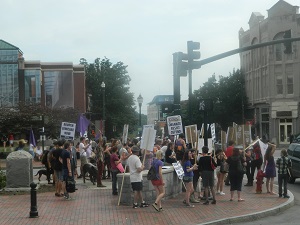 On Aug. 8, women and allies in Asheville, N.C., gathered in Pack Square to protest sweeping abortion bans in the state and the closing of our last remaining clinic, Femcare, which is located in Asheville.

The opening rally included chanting, "When women's rights are under attack, what do we do? Stand up fight back!" Several speakers, including Emily Parker representing the Asheville chapter of WORD – Women Organized to Resist and Defend – the organization that initiated the event, and several people who shared personal stories and talked about the importance of abortion access. After hearing from some very powerful speakers, the chanting continued.

Following the rally, we marched through the downtown area, drawing people out into the streets to take photos and cheer us on. The community's support was overwhelming. At one point, protesters were forced to spill into the streets because there were too many of us to fit on the sidewalk. When we circled back around to the starting point, we continued to chant. A woman from the Open Umbrella Collective spoke and discussed ways to donate to Femcare to help them reopen.

WORD Asheville is encouraged by the support this call to action received, and thrilled to see women and others fighting back against these attacks on our reproductive rights! We pledge to continue the struggle until Femcare is reopened and to demand reproductive rights for women across the state and nationwide in the face of a growing right-wing offensive on our rights.

Next, WORD Asheville is joining the national call for actions Aug. 23-26 for Women's Equality Day under the banner "We Won't Go Back -- We Will Fight Back!" Join us on August 25 in downtown Asheville. Read the call to action here and see a list of demonstrations taking place nationwide.