The Asia-Wide Campaign against the U.S.-Japanese Domination and Aggression of Asia held its 4th General Assembly in Kyoto, Japan, over the weekend of Feb. 27-28.

Participants to the 4th General Assembly included activists and organizers from Japan, South Korea, Taiwan, Indonesia and the Philippines. The ANSWER Coalition was invited to send a representative from the United States.

The AWC was founded in 1992 as a regional alliance to oppose the overseas deployment of the Japanese SDF (Self-Defense Forces), and has since initiated and participated in many struggles against U.S. and Japanese imperialism in several different Asian countries.

Each region represented at the General Assembly provided a report on the political and economic situation in their area, as well as updates on the anti-imperialist and pro-people activities they have been involved with since the 3rd General Assembly in 2009.

The following is a report written by the ANSWER Coalition representative at the General Assembly, Chris Garaffa:

Reports from each region at the AWC conference highlighted the increasing importance of united, internationalist resistance to the expansion of the U.S. military presence in Asia, and opposition to U.S. and Japanese imperialism, in Asia and worldwide. 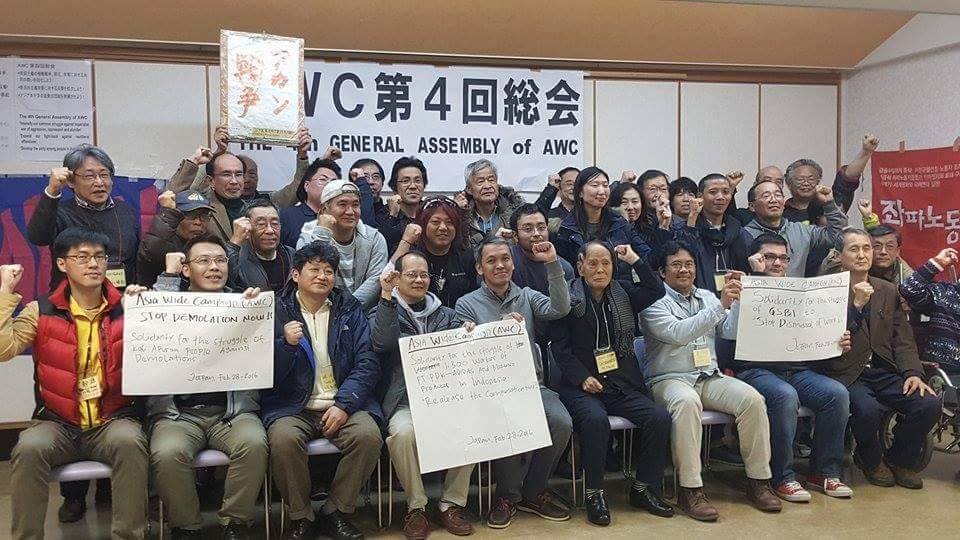 Announced in 2011, the so-called “Asia Pivot” focuses the strategic orientation of the U.S. military and diplomatic entities towards the Asia-Pacific region in an attempt to counter China’s growing influence in the world economy and Russia’s impact on the world political scene. China has the second largest economy in the world, only behind the United States.

As massive troop deployments in the Middle East draw down, the Pentagon is focusing on moving troops and equipment into East Asia and the Pacific Rim. The Pentagon’s 2014 Quadrennial Defense Review states, “By 2020, 60 percent of U.S. Navy assets will be stationed in the Pacific … The U.S. Air Force already stations assets in the Asia-Pacific region, including tactical and long-range strike aircraft, and will move additional forces such as ISR [Intelligence, Surveillance and Reconnaissance] assets to the region.” The realignment towards the Asia-Pacific region reflects U.S. imperialism’s desire to counter China and Russia.

What the Asia Pivot means for people in Asia is an increase in the number of U.S. bases, service members and overall military action in the region. The U.S. government has been seeking to strengthen and create partnerships with the governments of Japan, South Korea, the Philippines and other Asian countries in order to cement this anti-China alliance that also targets North Korea. 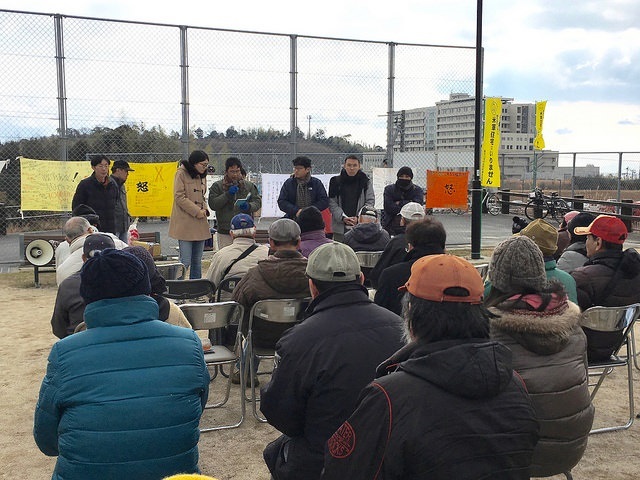 Of particular importance was a presentation by Junji Kjawano, a city councilmember in Nago, on Okinawa Island. Okinawa has been home to large U.S. bases since the end of World War II. Okinawa Island houses 32 U.S. bases and facilities that take up 18 percent of the land of the island. Okinawa is perhaps the most infamous of the U.S. bases in Japan. In 1995, a 12-year-old girl was kidnapped and raped by three U.S. servicemen. Following the attack, the people of Okinawa rose up. More than 85,000 people took the streets to demand justice. The three servicemen received seven-year sentences. The protests also took aim at the existence and expansion of the bases in Okinawa themselves.

Formerly under complete U.S. military control until 1972, the people and government of Okinawa are fighting against the use and expansion of the U.S. base there. In preparation for an expanding presence, the U.S. military is expanding bases across Japan, including in Okinawa. The Governor of Okinawa Prefecture, Takeshi Onaga, revoked the land reclamation permit needed for this construction in October 2015. The Okinawa government has since been involved in a legal battle, filing multiple lawsuits in federal courts to halt construction at the base.

In the week after the conference, AWC members and delegates from other countries visited many sites of important struggles in Japan. One such location is Iwakuni, a city of 145,000 people and home to the Marine Corps Air Station Iwakuni. The U.S. military is in the process of relocating over 4,000 U.S. servicemembers and their families to Iwakuni, along with 59 fighter jets from the base at Atsugi, including a new fleet of F35 fighters scheduled to deploy in 2017. The people of Iwakuni have been struggling against the base and its expansion for many years.

The new construction and expansion is part of a larger realignment plan initiated in the 1990s after strong local opposition to the growing base in Okinawa.

A referendum held in 2006 saw more than half of Iwakuni voters oppose new construction at the base. Iwakuni residents hold regular protests against the base on the 1st, 11th and 21st of each month. AWC delegates joined the protest on March 1. The protest began with a rally on Mt. Atagoyama. For over a decade, construction has dug up and leveled Mt. Atagoyama, leaving it at a fraction of its former height. The dirt removal for the expansion of the base also forced the relocation of a religious shrine to a lower level of the mountain. At the protest, residents and city councilmembers opposed to the construction shared the latest news in their community organizing and legal motions.

Across Iwakuni, many homes have yellow flags outside them signaling their opposition to the base under the banner: “No More Consolidation of the Iwakuni Base!”

After the weekend conference, AWC members and delegates visited the workers of iWAi, a commercial garbage company in Kyoto. The workers have been occupying the building for six months, since September of 2015. In May 2015, the President of the iWAi company was arrested for illegally dumping garbage. Employees became nervous about the future of their jobs, and demanded retirement plans and back wages owed to them. After being ignored, they unionized as the iWAi chapter of the Kyoto Local Union (KLU) to begin the collective bargaining process. Throughout the process, company management negotiated in bad faith, making promises that were not kept, and attempting to split the workers and intimidate them into leaving the union. On the morning of the date of the third collective bargaining session in September, the president left his home and disappeared. The workers immediately began their strike and occupation with the support of KLU and other local unions.

“We think our win is guaranteed,” iWAi chapter President Yamata told the AWC visitors. “With the cooperation of the KLU, we’ve been able to keep the occupation going. I’ll never give up and I’ll keep struggling with our members.”

In addition to their occupation, the iWAi workers are also in court attempting to re-acquire a permit to operate that the city government revoked after the the occupation started, and to liquidate the assets of the company president to pay for a retirement fund, overtime pay and months of pay for striking workers.

“NO” to the amendment or repeal of Article 9!

Following the defeat of imperial Japan in World War II, Article 9 of the rewritten Japanese Constitution expressly forbade the Japanese military from engaging in offensive war:

“(1) Aspiring sincerely to an international peace based on justice and order, the Japanese people forever renounce war as a sovereign right of the nation and the threat or use of force as means of settling international disputes.

"(2) In order to accomplish the aim of the preceding paragraph, land, sea, and air forces, as well as other war potential, will never be maintained. The right of belligerency of the state will not be recognized.”

In the decades since, as Japan has again become part of the world imperialist system as an ally of the United States, Article 9 has been reinterpreted to allow the Japan Self-Defense Forces (SDF) to be well-equipped in preparation for so-called “self-defense.” As of 2014, the government’s interpretation expanded to allow for mutual self-defense in case of an attack on Japanese allies in the region.

In 2015, the Japanese government under Prime Minister Shinzo Abe is attempting to expand further this loose interpretation of Article 9, to the point of repealing the Article altogether, with cooperation and encouragement from the U.S. government. Mass protests held in September drew over 120,000 to Tokyo to oppose Abe’s new legislation. The U.S. government is in full support of proposed legislation to allow Japan to be fully re-militarized, as the SDF would serve as an effective ally in the Asia Pivot, and U.S. maneuvers against China and the Democratic People's Republic of Korea (North Korea).

Internationalism is the key to anti-imperialism

The message of participants at the 4th General Assembly was clear: a united, strong, international anti-imperialist movement is necessary to fight back against increasing U.S. threats in Asia and across the world.

As AWC-Japan activists prepare to protest the upcoming G7 meeting in Ise-Shima, and as organizers and activists across Asia continue to fight against the building and expansion of U.S. military bases, progressive and anti-war people in the United States must continue our struggle against U.S. imperialism at home.