The Colonial "Axis of Evil" prepares for the invasion of Libya 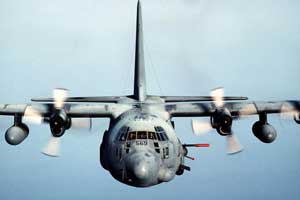 The AC-130 gunship used by the U.S. military for ground attacks in Libya

The stage is now set for the imperialist invasion of Libya.

The former colonizing and enslaving powers of Africa—Britain, France and the United States—have committed themselves to the ouster of the Libyan government.

Frustrated that the NATO bombing campaign has failed to secure a victory for the anti-Gadaffi rebels, the main NATO powers are preparing a dramatic escalation of the war. They hope the threat of escalation will convince Gadaffi and his associates to leave power as the threat of a land invasion in June 1999 led Milosevic to capitulate and allow NATO forces to take over Kosovo. Or, as an alternative, they will launch a military invasion of the country.

“… [I]t is impossible to imagine a future for Libya with Qaddafi in power,” wrote Barack Obama, Nicolas Sarkozy, and David Cameron in a joint article published simultaneously in the New York Times and several European newspapers on April 15.

Their stated pretext to “protect civilians” in Libya’s civil war (Resolution 1973 passed by the U.N. Security Council on March 17 with Russia, China, Germany, Brazil, and India abstaining) has given way in this latest public proclamation to their actual intention to replace the Libyan government with a new proxy regime in the country that holds the largest oil reserves in the African continent.

“No political settlement in which the dictator remains in place will work. The West and its partners must be ready to maintain political, economic and military pressure until he is gone,” states the New York Times in its April 15 lead editorial.

Do not be fooled by the anti-dictatorial motivation of the New York Times. When the CIA and British intelligence overthrew Iran’s democratically elected government of Dr. Mohammad Mossadegh and replaced it with the dictatorship of the Shah, the New York Times editorialized: “Underdeveloped countries with rich resources now have an object lesson in the heavy cost to be paid by one of their number which goes berserk with fanatical nationalism.”

Mossadegh had earned the label of “fanatic” because he had dared nationalize the Anglo-Iranian Oil Company (aka British Petroleum) and use the profits of Iran’s oil to bring the country out of immense poverty.

All the targets of imperialist invasion and “regime change” strategies are fully demonized prior to aggression. From Iran in 1953, Guatemala in 1954, the Congo in 1961, Grenada in 1983, Panama in 1989, Yugoslavia in 1999, Afghanistan in 2001 to Iraq in 2003, the process of selective demonization of leaders is a precursor to aggression. The motives of the invaders are pure and noble. The bombs they drop are smart. They only kill bad people who are the enemies of freedom.

At these moments, the money-gouging corrupt politicians of both sides of the aisle in Washington, D.C.—from Tea Party Republicans to most Democratic Party politicians—mainly put aside all differences to join the chorus of the holy condemning the targeted demon as the troops are assembled, the war planes take to the skies and the cruise missiles crash into their targets. They are patriotic to the Empire and realize that their privileged and pampered employment as the “people’s representatives” can be quickly ended if they resolutely defy the war makers and their mass media propaganda machine. They, too, can be demonized if they step too far out of line.

The people of the United States do not want this war. They want the war in Afghanistan and Iraq—two other wars for Empire—ended now. They can see through the lies of the government that says the country is so broke that tens of thousands of teachers, nurses and other public sector workers must be fired. Yet the same government, pursuing a global imperialist foreign policy that benefits the biggest banks and oil corporations, has limitless funds to invade and occupy the lands of other working people.

If you received this statement from a friend by email or via a social networking website, click here to sign up to receive analysis and action alerts from the ANSWER Coalition.

Please show your support for the work of the ANSWER Coalition by making an urgently needed donation.