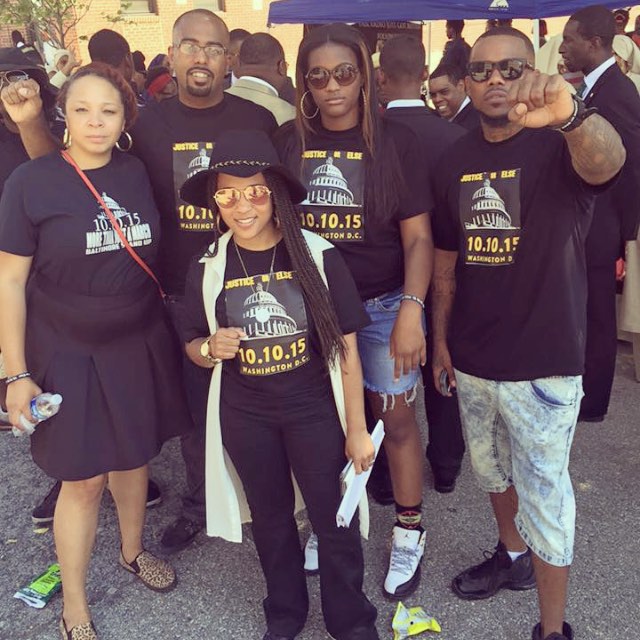 The uprising in Baltimore during late April and early May of this year was an inspiring shot of hope in the U.S. The militancy, courage, compassion, and organization displayed in the uprising combined into a remarkable show
of the strength of poor and oppressed people.

While the occupation of Baltimore by the National Guard ended and the large-scale protests and marches drew to a close in mid-May, the movement against police brutality and the struggle for justice for Freddie Gray hasn’t died down. Instead, over the summer new activists and organizers have been trained, alliances have solidified, and activist networks have grown in sophistication.

The determination of the people of Baltimore to continue fighting has resulted in several recent victories, but these victories have been accompanied new challenges, including the targeted repression of activists.

The first victory is that the six cops indicted for the arrest and murder of Gray will be tried in the City of Baltimore. The cops’ defense attorneys unsuccessfully argued that media coverage of the events around Gray’s death and the general mood in the city would result in a biased jury pool.

The second victory is a $6.4 million settlement in the civil suit brought against the City of Baltimore by Gray’s family. While the settlement doesn’t include any statement of judgment, it will spare Gray’s family from what would likely be a drawn out and emotionally taxing trial.

These victories are accompanied by additional challenges in the struggle, however. The primary challenge is a campaign of repression against leading activists and organizers. Liberation News spoke recently with two young community leaders, both of whom have faced different types of retaliation by bosses and the state. Several sources have verified that there is an “arrest on sight” list circulating among the Baltimore police.

Orlando “Magik” Gilyard emerged as a leader in the uprising when he made a short online video refuting the Baltimore police’s ridiculous propaganda that gangs in the city had “united to take-out law enforcement officers.”

Gilyard, a member of the Bloods, was at work when he heard this news. While he was on a break he recorded a short video that quickly went viral. Later, he appeared on Channel 11 News to tell the truth about the situation: the gangs had reached a truce so they could work together to support the protest movement. That video also went viral.

When the videos spread, Gilyard, who worked for Parkhurst, the company that provides food service for Loyola College, was suspended. He was eventually fired for “code of conduct” violations. Together with his union, Gilyard is taking Parkhurst to court.

This injustice hasn’t stopped Gilyard, who said that it “pushed me into doing music full-time and activism full-time” (check out his music here). He is currently building for the Justice Or Else march with the Nation of Islam, which will take place in Washington, D.C. on Oct. 11.

Gilyard told Liberation News that many activists in Baltimore have lost their jobs in retaliation for the uprising, and this was quickly confirmed by Kwame Rose.

Rose became a leader somewhat reluctantly. It began a few days into the uprising, on April 29, when Geraldo Rivera of FOX news showed up to cover the street protests that were taking place nightly. Rose—who didn’t know who Rivera was—interrupted his broadcast and confronted him for his biased reporting.

That video went viral too—against Rose’s wishes—and as soon as it did Rose was fired from his job as a doorman at the Marriot Waterfront, where he had worked for two years.

Since then Rose has become one of the central leaders in the struggle, and this has subjected him to several rounds of police repression. One of the first rounds took place in July, when Baltimore police pulled him over for having “illegally tinted windows,” even though his car did not have illegal tints. Instead of merely harassing Rose and issuing him a ticket, however, police immediately towed his car. The Baltimore police commissioner has publicly promised to get Rose his car back, having acknowledged the officer’s wrongdoing. But when Liberation met with Rose on Sept. 11 he still didn’t have it back.

Then came the Sept. 2 protest outside of the first court appearance of the cops who killed Gray. The police were trying to box protesters into a corner. The people wanted their presence known and so they decided to block traffic and hold down an intersection. In blatant disregard for the safety of protesters, passersby, and motorists the police continued to wave vehicles through.

Rose went out into the street to help protesters get away from the danger, and that’s when a pick-up truck hit him. He immediately fell to the ground. When several friends went to pick him up the police rushed him. There is video of his arrest circulating which shows Rose, clearly in pain, being treated roughly by multiple cops. They charged him with resisting arrest, disorderly conduct, and 2nd degree assault. The police are quite outrageously alleging that Rose kicked an officer in the face as they put him into the prisoner transport van. Rose has a pre-trial conference in early October.

This repeated harassment hasn’t slowed Rose down either, however. He was back in the streets the very next week, protesting outside of the court where lawyers argued over where the cops’ trial would take place.

On Sept. 9, a few days before the next protest, the police arrested Pastor Westley West at his church, Faith Empowerment Ministries. The false charges that they threw at West stem from the Sept. 2 protest. They are charging him with attempting to incite a riot, malicious destruction of property, false imprisonment, failure to obey, disturbance of the peace, and disorderly conduct.

Police were in full force on Sept. 13 as the killer cops were trying to get a change of venue for their trial. At 9 am that morning the police arrested protester Randy Gloss. Her crime? Holding a sign. The cops formed a perimeter around her and arrested her.

When Rose objected to the arrest, an officer pointed at him and said, “Yeah, get him, too.” At that point, Rose began retreating and he was able to make it away safely.

The cops are afraid of people asserting their power by being visible in the streets. “They’re scared of us protesting,” Rose said. “That’s why they offered that settlement.”

The cops are afraid of any large groups forming in the city—other than tourists and shoppers, of course. Gilyard says that the police have been shutting down music shows across the city.

None of this has deterred the movement at all. “I already know what’s in store, so I don’t even worry,” Gilyard said. “I’m not stopping, man.”