Behind the Saudi-Israeli push to destabilize Lebanon 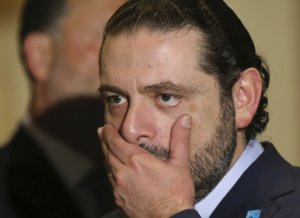 Only a day after major ISIS defeats in Syria and Iraq indicated that fighting may be winding down, an extraordinary series of events raised the danger of a new war, this time against Lebanon. These events began on Nov. 4 when Saudi Arabia destabilized Lebanon’s government by forcing Prime Minister Saad Hariri’ to resign, and led to the Saudi government false claim on Nov. 7 that Lebanon had “declared war” on that kingdom.

Secret documents made public by Israeli TV Channel 10 indicate that this provocative war scenario was coordinated by Saudi Arabia and Israel to instigate a new Middle East war, with Lebanon the target, vilified as a proxy of Iran. This provocation follows a huge Israeli military exercise held in September simulating an invasion of Lebanon designed specifically to target the Lebanese group Hezbollah. This was Tel Aviv’s largest military drill in 20 years, involving all branches of the Israeli military.

While Washington has branded the Lebanese group Hezbollah “terrorist,” progressives in the Middle East see the group as a defender of Lebanese sovereignty. Twice, in 2000 and 2006, it kicked Israeli troops out of Lebanon. Hezbollah has fought alongside the Syrian government not only to prevent the dismemberment of this neighboring Arab country, but also to prevent ISIS from invading Lebanon and terrorizing the people there. Iran, also vilified by U.S. imperialism and its clients, has provided crucial political, material and military support needed to defeat ISIS.

The events are as follows:

On Nov. 3, the last ISIS strongholds in Iraq and Syria fell. Both Saudi Arabia and Israel seek to dismember Syria, and have assisted ISIS.

In a measure never seen before in the international arena, on Nov. 4 under orders from the Saudi regime, Lebanese Prime Minister Saad Hariri announced from Saudi Arabia on Saudi TV his resignation as PM. He assailed Iran for interfering in Lebanon, and claimed that Hezbollah was trying to assassinate him.

Hours later, Ryadh said it intercepted a Yemeni-fired missile over its capital. For years the Saudi regime, armed by the U.S., has been bombarding the people of Yemen, indiscriminately killing civilians.

While the Yemenis say the missile they fired was made in Yemen, Saudi Foreign Minister Adel bin Ahmed claimed, “It was an Iranian missile, launched by Hezbollah,” and constituted “act of war by Iran.”

On Nov. 7, the Saudis, furthered the escalation, and accused Lebanon of “declaring war” against it.

At the same time, in a bid to consolidate power, the Saudi regime arrested hundreds inside the kingdom on charges of corruption, including some of the country’s most high-profile princes and businessmen.

The corporate media has long given the impression that Israel and Saudi Arabia are on opposite sides. That is for public consumption. Both regimes are propped up and armed by Washington so that they can slam liberation struggles and independent governments in the Middle East and keep this oil rich area “safe” for Exxon Mobil and JP Morgan Chase & Co.

Now there is a smoking gun showing that Israel and Saudi Arabia are working together to bring war to Lebanon.

On Nov. 7, Israeli Channel 10 news published a leaked diplomatic cable sent to all Israeli ambassadors throughout the world concerning the above events. The classified embassy cable, written in Hebrew, shows that Tel Aviv and Riyad are deliberately coordinating to escalate the situation in the Middle East. These documents provide the first proof of direct collaboration between these two U.S. clients.

The cable was leaked by Barak Ravid, senior diplomatic correspondent for Channel 10 News. The communiqué, he said, was sent from the Israeli Ministry of Foreign Affairs in Jerusalem on Nov. 6 to all Israeli embassies. It instructed Israeli diplomats to to do everything possible to rev up diplomatic pressure against Hezbollah and Iran. The communication urged support for Saudi Arabia’s war in Yemen, and for Israeli diplomats to appeal to the “highest officials” in their host countries to expel Hezbollah from Lebanese government and politics,” according to zerohedge.com.

Lebanon’s unwieldy political system is easily destabilized. Put together by the French colonizers in 1925, it mandates that government posts, and parliamentary apportionment, be based upon the country’s different religious groupings. The current government, with Hariri as MP, and Hezbollah’s Michel Aoun as president, took office last year. It ended years of government deadlock, and last month it produced Lebanon’s first budget since 2005.

Hariri, who has dual Saudi-Lebanese citizenship and financial interest in Saudi Arabia, is regarded as “the Saudi’s man” in Lebanon. The irony of a Lebanese PM railing against Iran for interfering in Lebanon’s affairs when he just resigned in Saudi Arabia on Saudi TV reading a Saudi-written statement has not been lost on anyone.

Lebanon’s President Michel Aoun has announced that he will not decide whether to accept or reject the resignation of Prime Minister Saad al-Hariri until Hariri returns to Lebanon to explain his reasons. Hezbollah leader Sayyed Hassan Nasrallah has called on the people of Lebanon to remain calm.

Why is Hezbollah being targeted?

Israel, which shares a border with Lebanon, has long wanted to contain Lebanese sovereignty and even to annex its territory. The Israeli military bombed southern Lebanon for decades from land, sea and air. In 1982 a massive Israeli invasion killed tens of thousands of Lebanese civilians, while Israeli troops occupied southern Lebanon for 18 years. In 2006 Israel bombs targeted Lebanon’s civilian infrastructure and fighter planes peppered the south with a million cluster bombs that still kill and maim.

Israel seeks to destroy Hezbollah because it is a formidable fighting force, and the only group that prevents Israel from doing as it wills in Lebanon. Hezbollah fighters and their allies kicked Israeli troops out of Lebanon in 2000, ending the 18-year occupation, and repelled an Israeli ground invasion of Lebanon in 2006, forcing it to retreat.

This week’s dangerous and provocative developments seek to counter the defeat of ISIS in Syria and Iraq with war in Lebanon. Whether imperialism and its agents will be able to do this, however, is far from certain. The beleaguered people of the Middle East have been inspired by the victories against ISIS, and remain determined to fight for their rights.