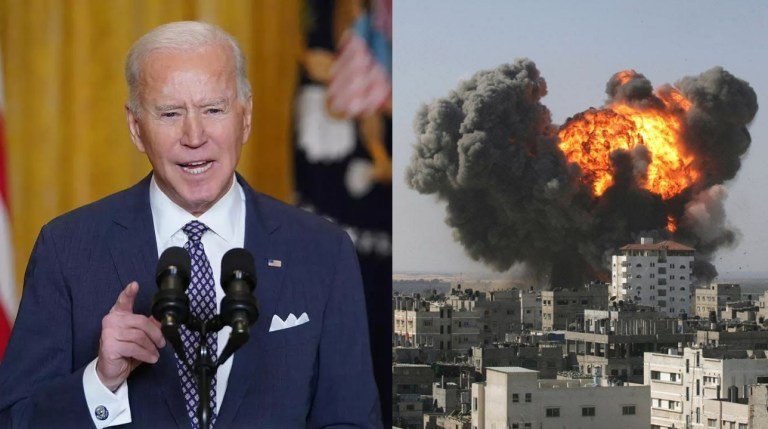 In yet another act of lawlessness and commitment to the despised doctrine of “endless war,” President Joe Biden ordered airstrikes on June 27 attacking Syria and Iraq. This is his administration's second time this year bombing Syria, and his first for Iraq. U.S. officials said the airstrikes were carried out by Air Force F-15s and F-16s using “precision-guided munitions” targeting facilities it said were being used by “Iranian-backed” militias that were “mounting drone attacks against U.S. troops.” In typical fashion, the U.S. government is once again employing the manufactured specter of Iran to justify its crimes in the Middle East.

Outrageously, the U.S. Department of Defense claimed the attack as an act of “self-defense” yet there are no American casualties. Whereas for Syria and Iraq: one Syrian child was killed, three other civilians were injured, and several homes destroyed. Additionally, four Iraqi troops were killed on Iraqi territories. In fact, the U.S. is targeting groups in Syria and Iraq and their allies that played a critical role in defeating ISIS in the region.

Not only are U.S. strikes not defensive by any measure, but the U.S. is also in violation of its own domestic law. Congress, as pro-war as it is, did not authorize these bombings. A majority of the Democratic Party supports Biden’s strikes, even as some call attention to his lack of Congressional oversight, a clear violation of the Constitution. Even though the 2002 Authorization for the Use of Military Force (AUMF), which authorized the Iraq War, was just repealed, the U.S. government’s lawlessness and wanton violence “in defense of its interests” trump any law.

The U.S. has no legitimate interests in Iraq, Syria, or the broader Middle East or Western Asia. The U.S. occupation is not only illegal, but widely unpopular and this is only increasing with every war crime. In January 2020, the Iraqi Parliament voted for the U.S. to leave the country after the assassination of a top Iranian military leader and a top Iraqi military leader in a drone strike on Iraqi soil. In January 2021, the Syrian government issued a statement demanding incoming U.S. president Joe Biden to withdraw U.S. troops and abandon U.S. efforts to plunder the country’s wealth of oil, gas, and agricultural crops.

The timing of the U.S. attacks demonstrates the neo-colonial politics of Washington. These airstrikes took place two days after the Iraqi Popular Mobilization Units—an integral part of the Iraqi armed forces—carried out an official military parade in Baghdad under the supervision and in the attendance of the Iraqi Prime Minister Mustafa al-Kadhimi. Iraq’s Popular Mobilization forces have declared that it will not tolerate the continued U.S. occupation. The Iraqi government is under pressure to defy the U.S. illegal occupation and reclaim its sovereignty. By targeting so-called “Iran-backed militias” the Biden administration is also jeopardizing the ongoing JCPOA—Iran Nuclear Deal—reentry talks.

Let’s be clear: the U.S. government is not the victim; it is an illegal occupying force trampling over the sovereignty and territorial integrity of two formerly colonized countries wrought with war and internal strife due to U.S. invasion and support for neo-colonial proxies. The U.S. antiwar movement must continue to demand: U.S. Out of Iraq! U.S. Out of Syria! U.S. Out of the Middle East!