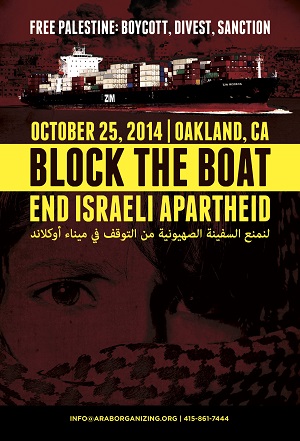 Take the wind out of Zim's sails!
Zionism isn't welcome on our coast!

Port of Oakland
Saturday, October 25, 5am

Carpools from SF to West Oakland BART
Meet at ANSWER Coalition Office, 2969 Mission St., SF
Carpools leave at 4:15am, Doors open at 3:30am
Coffee and doughnuts will be available
Call or email to reserve your spot, 415-821-6545 or [email protected].

END THE SIEGE ON GAZA!
END THE COLONIAL OCCUPATION OF PALESTINE!
RIGHT OF RETURN FOR ALL PALESTINIAN REFUGEES!
FREE ALL POLITICAL PRISONERS!
BOYCOTT, DIVEST, SANCTION!

This summer, we made history at the Port of Oakland when we stopped the Israeli-owned shipping company Zim from unloading its goods for four straight days. The blockade was a catalyst for cities all over the U.S. and across the globe in the ever growing BDS movement to resist Zionism and end Israeli apartheid.

The military assault on Gaza which killed more than 2,200 Palestinians and left more than 100,000 homeless has halted, thanks to the Palestinian resistance, but our struggle is not over. With the full support of the U.S. government, Israel continues to carry out its brutal occupation, confiscate more land and build more settlements, imprison thousands of Palestinians, and maintain the siege on Gaza as part of its policy of ethnic cleansing.

The apartheid state of Israel not only impacts Palestinians, but also plays a role in the oppression of communities all across the globe. The Zim shipping line is instrumental in upholding this system of global repression. There are direct ties to training, weapons, and surveillance between Israel's occupation of Palestine and the increasingly militarized occupation of Black and Brown communities in the United States. And it is now a well-known fact that police departments in and around Ferguson, Missouri, have received training from Israel.

Why Block Zim at the Ports?

Zim shipping line transported weapons and European settlers from as far back as 1948, playing a central role in the creation of the state of Israel and ethnic cleansing of Palestine. Now it's responsible for shipping Israeli ammunition used on poor, black and brown communities all across the US. One third owned by the Israeli government, Zim fuels a significant portion of Israel's economy. Challenging Zim cuts a lifeline of Israeli colonialism and exposes the strength of US-Israeli ties.

Ports have historically been places for workers to assert their power and make social change. During apartheid in South Africa, ILWU workers refused to unload South African cargo in San Francisco in 1984. This action was a major catalyst for international anti-apartheid solidarity that helped topple the apartheid regime of South Africa.

We built on that legacy at the Port of Oakland in 2010, after a Turkish flotilla, the Mavi Marmara, was attacked by Israel for attempting to bring humanitarian aid to Gaza, by successfully blocking a Zim ship from being unloaded the first time in US history an Israeli ship was blocked. And recently, we made history again with the 2014 Block the Boat campaign, stopping Zim and Zionism and the port of Oakland for four consecutive days. Just as apartheid fell in South Africa, so too it will fall in Israel!

Israel was defeated by the resistance and resilience of the people of Gaza. We are inspired as they rebuild and continue to affirm life in the aftermath of Israel's latest bombardment. Palestinian resistance did not begin with Israel's latest bombardment. It has been going on since 1948, since Israel came into existence. And it will not cease until Israeli apartheid falls. It is now more important than ever to continue to weaken the racist state of Israel and bring down apartheid.

Palestinians are unified in their call to people around the world to take action against Israel everywhere. Bay Area residents have the opportunity to up the ante and be leaders in the movement for justice in Palestine!

We salute the longshoreman who stood with the Palestinian people by honoring our Block the Boat picket and refusing to unload Zim in August, and for doing so again during another successful picket in September. We will be asking workers to once again join with us in sending a message to the world that Zionism is not welcome at the Port of Oakland. Join us!

Join the Movement for Boycott, Divestment and Sanctions!

We encourage allies in cities across the US to join us in building on our historic victory against Zionism by ensuring that Zim ships are not welcome anywhere!

Email [email protected] with information about other local block the boat actions.