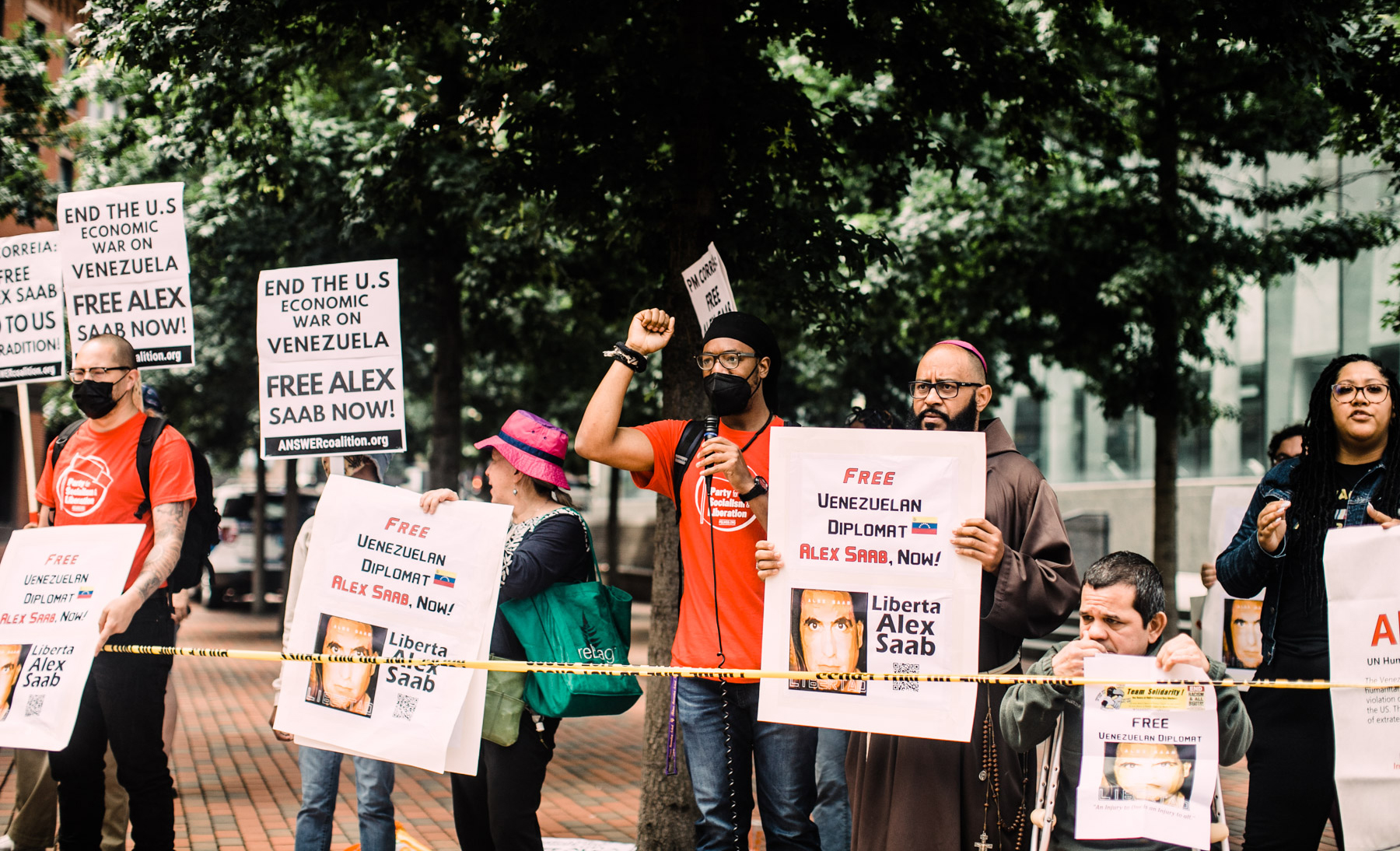 The unprecedented extortion that Washington is employing to block Venezuela’s food and medicine supplies is evidenced in the U.S. government’s persecution of Venezuelan diplomat Alex Saab.

Saab, a Venezuelan diplomat and businessman who was flying to Iran to arrange for food and medical shipments to Venezuela — necessary to overcome the U.S. blockade of Venezuela — was suddenly arrested on June 12, 2020 as his plane made a technical stop in Cabo Verde in West Africa. His illegal arrest in violation of his diplomatic immunity was by U.S. government claims of “corruption” and “money laundering.”

He has since been illegally detained in Cabo Verde. Despite the UN Human Rights Committee’s demand that he be released, it is apparent that the Cabo Verde government is following Washington’s dictates.

July 5th is the Independence Day of both Cabo Verde and Venezuela. Prime Minister Ulisses Correia e Silva thought he would be welcomed in Boston and Brockton without a disturbance. But activists greeted him at Boston City Hall and Santana Restaurant in Brockton with chants and placards, demanding that he not hand over Alex Saab by illegal extradition to the United States.

Dozens of community members and activists from the ANSWER coalition, the Círculo Bolivariano, Party for Socialism and Liberation, The Boston School Bus Drivers USW local 875, and the International Action Center attended the events and protested his arrival. Slogans said “End the U.S. economic war on Venezuela Free Alex Saab,” “PM Correia Don’t Extradite Alex Saab,” “Venezuela has a right to feed the people.”

Who is Alex Saab?

Alex Nain Saab Morán is a Colombian-born businessman who is now a Venezuelan citizen. He was en route to Iran in early 2020 to secure food, essential supplies and medicine deals for Venezuelan public programs such as the highly-effective CLAP food program, (Local Committees for Supply and Production). The CLAP program provides regular sustenance to more than 6 million Venezuelan families, who receive the government boxes in their homes by neighborhood organizations.

In June 2020, Saab was arrested and imprisoned in Cape Verde at the request of the U.S. government under Donald Trump. On March 18, 2021, The Cape Verde Supreme Court approved the extradition of Alex Saab to the United States. 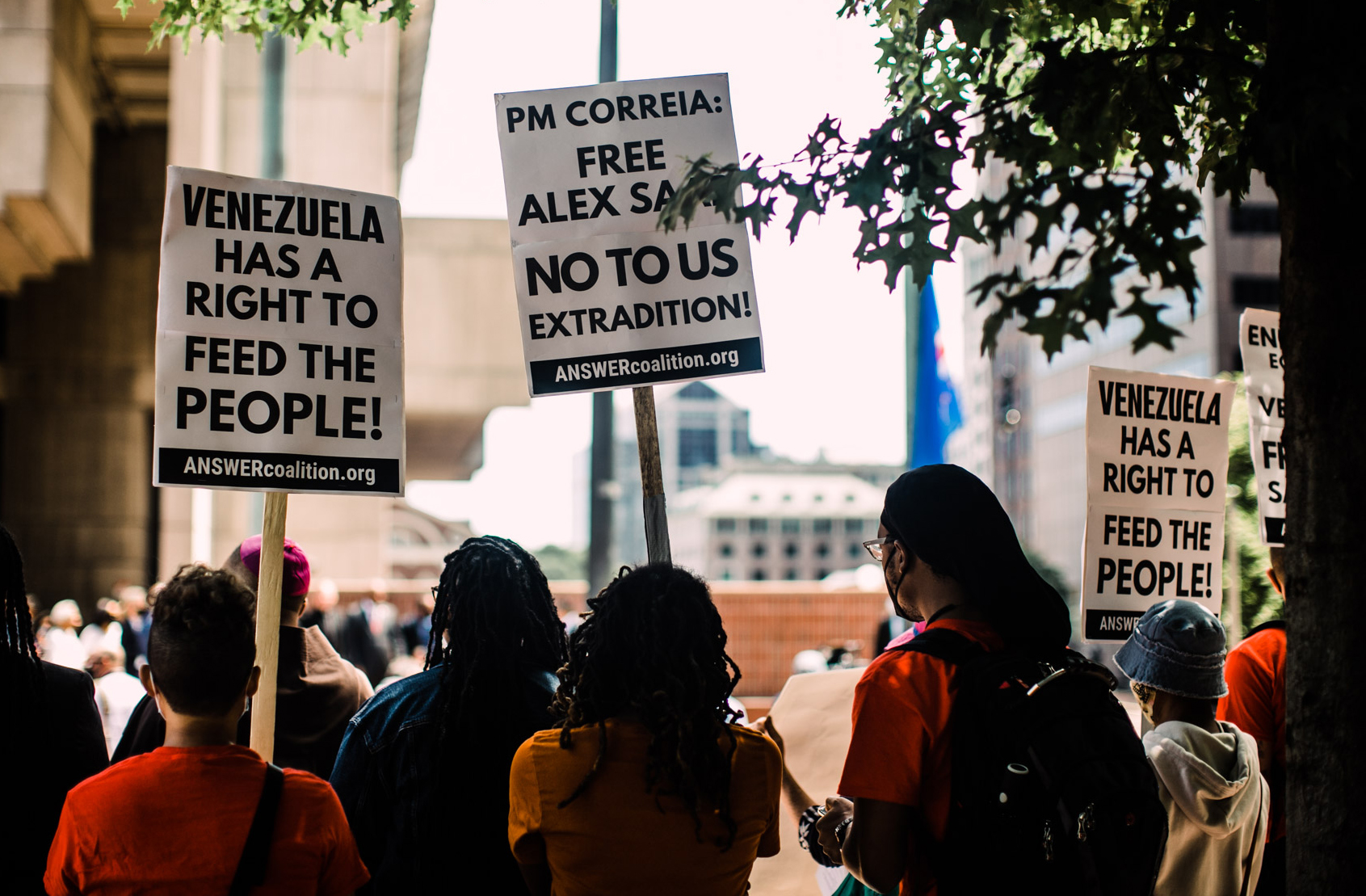 Despite having no extradition treaty with Cape Verde, the U.S. has criminally imposed their own interests on Cape Verde and continue to pummel the Venezuelan people with crippling sanctions.

The fight against Unilateral Coercive Measures

In 2019 at the United Nations General Assembly, Venezuelan vice president Delcy Rodiguez said that from 2015 to 2018 the Venezuelan economy lost 130 billion dollars due to the brutal financial blockade imposed by the United States government [cite].

Sanctions are designed to asphyxiate the economy and create chaos in the lives of all Venezuelans; all being done under the name of “democracy” and “humanitarian crisis.” But in reality it is a crisis inflicted by the U.S. As a result, Venezuela is facing severe hunger, extreme shortage of medicine and basic supplies.

In May 2020, the U.S. District Court Judge Leonard P. Stark auctioned off all assets of Venezuela’s CITGO Petroleum without hearing Venezuela’s appeal. President Nicolás Maduro announced that in 2019 the production of petroleum fell to 66.5%, a third of what was produced in 2014 [cite].

In 2017, Venezuela was exporting about 2 million barrels of oil a day, due to the current oil embargo, they are now producing 200,000 barrels per day, this is only 10% of what they used to export in 2017. U.S. oil sanctions have resulted in fuel shortages across Latin America. Last year, Iran sent shipments to help in restarting refineries in Venezuela but the United States seized them.

The case of Alex Saab sheds light on the power of the U.S. government in not only extraditing one innocent individual but the power of Washington to charge and extradite anyone looking to support any country under U.S sanctions. Currently there are 29 different countries under U.S. sanctions, 15 of which are African countries.

The fear tactic being pushed by Washington is that no one should try to help Venezuela or else it could lead to severe repercussions. This troubling move by the U.S. will not go unchallenged.

In an exclusive interview with RT journalist Nathalí Gómez, she asked Saab why has he been subjected to the psychological and physical torture and interrogation while detained in Cabo Verde?

Saab responded, “"Presumably, it is an attempt to break my determination and turn me against Maduro and his government. I will never do that because neither I nor Venezuela have done anything wrong. Venezuela has the right to manage the welfare of its people and no political appointment through self-serving 'sanctions' or intimidation will force us to deviate from this path.”

In a sign of growing U.S. geopolitical interests in the region, U.S. ambassador Jeff Daigle announced on July 4 the construction of a larger $400 million U.S. embassy in Cabo Verde with the aim of expanding “our bilateral relations.”