Boston rallies to say NO to anti-immigrant "Secure Communities" 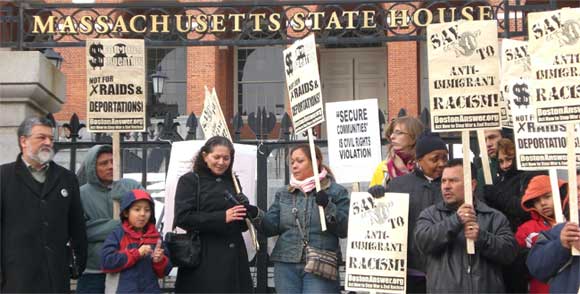 Demonstrators gathered in front of the Massachusetts State House on Saturday, Feb. 12, to protest the anti-immigrant “Secure Communities” program. Gov. Patrick announced in December his intention to sign on to the federal program that mandates local law enforcement to cross check the fingerprints of those arrested against the Homeland Security’s database in search of immigration status.

Students, workers and immigrant rights advocates held signs calling “S-Comm” a " and people of color. While proponents of the program use words like “public safety” and “security”, in reality the so-called “Secure Communities” program is an assault on the civil liberties of all people and a yet another weapon in the government’s arsenal for the persecution of immigrant workers.

Through this program, thousands have been detained and deported, ripped from their families and friends, for committing no crime at all. In Suffolk County, 68 percent of those detained and deported have been unlawfully arrested, arrested for minor offenses like traffic violations or ultimately have their charges dropped. This is the sixth highest percentage in the country.

Saturday’s action at the State House was initiated by the Boston May Day Committee, of which the ANSWER Coalition is an active member, with dozens of endorsing organizations and individuals. The rally was chaired by Sergio Reyes of the Boston May Day Committee and speakers included: Bishop Felipe Teixeira with the Immigration Pastoral Center in Brockton, Mass.; Mary Mendonça, National Lawyers Guild; Alexandra Pinero Shields, Jobs with Justice; and Isabel Lopez, MassCOSH, who was accompanied at the mic by a group of immigrant workers.

Dorotea Manuela of the Boston May Day Committee drew the connection between anti-immigrant programs like “Secure Communities” with racial profiling and police brutality that have historically been used to oppress Black communities. This connection was echoed by many other speakers.

Addressing the root cause of immigration, Jennifer Zaldana of the ANSWER Coalition said, “The United States for decades has been waging war on our homelands, forcing millions to emigrate to the U.S. in search of better lives ... yet [we] are treated as criminals!”

At the rally, protesters signed a “While you were out” message that will be delivered to Governor Patrick in the coming days. Organizers pledged for future actions against “Secure Communities” and an end to the criminalization of immigrant workers. ANSWER Boston stands with all workers in this struggle for equality and against racism.