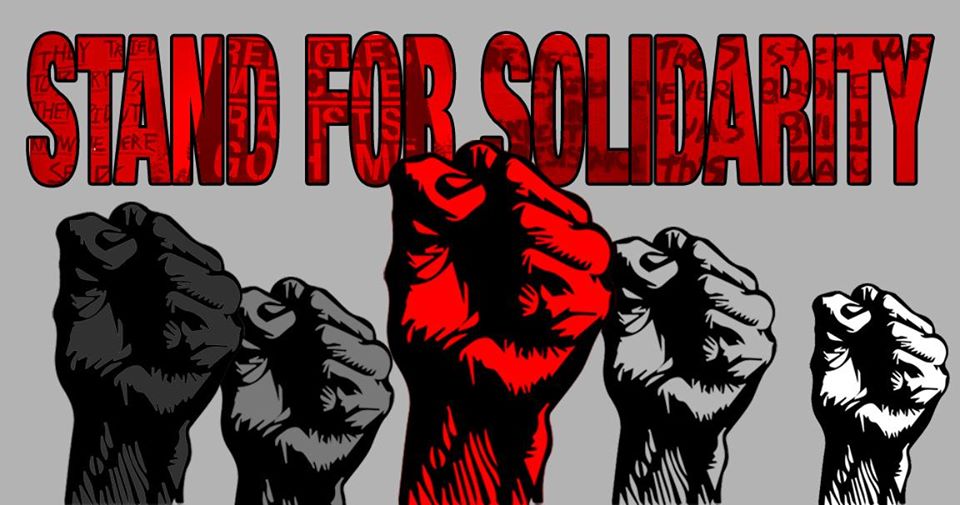 ***WHAT***
Stand for Solidarity is a counter demonstrative rally in response to the August 19th “Free Speech Rally” called by a coalition of white nationalist organizations. Our coalition believes that it is crucial to not only vocally oppose these grass-roots led, far-right mobilizations, but that local communities must unite to resist the ways that white supremacist ideologies are validated, re-enforced and perpetuated by legislation and policy on a state and local level. We have assembled a list of actionable demands and have invited a series of speakers from organizations involved in the local struggle against white supremacy to speak about how individuals can get involved in these initiatives happening in their communities. This coalition does not advocate for the use of violence as an
offensive tactic during this demonstration. We respect the bodily autonomy of individuals to defend themselves if physically attacked.

***WHY***
This coalition has called this action as an imperative gesture that our community will not tolerate the growing emboldenment of the White Nationalist far right and the ideologies they support. We have also called this demonstration as an indictment of state sanctioned racism and white supremacy as laid out in our demands

Please message the event hosts if your group or organization would like to endorse this action.

***STATEMENT OF PURPOSE***
“On August 12th news broke that a white supremacist rally held in Charlottesville, Virginia. As Confederate monuments begin to topple and get slated to be taken down, far right-wing groups and tendencies have surfaced to oppose this. They want to maintain the legacy of slavery and defend white supremacy.
We salute the thousands who are in the streets who have put their bodies on the line to say “No pasarán” — they shall not pass. The fascist rally, numbering around 500, was broken up by thousands of counter-protesters and prevented from marching on several occasions. The fascists then resorted to using their cars. They rammed into protesters who gathered to stop the white supremacists from marching to a majority-Black housing project.
White supremacists represent nothing but terror and violence in the United States. They are not a mere political or ideological current. Their growth poses a mortal threat to Black, Latino, Native, Arab, Asian, Jewish, Muslim and immigrant communities, to women and LGBTQ people, and to the organizations of the working class. Therefore, any action to preemptively stop their advance is self-defense on behalf of millions of people nationwide.
It is a dangerous escalation that the fascists would feel the confidence to march with torches and weapons, and without hoods, through a city where they know the vast majority of residents oppose them. Electrified by the Trump campaign and presidency, they are now starting to form more disciplined and armed units. They must be fought every step of the way, through mass mobilization and direct action, and sent back to the shadows from which they came.
The fascist conference and rally was billed as one to “Unite the Right.” While they have considerable ideological and tactical differences, they are coming together in the streets to oppose those who they see as their common enemy. Those on the Left, progressives, anti-racists, and anti-fascists must do the same, forging steadfast unity in the streets — as the heroes and martyrs of Charlottesville did today.
We call on all defenders of the rights of the working class and the oppressed - Black, Latinx, LGBTQiA, Muslim, Indigenous, and more - to confront racism and fascism. We cannot rely on the politicians or the state, they have not only refused to wipe out white supremacy but they actively collude in fostering it through their bigoted policies.”

***DEMANDS***
1.)Remove all the memorabilia of racism and white supremacy in Virginia & Boston!

2.)Drop ALL charges on anti-racist/anti-fascist protestors and pay for their medical fees in VA!

6.)Free, Drinkable, & Clean Water for All the Prisoners at Norfolk!

8.)No War on North Korea! No War on Venezuela! End the Sanctions