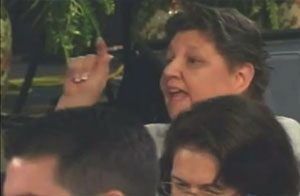 A statement from the Seize BP Campaign.

BP is lying. The federal government is lying. Kenneth Feinberg is ... well, let's call it flip-flopping.

Out-of-work fishers and others from the Gulf Coast are enraged about the double dealing of BP and the Feinberg-led escrow fund. They have just learned that if they earned any income or wages from BP as part of the clean-up effort, the money would be subtracted from any claim they make against the so-called $20 billion escrow fund. That is a direct contradiction from what they had been told earlier.

But the latest lie turns out be the tip of the iceberg.

The Obama administration has done an about face on the function of the BP/Obama escrow account plan.

When Obama announced the escrow account in order to vent the rising tide of political anger that was increasingly directed at his disengaged response to the suffering in the Gulf, he promised and assured the people of the Gulf that “Dissatisfied claimants maintain all current rights under law …” (See White House Fact Sheet: Claims and Escrow, June 16, Office of the Press Secretary)

Now, Feinberg, the Obama/BP escrow administrator, has announced that in order to receive lump sum payments, claimants will have to execute a waiver of their rights to sue for full or additional relief in the courts. (New York Times, July 16)

The choice is: Take what is offered, even if it is a portion of what you are entitled to, or else risk ending up like the victims of the Exxon Valdez disaster, fighting it out in court for decades to receive a pittance.

Responding to criticism, Feinberg has stressed that people have a choice. But this leaves people with a choice driven by desperation, fear and uncertainty.

This is exactly what BP wants. Is this any different than if individuals were forced to negotiate alone against BP’s army of lawyer-sharks? Here, Obama and Feinberg are doing BP’s bidding for it.

Is Feinberg BP’s lawyer? Technically, he is a “claims administrator.” But he refuses even to disclose how much his firm is getting paid from BP.

The choice the Obama/BP escrow account foists upon people is the same that you would expect from a BP lawyer.

Faced with the need to put food on the table, to pay this month’s rent or mortgage, or the note on a fishing trawler or meet other critical needs, many will feel that they have no choice at all but to take whatever the Obama/BP account offers even if it is far less than what is fair.

Yet, the fact is: The impact of the damage will not be fully known for years.

Obama is doing just what BP wants: Force a decision now, in a crisis of desperation and economic pressure, and take away or “waive” thousands of people’s rights.

Collecting compensation was promised to not come with legal strings attached. The escrow account is looking more to be a vehicle to limit BP’s liability than to distribute compensation.

What would a fair escrow account do? Compensate in full. No waivers of rights.

BP and Feinberg are employing a smoke and mirrors propaganda ploy designed to hide their true intention to shield BP. They argue that people shouldn’t be allowed to be “paid twice” – once from the escrow fund and then later from a lawsuit. That is utter nonsense.  The fact is: A person cannot recover from a court lawsuit any additional compensatory damages if the escrow account has already paid full compensation.

The protection BP has against lawsuits is for the escrow account to pay claims in full. Instead they – and Feinberg on behalf of President Obama—want a system for partial compensation that denies desperate people on the Gulf Coast the ability to litigate against BP for full recovery and compensation for losses incurred beyond the next few months.

The Seize BP! movement has to hold BP, the federal government and Feinberg’s feet to the fire or the working people of the Gulf Coast will be swindled at the very moment that BP’s big shot investors begin to rake in record profits once again.

Take action now! Send a letter to editor to condemn the continued collusion between the federal government and BP.