Supporters of imprisoned soldier rally at Quantico Marine Base 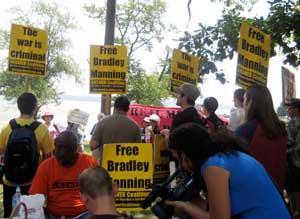 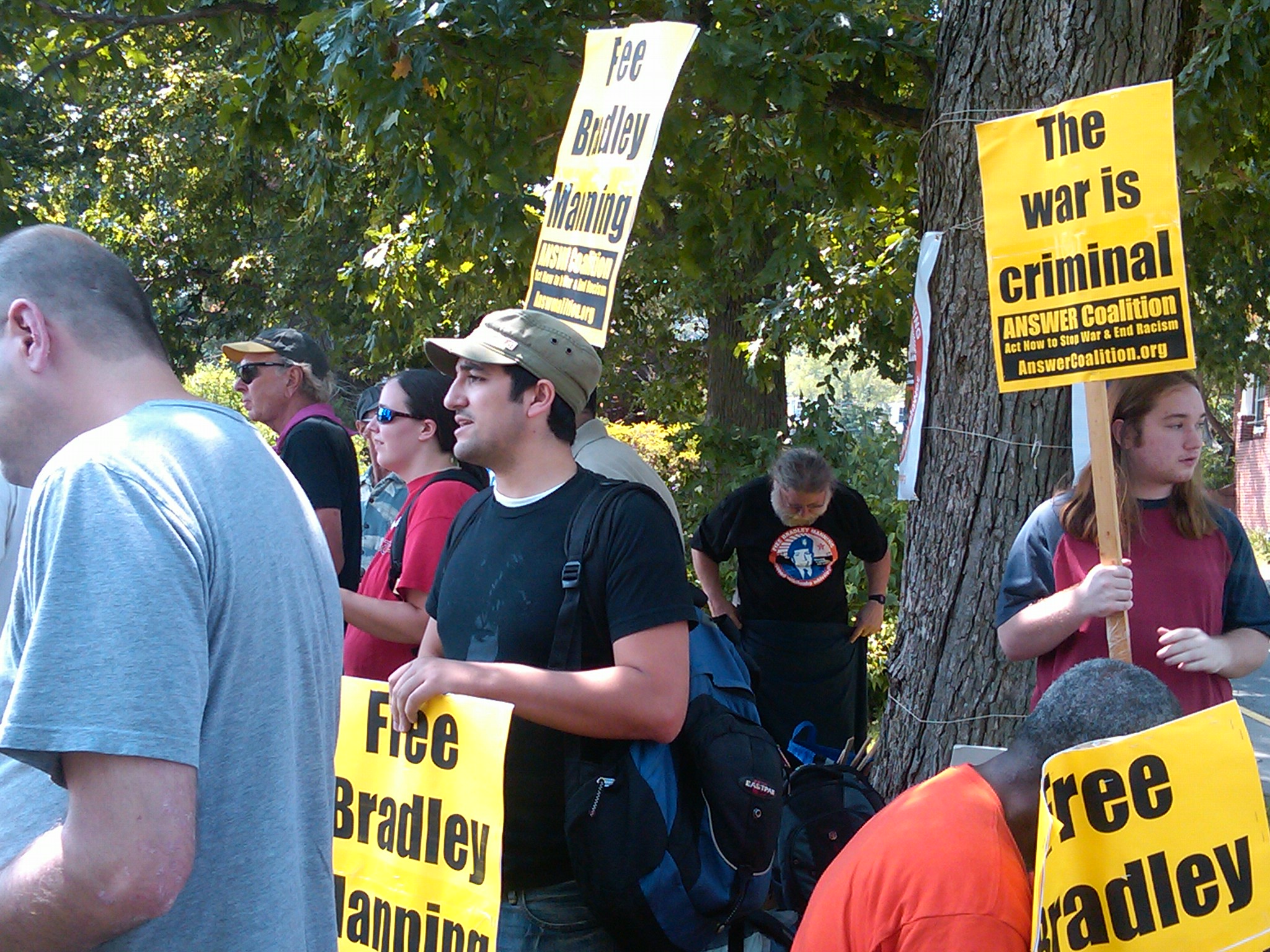 The demonstration was called by numerous organizations, including the ANSWER Coalition, Code Pink, Courage to Resist, March Forward!, IVAW-DC, Veterans for Peace, and others.

The demonstration received widespread media attention, including CNN and other television networks. Today's New York Times has a prominent front page story about Manning that continues on page 3, where two photos of the demonstration are prominently featured.

In his speech at the rally, Andrew Castro of the ANSWER Coalition said:

“We stand here today in defense of all those who dare to tell or reveal the truth about a criminal war. During the Vietnam War, the government wanted to send Daniel Ellsberg to jail for releasing the Pentagon Papers, which proved that the government had lied to the people about the war. But the American people realized that Ellsberg was right and the war was wrong, and the protests against the war intensified.

“Forty years after the release of the Pentagon Papers, the government is now trying to criminalize, intimidate and repress those who tell the truth about U.S. war crimes in Afghanistan and Iraq. The White House and the Pentagon brass want to send a threatening message to all rank-and-file soldiers who are witnessing or learning of atrocities, and who want to expose both these crimes and the government’s lies about the war. All of us are here today to demand freedom for Bradley Manning.”

As the rally closed, the crowed marched down Potomac Avenue in the heart of Quantico Marine Base, chanting "Free Bradley Manning!"

Bradley Manning is a 22-year-old soldier who was stationed in Iraq. He was arrested and has been held incommunicado for months. He is charged with releasing a graphic video of an attack in April 2007 by a U.S. Apache helicopter that killed a group of journalists and civilians. The Pentagon had refused to release the video of the attack, which had been requested in a Freedom of Information Act request by Reuters news service. Two Reuters employees were killed, numerous civilians were massacred and two children were severely wounded in the attack. The video became a major scandal when it was released by WikiLeaks. Manning is now imprisoned at the Marine Base in Quantico, Va.

News reports suggest that Bradley Manning may be charged with the release of the 75,000 documents that WikiLeaks posted on its website recently. Those documents paint a grim picture of the repeated killing of Afghan civilians in a deteriorating military occupation by U.S. and other foreign forces.

We want to thank those of you who have continually supported the work of the anti-war movement through your generous donations. If you haven't made a donation, please do so now. We can't do it without everyone's help. If you have donated but can donate again, please make another urgently needed contribution.