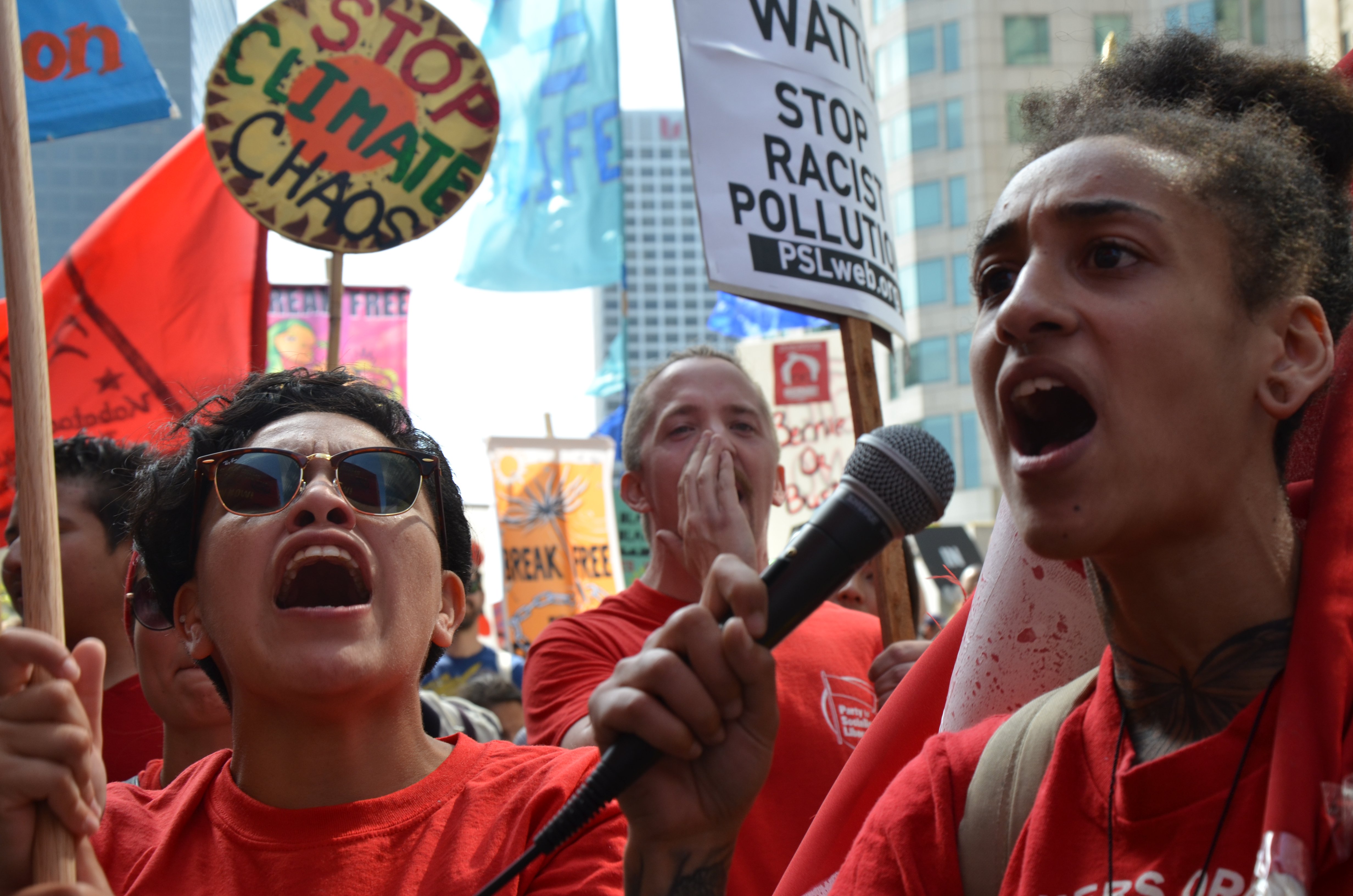 During the largest wave of coordinated climate protests in world history, over 1,500 people from the Los Angeles, Bay Area, Kern County, San Diego and Sacramento communities united and marched to put an end to all neighborhood drilling, stop environmental racism, and hold SoCalGas accountable for their devastating methane leak. These demands fell under the broad demand of the worldwide wave of action to keep all oil, gas, and coal in the ground.

Taking aim at neighborhood drilling struck at the heart of environmental injustice in Los Angeles, where old, decaying oil infrastructure and massive refineries have threatened people’s lives for decades, especially people of color, who represent 75 percent of the residents living within legally unsafe distances of oil production. The specific demand of a 1,500 ft setback from residential or community spaces would eliminate roughly 70 percent of all oil production in the city.

The opening rally brought speakers from across the state of California who spoke on the various problems they are facing in their communities from oil
refinery explosions to fracking to “bomb” trains and much more. Bill McKibben, founder of 350.org and leading environmentalist and climate journalist also spoke at the Los Angeles rally about the urgency of ending the production of carbon for energy.

Protesters marched past nearby local government buildings to highlight the role the government plays at all levels in assisting major polluters just six months after a damning regulatory report underscored the fact that many drilling sites and wells in Los Angeles residential communities have not been inspected for groundwater contamination in decades. The report also noted that Gov. Jerry Brown, after firing two top regulators in 2012 for not handing out fracking permits fast enough, has given the green light to oil industry to “drill at will” in the Los Angeles area and beyond.

As the march turned sharply through the banking district protesters chanted loudly in unison with the PSL contingent – “The planet! The planet! The planet’s on fire! We don’t need no oil let the corporations burn!” and “From Wilmington to Watts – racist pollutions got to stop!”

Anti-capitalist sentiment carried the day as protesters brought signs pointing out that it’s the billionaire class, the super-rich, who are the only ones that stand to profit from continued climate devastation and environmental racism.

The protest ended outside the SoCalGas corporate office to raise the demand that the entire decaying Aliso Canyon facility be shut down permanently to prevent another record breaking methane leak. To this day up to 15,000 residents of the Valley community remain displaced by the poisonous, cancerous gas that has enveloped their neighborhoods and somehow the company is rushing to reopen the facility by the end of summer. One day after the march, members of various groups around the state staged a sit-in on the SoCalGas facility to shut it down, blocking any traffic flow in or out of the space.

The global wave of action included participation from more than 30,000 people on six different continents. For many involved it represented an escalation to new civil disobedience tactics to shut down the oil industry and force a transition to renewable sources of energy – an urgent need for human life to continue on this planet. The PSL stands in complete solidarity with all forces fighting to save our environment and commit ourselves to that struggle. With our powers combined we can put a stop to climate change.