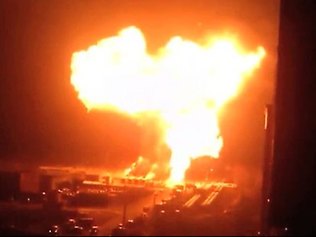 A Syrian air defense base has reportedly been destroyed in a series of blasts.

Bitterly frustrated that the Obama administration was forced to pull back from its planned aerial war against Syria, the Israeli government has just launched its own bombing of Syria.

The Israeli Air Force struck the Syrian city of Latakia in this latest major bombing.

Funded by the United States to the tune of nearly $4 billion each year, Israel also bombed Damascus in May 2013 as the Syrian armed opposition was suffering reverses on the battlefield in its foreign-backed effort to topple the Syrian government. That attack created a massive fireball in Damascus. Israel also carried a major bombing of Syria in 2007.

Israel seized Syria’s Golan Heights in its surprise invasion in 1967 and continues to occupy the territory in defiance of United Nations resolutions demanding that it be returned to Syria.

Israel has been in the forefront, along with United States and NATO countries, supporting those groups carrying out an armed struggle to overthrow Syria’s independent and nationalist government.

Syria’s purported but unproved use of chemical weapons was used as the pretext for a planned U.S. military campaign in August and September. Mass opposition by people in the United States and around the world prevented the attack.

Israel has its own large chemical weapons stockpile along with an offensive biological weapons program. Israel also possesses hundreds of nuclear bombs and refuses to join the Nuclear Nonproliferation Treaty.

Ironically, the newest Israeli bombing of Syria coincides with the announcement by the United Nations chemical weapons inspection team that Syria’s Assad government has fully complied, and ahead of schedule, with its agreement to have its chemical weapons placed under international supervision so that they could be fully destroyed.

Neither the Obama administration nor any other U.S. administration has called on Israel to destroy its weapons of mass destruction. In fact, Israel continues to be the largest recipient of U.S. foreign assistance. Both the Democrats and Republicans and the Pentagon and CIA view Israel as an extension U.S. power in this resource-rich region that possesses two-thirds of the world’s known oil reserves.

A growing number of people in this country are organizing to cut all U.S. aid to Israel.