BREAKING NEWS: British Parliament Votes “NO” on war against Syria 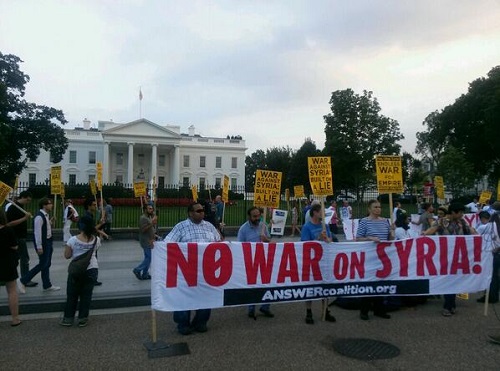 Aug. 29 protest at the White House initiated by the ANSWER Coalition

Today (Aug. 29), the British House of Commons voted to reject Prime Minister David Cameron's plan to join with the Obama administration in launching missile strikes against Syria. Cameron is the closest partner that President Obama has. This was an enormous setback for the war makers.

Yet, Obama's top aides told the New York Times immediately after the House of Commons vote that the president was preparing to attack Syria even if the British government did not join the operation.

Such an attack would be nothing other than a new lawless and reckless act of aggression by the world’s greatest military superpower. The consequences of such an assault are unknowable in advance. In addition to further exacerbating the suffering of the Syrian people, the potential for a wider war is very real. Russia has announced it is moving warships to the eastern Mediterranean; Iran has stated that if Syria is attacked by the United States, Israel will be hit also.

But until the missiles are fired and the bombs dropped, it is still possible to stop the war before it starts. It is critically important that all those who oppose a new war and who demonstrated today stay in the streets over this crucial weekend. What people do can make a difference!

Many demonstrations are already being planned for this Saturday, August 31 in Washington, D.C., San Francisco, Los Angeles, Chicago, Boston, Albuquerque, New Orleans and many other cities.

Click here to find a listing of demonstrations nationwide.

Please let us know the details of actions that are being planned in your area over the next few days. Click here to fill out the Event Listing form.

Hands Off Syria – No New U.S. War in the Middle East!