Guest Statement - BREAKING: Soleimani was in Iraq to ease regional tensions; then Trump said ‘Kill him’

This article was originally published on LiberationNews.org
Author: Ben Becker

BREAKING: Soleimani was in Iraq to ease regional tensions; then Trump said 'Kill him'

The acting Iraqi Prime Minister Adil Abdul-Mahdi addressed Parliament today with a recommendation for U.S. troops to be removed from the country. That speech has been widely covered and quoted in the U.S. media but its most explosive revelations have been omitted or buried.

In the address, Abdul-Mahdi revealed that Soleimani had traveled to Baghdad to deliver a message back from Iran to Saudi Arabia about a proposal to lower tensions in the region, that Soleimani was to meet with the Prime Minister the very morning he was assassinated, and — most crucially — that days prior Trump had asked the Iraqi Prime Minister to "play the mediator's role" between the U.S. and Iran.

Oddly, this information is not yet a major headline in any mainstream publication and those that have mentioned it in passing do not explain its full implications.

This revelation blows apart the Pentagon and White House's claim that they took "decisive defensive action" to preempt an attack orchestrated by Soleimani. There can be no doubt that the Trump administration would have known in detail about Iran's ongoing secret negotiations with Saudi Arabia, one of its closest allies, which were mediated by an Iraqi government, which was also operating closely and communicating frequently with Washington.

This means the Pentagon and the White House fully knew, when they ordered the airstrike to kill him, that Soleimani was traveling to Baghdad in a diplomatic capacity as an emissary of Iran, and that he had a meeting planned with the Prime Minister to discuss broader de-escalation. 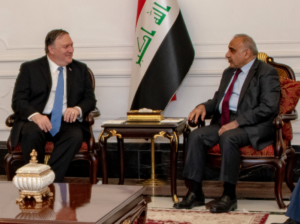 The source of this revelation — Prime Minister Abdul-Mahdi — was until very recently seen as a close ally, if not proxy, of Washington. Abdul-Mahdi says just a few days before the assassination Trump had personally called him to thank him for helping to end the siege of the U.S. Embassy in Baghdad. Abdul-Mahdi had denounced that protest encampment, called for it to end and threatened to resign to convince the PMU militias to back off.

But the airstrikes against Soleimani and Iraqi Popular Mobilization Units leader Abu Mahdi Al-Mohandes changed the U.S.-Iraqi dynamic instantly. The Prime Minister called the airstrike against his guest a "political assassination" that Iraq could not accept as an extreme violation of national sovereignty. In an official statement, he explained that "the two martyrs were huge symbols of the victory" over ISIS — a sentiment shared by a wide range of Iraqi politicians and religious figures, including many who had previously collaborated with U.S. occupation forces.

Until we receive further elaboration, the Prime Minister's revelation to Parliament leaves in question whether the Trump White House actually helped schedule the meeting between Soleimani and Abdul-Mahdi under a pretense of peace talks and then executed Soleimani when he arrived for it — a mafia-style setup and assassination. Was the Saudi monarchy in on the plot, despite its claims that it did not know of the airstrike beforehand, or was Washington trying to sabotage a Saudi-Iranian peace initiative?

One anonymous Pentagon source told the New York Times that the assassination had little forethought, and the decision left the military "stunned". The source claims that the Pentagon considered the drone strike assassination of a leading Iranian official so extreme when they presented it to Trump that they assumed he would not go for it. These reports assert Trump ordered the hit after just 15 minutes of deliberation and suggest he was still fuming about the images of the U.S. Embassy under siege from Iraqis. Whether this is true — or a piece of leaked misinformation from elements within the Pentagon now trying to walk back from total war — is anybody's guess.

In any case, the White House's official Soleimani assassination story is quickly unraveling, even faster than the "weapons of mass destruction" lie in 2003 and the fabrications that led to the Libya bombing in 2011.

Analysts the world over believe that an all-out U.S. war with Iran, a country with formidable defenses and 90 million people — larger than France and Germany — would result in incalculable death and destruction, and have enormous regional and global consequences.

A statement released today by the ANSWER Coalition, which helped initiate the 90-city day of anti-war protest on Saturday, responded to the revelation with renewed calls to action: "As the lies of the Trump administration are further revealed we must continue to demand no war with Iran and that U.S. troops leave the Middle East."