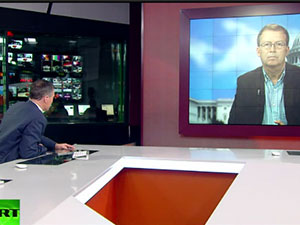 Transcript of RT interview with Brian Becker, National Coordinator of the ANSWER Coalition.

The Obama administration has adopted a policy of provocation and escalation when it comes to North Korea, Brian Becker, the director of the anti-war coalition ANSWER told RT, the ultimate goal of the approach is not war but regime change.

RT: North Korea continues to maintain it's on the brink of war with the South. How close are we now to a nuclear show down?

Brian Becker: There is no place in the world that’s more militarized and more of a tinder box than the Korean Peninsula. The US has 25,000 troops there, the US has brought in the B-52 nuclear capable planes to simulate the bombing of N. Korea. The US, two weeks ago brought the B-2 bomber which can drop 30,000 pound bombs as well as nuclear bombs. It just gave 200 bunker buster bombs to South Korea. It’s changed the military shape of its alliance with S. Korea in a way making it more ominous to N. Korea.

And every time N. Korea does anything to show its determination to defend itself or to make the perception at least that it can defend itself, then the US treats N. Korea as the ultimate provocateurs. So both sides have climbed the escalation ladder in a very tense part of the world and I think we’re at a very dangerous point. Right now anything could trigger some limited military conflict which could quickly escalate.

RT: Who's responsible for the situation ending up where it is now?

BB: I think we can see, and I think the American people don’t know it, because the thorough going propaganda campaign has been quite effective in the United states, but the Obama administration, unlike the Clinton administration in the last months of the second term where it tried to normalize relations with Korea, sent Madeline Albright then Secretary of State there to meet Kim Jung-il. There seemed to be a thaw. The Obama administration has taken the Bush administration policy of provocation, escalation, increased tensions to a whole new level.

And I think the Obama administration has designed a policy that’s intent on carrying out a regime change in N. Korea, and I think this is crazy because the N. Korean government has made it clear that it won’t go the way of East Germany to be incorporated, to be swallowed up by the pro- Western, second part of its country. And now we see a growing confrontation. The Obama administration does not want a war they want to carry out a regime change that is why they had these enhanced economic sanctions.

RT: How do they think it is going to happen without war?

BB: They want to create pressure on China to break China away from its historic relationship with N. Korea. By creating a military confrontation or near-confrontation, the United States is saying to the Chinese, look the stakes are very high, time for you to change, time for you abandon your ally in North Korea. And I think they think that could be the prescription, the precursor to regime change in North Korea, if they could break China away. China does not want to do it, although you can see a debate right now going on within the Chinese establishment.

RT: Should the North Koreans be concerned about a preemptive strike?

RT: Isn't it in America's interests to keep a 'dangerous' North Korea there on the Peninsula to have a reason for re-balancing to the Asia-Pacific region?

BB: Well indeed. Ever since President Obama went to Australia and announced the so-called Asia Pivot, the US is loading up the Pacific with its aircraft, its nuclear-capable aircraft and a large part of its navy. Of course they need provocations, they need tension. It is good for business, it keeps the mega profits coming in into the military industrial complex but it gives the Pentagon the excuse, the pretext to do what it wants to do which is basically to encircle China.