Brooklyn’s immigrants tell Trump: ‘Haitians stand up, never give up!’ 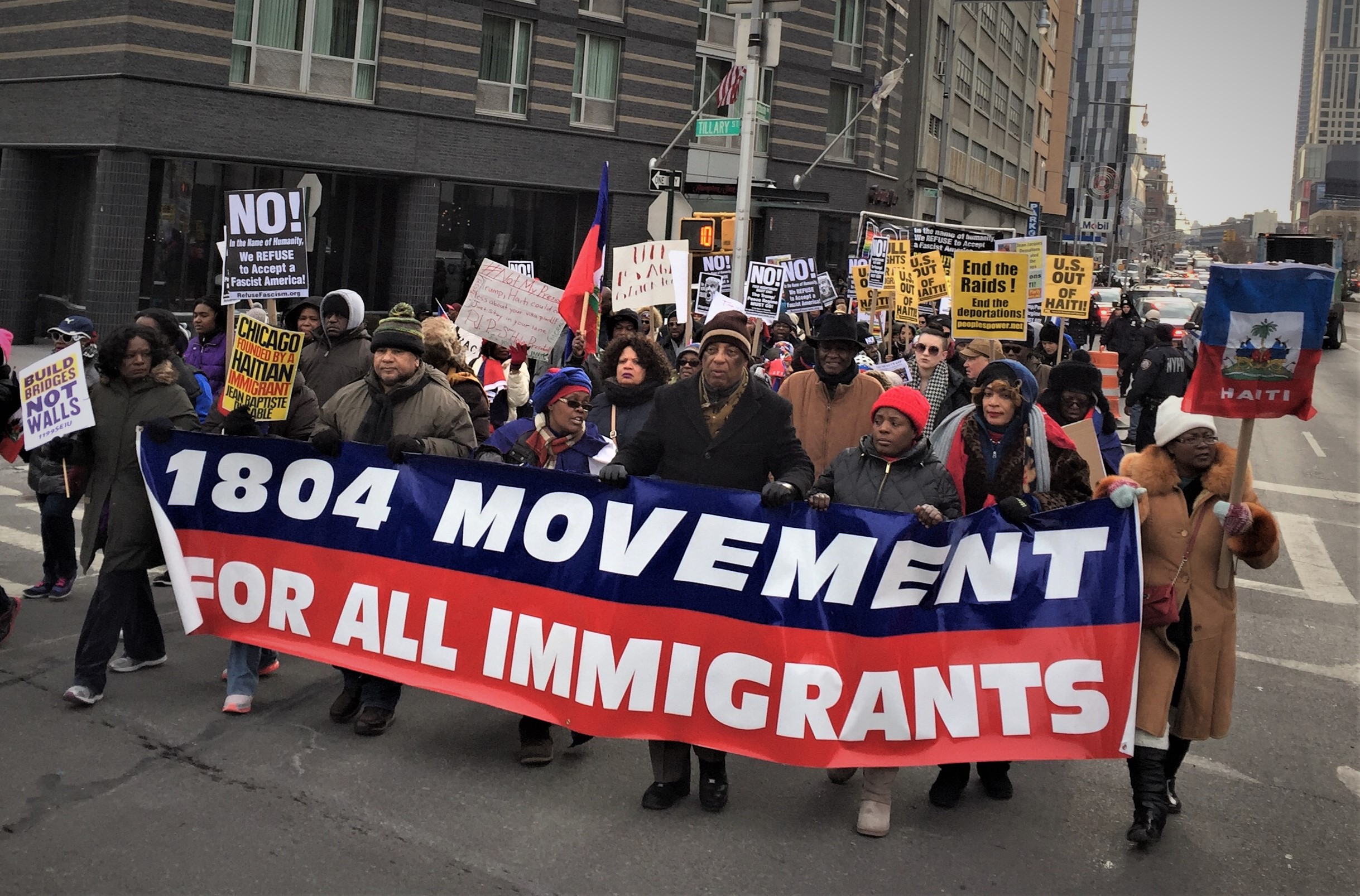 Responding to Donald Trump’s vile racist remarks about “s—hole countries” aimed at Haitian, El Salvadorean and other immigrant groups, over 300 people marched from Brooklyn into Manhattan across the Brooklyn Bridge on Jan. 19. This protest against Trump’s bigotry highlighted the devastation U.S. imperialism has caused in the Caribbean, Central America and beyond. The action was organized by the newly-formed 1804 Movement for All Immigrants. The name references the year that self-freed slaves founded the Republic of Haiti, the first independent nation of Latin America and the first Black republic.

The march began at Grand Army Plaza in Brooklyn, of historical significance for the Haitian community here as the starting point for many other actions against U.S. imperialism and racism. The most famous of these was the 1990 march that literally shook the Brooklyn Bridge after the Center for Disease Control unscientifically labeled the Haitian community a high risk group for HIV and recommended restricting Haitians from donating blood. On that day over 150,000 people mobilized to protest the CDC’s racist policies and demonstrate the power of the Haitian community. That day still lives proudly in the collective memory of Haitians in New York City.

The marchers made their way through Brooklyn chanting and singing, “Africa, Haiti, same struggle, same fight!” and “Haitians stand up, never give up.” From Grand Army Plaza over the Brooklyn Bridge is almost four miles, but the liveliness and militancy of the crowd made that distance seem much shorter. People joined the march in downtown Brooklyn and Lower Manhattan, swelling the crowd. The addition of a seven-piece band with horns and snare drum created even more of a buzz approaching the rally site—the Trump building at 40 Wall Street.

This site was chosen to reflect the many centuries of exploitation of Haiti by the U.S. political and economic establishment. Featured speakers highlighted the role of both the Democratic and Republican parties in this exploitation, and spoke out against this global imperialist agenda most recently exemplified by Donald Trump. Speakers from the 1804 Movement highlighted the systematic targeting of Haitian community by the U.S. political establishment, from the Obama-era deportations to Trump’s rescinding of the Temporary Protected Status and denial of visas for Haitian people.

Berthony Dupont from Haiti Liberté, a founder of the 1804 Movement, described their intention: “The 1804 Movement is a movement against racism and U.S. imperialism. The United States wants to divide the workers with racism. Immigrants are workers. They come here from Haiti, Asia and Africa because their countries are destroyed by U.S. imperialism.”

1) President Donald Trump’s public apology to all Haitians, Africans, and African-Americans for his racist remarks.

2) Permanent U.S. residency for all holders of TPS currently in the U.S..

3) Reparations for over a century of U.S. crimes against and exploitation of Haiti’s people and for the UN’s introduction of cholera into Haiti.

4) An end to all forms of racial profiling and police terror in the U.S., above all against Black and Brown people.

5) An end to the UN military occupation of Haiti (today known as MINUJUSTH) and to U.S. meddling in Haiti’s elections.

Standing in the shadows of Wall Street investment banks, the speakers pointed to the capitalist system at the root of Haiti’s exploitation and called for oppressed people to fight for their liberation. Kerbie Joseph from the Party for Socialism and Liberation stated, “Let me tell you a secret. They are afraid of us. We have the whole world represented here against white supremacy!”

Speakers from Palestine, the Philippines and Puerto Rico all expressed their desire for a movement of global solidarity and unity of oppressed people. Amin Husein of Decolonize This Place said “We are all experiencing a resurgence of an intense kind of colonialism…It is pay up, shut the borders and maintain the empire. We have to face it together or we are all screwed.”

After the program ended the crowd stayed to dance to the music echoing around Wall Street and sing in Creole, “Donald Trump, when we are mad, don’t mess with us.” The 1804 Movement will continue to organize against the racist attacks of the Trump administration.