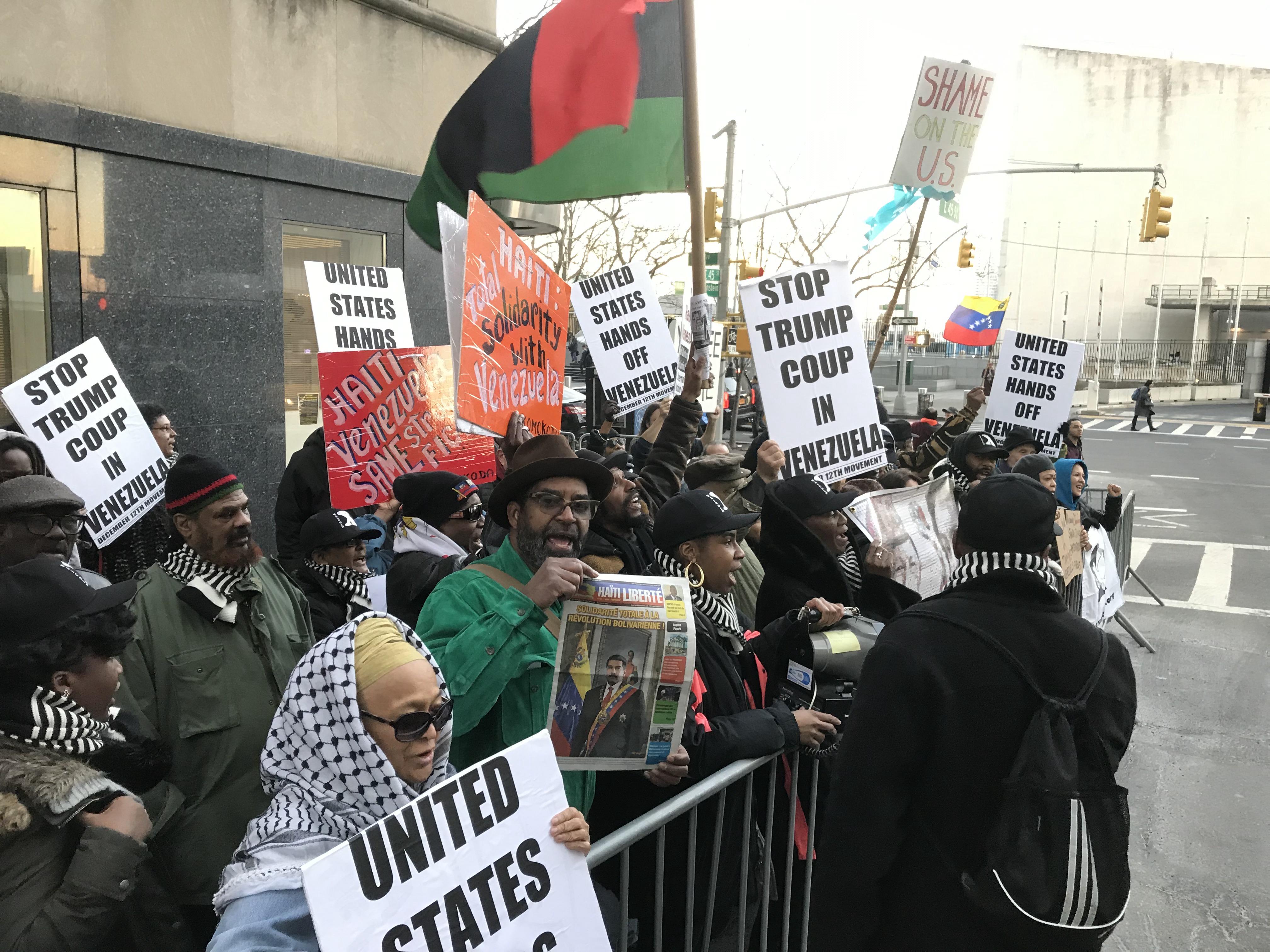 Photo: Many Haitians turned out for the Feb. 4, 2019 demonstration organized by the Dec. 12 Movement in support of Venezuela at the U.S. Mission to the UN in Manhattan.

In response to the call for a national march on Trump’s White House in Washington, D.C. on March 16 to oppose the threatened coup d’état in Venezuela, Haïti Liberté and other Haitian groups are organizing buses that will leave that day at 6:00 a.m. from in front of Haïti Liberté, 1583 Albany Ave., Brooklyn, NY 11210.

In 2006, the governments of Haiti and Venezuela signed the PetroCaribe accord, under which Venezuela provided Haiti about 20,000 barrels of oil daily. Haiti had to pay only 60% of the bill up front, while 40% of the oil revenues went into the “PetroCaribe Fund,” which was repayable after 25 years at 1% interest. The fund was to be used to pay for schools, hospitals, roads, social programs, and other projects to help lift the Haitian people out of poverty.

However, the PHTK party’s Michel Martelly, installed as president in a 2011 rigged election by then Secretary of State Hillary Clinton, squandered most of the PetroCaribe Fund, including using it to help elect his protégé Jovenel Moïse in 2016. Today Moïse’s PHTK government has sided with Washington in calling Pres. Nicolas Maduro “illegitimate” in a January 10 Organization of American States (OAS) vote.

Haitians across Haiti and its diaspora are outraged by this obscene betrayal of the Venezuelan peoples’ solidarity. On February 7, tens of thousands around Haiti marched to call for Jovenel Moïse to resign.

The Haitian community will show its solidarity with the Venezuela people, to repudiate Jovenel Moïse, and to oppose any Washington-backed coup or invasion. Haitians from throughout the eastern United States will converge in Washington, D.C. on March 16, and we encourage everyone to join us there!

Follow this link if you're interested in receiving transportation details from your area, and/or signing on as an endorser, volunteer, or transportation organizer!

Donate to the march! It costs many thousands of dollars to organize the logistics, print the outreach materials and reserve the transportation for this National March. This effort relies on supporters like you.

On Saturday, March 16, thousands of people will march in Washington, D.C. against the Trump administration’s effort to engineer a coup in Venezuela and a new devastating war there. The aggressive policy against Venezuela repeats the ugly pattern of wars for regime change in the oil-rich countries of Iraq and Libya. National Security Advisor John Bolton is reading from the same script, declaring a “troika of tyranny” in Latin America (like the “axis of evil”) as a precursor for regime change first in Venezuela, and then Cuba and Nicaragua. Trump has always said that the “mistake” of the Middle East wars was that the U.S. didn’t “take the oil.”

On March 16, the people of the United States will come together to say:

Follow this link if you're interested in receiving transportation details from your area, or signing on as an endorser, volunteer, and/or transportation organizer!

Donate to the march! It costs many thousands of dollars to organize the logistics, print the outreach materials and reserve the transportation for this National March. This effort relies on supporters like you!