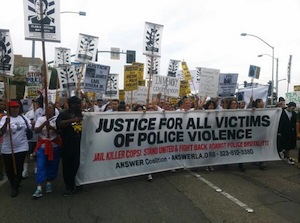 On July 21, 2013, over 1,200 people poured onto the lawn of City Hall in Anaheim, Calif., for the first Statewide March to Stop Police Brutality. The mass protest marked the first anniversary of the uprising against police sparked by the racist murder of two men by cops and the brutal attack on bystanders that was featured in the mass media throughout the country. People traveled from Oakland, Sacramento, Fresno, Bakersfield, San Diego and many other cities and towns across California to demand an end to police violence and justice for all victims.

The protest was initiated by more than thirty families who have lost loved ones at the hands of the police from around the state who have formed a network that took action as a group for the first time on July 21. The ANSWER Coalition partnered with these families to organize the demonstration and countless organizations mobilized to attend, including Women Organized to Resist and Defend, Justice for Alan Blueford Coalition, KmB – Pro-people Youth, Justice for Trayvon Martin – LA, National Brown Berets, Worker-Student Alliance of UCI, ONYX Organizing Committee, Fresno Brown Berets, Todo Poder al Pueblo and many more. The unity of families and grassroots organizations at the demonstration was unprecedented in recent history and showed the great potential for a massive movement against police brutality and other forms of state repression. This potential was further evidenced by the dozens of new families who joined the network and organizations on the day of the march for the first time.

The march was led by a contingent of the families who carried flags high above the protest that depicted their loved ones. These flags were hoisted up throughout a rally as each family spoke about the individual cases of police murder in front of Anaheim Police headquarters, which the protest forced to close down for several hours. Not far behind the families was a WORD contingent lead by women of color who asserted that the fight against police brutality is a feminist issue because the war on predominantly Black and Brown young men has had a devastating effect on all members of oppressed communities.

The ANSWER Coalition alongside Justice for Trayvon Martin – LA also organized a contingent to demand justice for Trayvon – drawing the connection between the impunity shared between racist vigilantes and police when it comes to committing murder.

Anaheim, once dubbed ‘Klanaheim’ for its support of Southern-style vigilante racism, has a long history of police brutality and oppression of the Latino workers who reside in what’s called ‘lower’ Anaheim. The first uprising against segregation, poverty and police brutality took place in 1978 – called the Little People’s Park Riots. The march through Anaheim circled the Little People’s Park neighborhood to commemorate this historic turning point in Orange County and to underscore the decades of abuse suffered by poor and working communities throughout the state at the hands of police.

Protesters took aim at more than police brutality by carrying signs that read “Disney supports police violence and gentrification”, highlighting the role played by Disneyland in city politics, where they buy out election campaigns and work alongside multi-million dollar developers to transform many parts of the city for profit. These schemes are pushed through the Save Our Anaheim Resort area coalition, SOAR, which is made up of a cross-section of Disney interests, developers, heads of tourist industry and former police chiefs.

In essence, these major corporations push the Latino workers into compartmentalized, ghettoized neighborhoods through police terror in order to create a more friendly appearance for tourists while maintaining a highly exploitable workforce to fill the service sector of the industry. These interests are also behind the ongoing fight of the political establishment to not allow district voting because maintaining at-large elections guarantees the dominance of the wealthy Anaheim Hills community over the majority of poor and working people, mostly Latinos. Many in the local community decried this throughout the demonstration as naked disfranchisement of Latino workers.

Other signs raised additional demands of the march, such as an end to gang injunctions, which were used last year in ‘Operation Halo’ in order to retaliate against the local community for their defiance by rounding up and arresting those listed on the injunction in an attempt to quell the resistance and devastate the community. The massive demonstration, however, showed the police that no attacks on the local community could stop the movement.

Demonstrators also led chants in support of the undocumented who are brutalized by ICE agents, imprisoned and deported. One of the central demands of the march was an end to border killings – drawing the connection between the role played by police in the neighborhoods and border patrol agents who have murdered over 15 people in recent history. After circling the Little People’s Park neighborhood the demonstration closed back at City Hall, where protesters vowed to continue to build a statewide coalition of families and organizations that will have the power to challenge the broad system that allows murderer police to walk free.