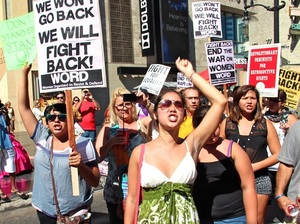 We Won't Go Back, We Will Fight Back!

On August 23-26, WORD is calling for nationwide demonstrations in honor of Women's Equality Day to to stop the right-wing attacks targeting women’s rights and the rights of all oppressed people. On the East Coast, WORD is mobilizing a contingent to participate in the march and rally commemorating the 50th anniversary of the March on Washington in Washington, D.C.

In light of recent attacks on abortion rights, voting rights, workplace protections, and the lives of Black and Brown youth, we are calling for united demonstrations to fight back against what we believe is a coordinated right-wing attack. The right-wing forces who have historically held power in this country hope to turn back the clock as the only way to maintain their power in the face of a changing nation. They seek to undo the gains won by the Civil Rights movement, the movement for women’s rights and every progressive movement that has changed the history of this country for the better.

We must stay in the streets to defend the gains of our movements and to push for greater rights, for greater equality for all. Join us on August 23-26 to say: “We won’t go back! We will fight back!”

The past few years have seen an unprecedented, state-by-state attack on our right to legal, safe abortion, a right that was won through the militant and determined struggle of the women’s movement, over 40 years ago. In 2011, states enacted 92 laws that restrict women’s access to abortion. In 2012, 42 new laws were passed. This past year we’ve seen some of the most heinous attacks on Roe v Wade introduced in our time. TRAP laws are in place in 22 states and all over the country legal bans on abortion as early as six weeks have been introduced in states like North Dakota and Arkansas.

This attack on a woman’s right to choose, a basic and core demand of the feminist movement, comes in the context of a wave of attacks against historical victories won in all people’s movements.

In June, the Supreme Court struck down Section 4 of the Voting Rights Act, essentially gutting this important constitutional protection of the right of all people to vote.  In the wake of this decision, numerous voter ID laws and racist gerrymandering measures have flooded state courthouses. People of color and poor people, those who historically fought so hard for the right to vote, are now in real danger of losing the ability to access that right at all.

The recent Supreme decision Vance v. Ball State University has also stripped away important workplace protections against racial or sexual harassment on the job, another gain won by the women’s movement and the movement for Civil Rights.

The recent acquittal of the racist murderer George Zimmerman in Florida provides another illustration of a country going back in time. Zimmerman’s acquittal can’t help but remind us of the murder of Emmet Till - or the untold numbers of lynching cases throughout the deep South, where the white men who murdered Black men in cold blood were rarely, if ever, brought to justice. In the same state, Marissa Alexander, an African American woman, remains imprisoned serving a 20-year sentence for firing a warning shot to defend her life against her abuser.

It was the Civil Rights movement that changed this equation, but in 2013 it looks as though that gain is all but undone. From Zimmerman to the ever-expanding Prison-Industrial Complex to the high incidence of police murder in our communities across the country, this deeply racist IN-justice system has declared an all-out war on the lives of Black and Brown youth. We must organize not just to defend our rights but also the lives of our children, our future and our communities.

Join WORD in the streets August 23-26 in united actions nationwide to defend all of our rights against this right-wing attack. Saturday, August 24, is the 50th anniversary of the historic March on Washington, an important turning point in the struggle for Civil Rights. August 26 is National Women’s Equality Day, a holiday that commemorates the ratification of the 19th Amendment that granted women the right to vote, a right fought for and won by the heroic suffragettes. What better way to commemorate these important holidays than by staying in the streets to defend the very rights for which our forebearers fought?

This resolution was passed at the WORD Regional Women’s Organizing Conference in Los Angeles on June 29, 2013.

Whereas the right-wing has led a state-by-state campaign to gut women's rights, focusing its efforts on areas where women are the most marginalized and is building a national campaign to destroy any access to reproductive rights. They have led a similar campaign to deny immigrants and people of color, particularly African American and Latino people, voting and other rights, and

Whereas the multitude of legislative actions that restrict reproductive rights, enable violence against women, undermine services and limit educational access that help the poorest women constitutes a verifiable war on women's rights, and

Whereas we understand that women—who make up more than half the population, who bear the brunt of poverty—have a stake in fighting to end racism, poverty, war and inequality everywhere for everyone, and

Whereas the Supreme Court has eviscerated the Voting Rights Act and trashed the law that would help women workers and workers of color facing discrimination and abuse on the job, and

Whereas the women of Texas have shown that when we mobilize and fight back, we can win, and that the struggle in Texas needs to be repeated, broadened and expanded to every state, city and town.

Therefore be it resolved, the women attending the Saturday, June 29 conference organized by WORD, will organize demonstrations on the weekend of Women's Equality Day, August 26. We further invite women and women's groups across the country to hold speak-outs, rallies and marches and other actions from Friday, August 23 to Monday, August 26.