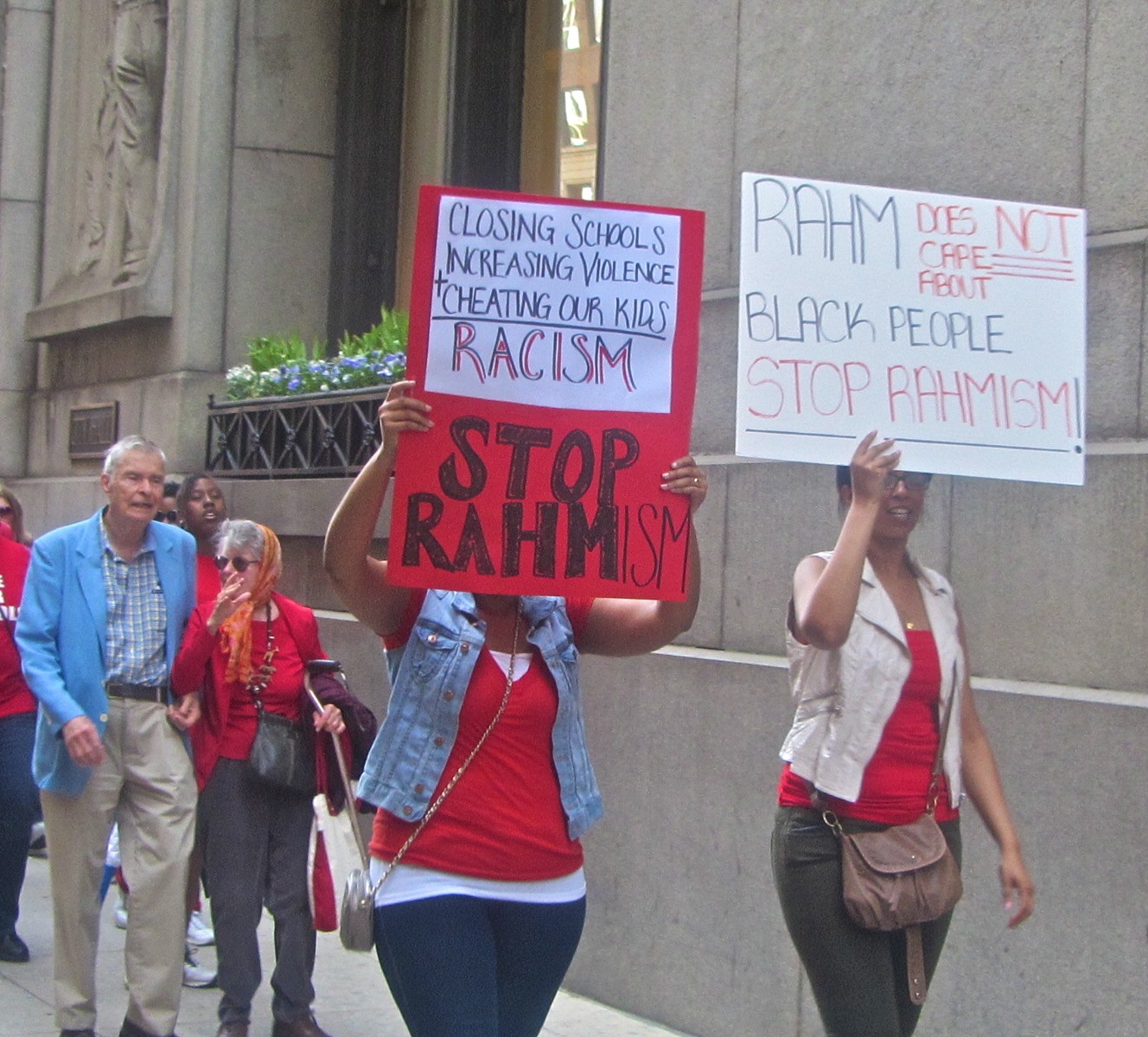 On Feb. 28, students and youth protested and sat-in demanding that their school stay open. Meanwhile, the process of racist gentrification in Chicago rolled on as Mayor Rahm Emanuel’s appointed school board passed a motion to close the last four high schools in the working-class neighborhood of Englewood.

Hope, Harper, and TEAM Englewood High Schools will begin closing next year, letting current students graduate but not permitting new enrollments. This is a change from the initial plan to close the schools immediately, and was a victory for students, teachers, and their supporters who have been fighting the plan since it was announced. However, Robeson High School will close forever in June, with students having to travel to new schools and teachers forced out of the job.

Liberation News has been covering this story for months, and attended one of the public meetings that the Chicago Public Schools system sponsored allegedly so members of the community could have their say.

Current students and parents took to the microphone to voice their anger about the plan to unilaterally shut down their schools. Ashley Rodriguez, a student at Harper, told the crowd about how she was transformed from a D student to B student at Harper and was hoping to go to college. “If I didn’t have Harper, I don’t know where I’d be right now,” Rodriguez said as she talked about the relationships she had made with teachers and how she felt everyone at the school was invested in her success.

Parents echoed Rodriguez’s sentiments, expressing concern that CPS’s promises to provide bus cards for students to attend schools in other neighborhoods were insufficient: if kids have to cross gang territory to get to their new schools, parents want more assurances that their kids will be kept safe. Community members made clear that they do not want more police patrolling their neighborhood. They said they need real solutions to the problems of poverty and lack of opportunity.

Community members disputed CPS’s claims that the new $85 million dollar high school scheduled to be built as a replacement to the four closed ones in Englewood will be the panacea that City Hall says it to be. “The question is not whether the new school should open, it’s what will happen to the kids in the schools now,” a parent of a current student pointed out.

The people of Englewood want investment in their community, but they also want to have a say in how that money is spent. Community leader Harold Smith noted that, “They say it takes a village; when are the decisions going to be made with a member of our village in the room?”

As the meeting progressed, decorum broke down as counter-protesters, suspected by many in attendance as being paid by City Hall, shouted down critics of Rahm’s policies by chanting, “New school! New school!” The police shielded these disruptors from attempts by the community to shut them down and proceed with the hearing.

Speaking to Liberation News, a current student at Hope, Jamaryia, noted the farcical nature of the affair. As a lifetime resident of Englewood, she said had never heard of the organization that engaged in the disruption. “They’re not fighting for their own community. They’re not fighting for us,” Jamaryia said, adding that the sit-down students had had with CPS was useless. “Our concerns went in one ear and out the other.” Jamaryia said she would have to go to Simeon or one of the Perspectives Charter Schools if Hope closed this year.

The Chicago Sun-Times eventually confirmed that many of those in support of the closings were CPS contractors or from Chicago suburbs far from Englewood. Why did city government push so strongly for these schools to be closed? First, the Chicago political machine has been trying to supercharge their efforts at gentrifying the city and making it more difficult for the working class to live here. Their racist attack on the people of Englewood is part of a long war against Black people in the city. The tactics that accompany this war are manifold but closing schools to make a good education more difficult obtain, increase the cost of living by limiting the construction of affordable housing, decreasing investment in struggling neighborhoods where there are a lack of opportunities, and throw more racist cops on the streets to keep the school
to prison pipeline running smoothly.

The second rationale for the school closings is part of a broad effort to weaken one of the strongest teacher’s unions in the country, the Chicago Teachers Union Local. CTU has shown that it is ready and able to advance the demands of its body in a forceful way. Memories of the 2012 strike and 2015-2016 contract negotiations still loom large in the minds of the technocrats in City Hall.

The closing of these four high schools and the transformation of National Teachers Academy from an elementary school into a high school is part of a larger effort to assault public education. As Jamaryia’s testimony demonstrates, many students at the closed Englewood schools will be forced to attend charter schools. This is something the Emmanuel administration considers to be a win-win situation: the closure of these public high schools weakens the union and will send more children to charter schools, many of which are run by wealthy Chicago businessmen as pet projects.The current governor, billionaire Bruce Rauner, has a charter school of his own, as does gubernatorial frontrunner JB Pritzker, another billionaire. Closing public schools puts more money in the pockets of the allies of the political machine.

All revolutionary and progressive people should stand with parents and students of Chicago public schools who have seen their education come under attack. It is time to stand up to this corrupt system and say, “Enough is enough!”