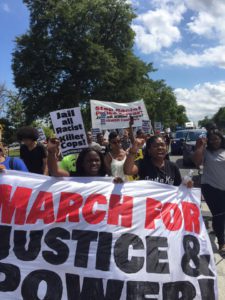 On August 6, a multinational coalition of Chicagoans came together in a march to demand justice and power for Black and Brown lives and to fight back against the implementation of a racist “Blue Lives Matter” bill being introduced in the city council. The march, organized by Black and Brown youth in the city was planned to coincide with the 50th anniversary of Martin Luther King Jr.’s historic march in Marquette Park to demand fair housing and an end to racist discrimination in the city.

On that day, King and those marching alongside him were confronted with a torrent of racist abuse from white residents and authorities. Many, threw stones and bottles, striking protesters and knocking them from their feet. Remarking on the march, King said that, “I have seen many demonstrations in the South, but I have never seen anything so hostile and so hateful as I’ve
seen here today.”

For many protesters on Saturday it seemed that Chicago continues to claim that dubious honor of hatred. Fresh on people’s minds was the murder of Black teenager Paul O’Neal who was shot in the back by Chicago police on July 28. Tali Arroyo, a speaker at the rally and a student at Northeastern Illinois University delivered a powerful spoken word piece which declared, “I know who killed Paul O’Neal, every cop who ever lived.”

Just one day before the August 6 march, the city released bodycam footage of O’Neal’s killing which occurred in the city’s South Shore neighborhood. While footage of the fatal gunshot itself is suspiciously absent, the videos from before and after do capture the reckless disregard of the CPD as they fire multiple shots into an open street. Their total disregard for Black life becomes blatant as one hears the cop who shot O’Neal lament that he would be “put on desk duty for 30 days” because of his crime.

For those marching, O’Neal’s murder was just one more sign of the urgency of the struggle for Black lives and the pressing need for victory.

People began to gather at 12:30 on the city’s southwest side near Western and Marquette. Ana Santoyo, one of the protest’s organizers and co-cordinator of the ANSWER Coalition in Chicago explained the march’s rationale: “Today we march on racist Burke’s office to stop the Blue Lives Matter ordinance, stop police terror and get money for jobs and education! We say no more money for SWAT teams and cages for poor people and people of color. No more money for armed racist gangs like the CPD!”

Ashanti Andrews, president of the NAACP at Whitney Young High School, delivered a call and response speech with a classmate that repeatedly returned to the refrain “enough is enough,” a sentiment which was echoed by many other speakers, including Nia Martin and Akilah Smith who asked why we have to keep saying Black lives matter in order to make it a reality, especially in a climate which tries to pretend that already “all lives matter. ‘

At around 1:30 the people took to the streets to march miles up Western Avenue to the offices of Alderman Ed Burke, sponsor of Chicago’s Blue Lives Matter bill, which would actually extend hate-crime legislation to police, making a complete mockery of the intent of such laws. (More information on these heinous laws and how they work to criminalize dissent can be found
here).

Ciju Francis, one of the organizers of the march, said: “We have a message for Ed Burke. We will not you destroy our civil liberties. We will protect our communities from police violence.”

Along the way, motorists honked in support and passersby shouted along with raised fists. The people marched enthusiastically, yelling with vigor, “CPD, KKK, How many Pauls will you kill today?” And “Hey Burke, let’s face it, Blue Lives Matter is racist!”

After a spirited march the people arrived at Burke’s office on 51st street. One man placed a sign that read “Operation Body-Cam Coverup” on the alderman’s door, a reference to the missing footage from the city’s recently released tape of Paul O’Neal’s murder, while a die-in was staged on the office’s front steps.

The march was a compelling example of the multinational and multi-generational unity that can provide a path forward for the movement. One man present who had marched with Dr. King on these same streets 50 years spoke of how much encouragement it gave him to see so many young people out on the streets, and to know that the fight to end racism, police brutality and white supremacy still goes on.

As one participant said, the last thing the cops and the establishment want is to see young and old, white and Black, men and women, LGBTQ and straight marching together to demand justice.

Yet that is precisely what they’re encountering as the movement for Black lives continues to grow and gain strength.