The people stand against the NATO Summit in Chicago 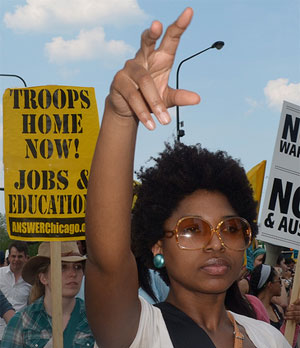 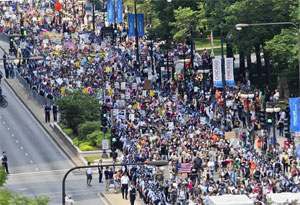 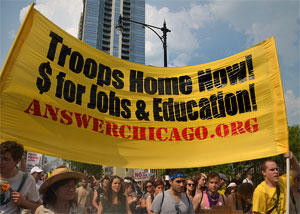 Responding with determination in the face of an organized campaign of government threats and intimidation aimed at anti-NATO protesters, an impressive number of young people, union members, antiwar organizations and community members filled the streets to demand “U.S./NATO Out of Afghanistan Now!” during the opening day of the NATO Summit.

The Coalition Against NATO/G8 War and Poverty Agenda (CANG8) estimates the crowd size as about 15,000.

In the week leading up to the NATO Summit, thousands of people marched and rallied in Chicago. The actions included a large rally of nurses demanding higher taxes on the rich and a march on Mayor Emanuel’s house, 1,000 people strong, which demanded “Health Care not Warfare!”

People came in buses, by train and by car caravan from all over the country to take a stand in Chicago against imperialist war and capitalist austerity.

In a moving display of solidarity with the people of Afghanistan and the Middle East at the end of the march, Afghanistan and Iraq veterans took off their medals and hurled them toward the NATO Summit grounds. One of those who returned his medals, Marine Vince Emmanuelli, said: “Our enemies are right here and we look at them every day. ... They are the millionaires and billionaires who control this planet and we’ve had enough of it.” (WBEZ Chicago)

Though the military machines of NATO are the greatest purveyors of violence in the world, local and federal law enforcement agencies and the media engaged in a months-long attack campaign against protesters and protest groups.

The Chicago chapter of the National Lawyers Guild set up a 24-hour hotline to provide support for people who were arrested before and during the NATO protest.

Prior to the May demonstration, the NLG Chicago chapter reported:

“More than two-dozen people had been arrested so far in the lead up to the NATO summit. At least 7 arrestees in addition to the ones with terrorism-related charges are currently in custody.

“During a Wednesday night house raid, police broke down the doors of multiple apartment units with guns drawn and searched residences without a warrant or consent. In addition to 9 arrests made that night, NLG attorneys believe that two undercover police or confidential informants were arrested with the others and were later released. Of the 9 activists arrested, 6 were released without any charges despite being shackled for at least 18 hours in solitary confinement and denied access to attorneys.”

At the May 20 mass march, a police mob surrounded and brutally attacked the demonstration as it was winding down, swinging their clubs at people’s heads and injuring many dozens. At least 45 people were arrested. Among those injured were ministers, community activists, journalists and others who tried to rescue people from police.

The ANSWER Coalition in Chicago went all out to build the March on the NATO Summit, both through street outreach and social media outlets, and had a big presence at the protest with banners and placards and large amplified sound that unified large numbers of marchers with booming chants. The banners and placards read: “No War on Iran! Hands off Syria!”, “Troops Home Now! Money for Jobs and Education!”, “Unite the 99%: Fight Racism!” and “U.S./NATO Out of Afghanistan Now!”

Asked what she thought of the protest, ANSWER organizer Ymelda Viramontes said: “Today’s protest shows that the people can and will resist the government and Wall Street’s attempts to bully and silence us. The number of people that came out into the streets of downtown today to show solidarity with the people of Afghanistan, Iran and Syria and demand no U.S. or NATO intervention—that’s a good indication that we can build a powerful movement against war and racism right here in the U.S.”

Please support the ongoing anti-war work of the ANSWER Coalition by making an urgently needed donation.