It was the CIA that helped jail Nelson Mandela 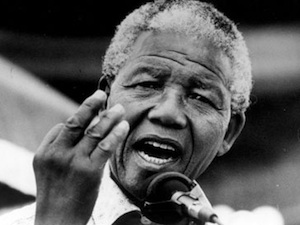 The following article was published to the ANSWER Coalition's website on July 18 to honor Nelson Mandela on his 95th birthday. The ANSWER Coalition joins the millions around the world mourning the loss of this legendary fighter for liberation. As we remember his life, and as corporate media outlets attempt to co-opt it, it is important to keep in mind that Mandela was a revolutionary targeted by U.S. imperialism.

(July 18, 2013) Today is Nelson Mandela's 95th birthday, but forget the crocodile tears from the U.S. government about Mandela's poor health. Imperialist diplomacy with all of its sugar-coated phrases is nothing more than a form of historical perjury.

Nelson Mandela’s arrest in 1962, which led to 18 of his 27 years of imprisonment on Robbins Island, was based on the work of the CIA. The CIA and National Security Agency worked as partners with the racist, apartheid regime’s vicious military and intelligence services.

Mandela was a leader of the African National Congress (ANC) that organized civil resistance and an armed struggle against South Africa’s white racist apartheid regime. The United States and the other western capitalist governments supported the racist, fascist apartheid regime.

Mandela was labeled a terrorist by the United States. So was the entire ANC. Even as late as 2008 the U.S. State Department had to pass special waivers so that Mandela or any ANC leader could visit the United States because he and the ANC were still on the “terrorist watch list.”

Even after the fall of the apartheid government ANC members applying for visas to the USA were flagged for questioning and forced to ask for waivers to enter the country. Former ANC chairman Tokyo Sexwale was denied a visa in 2002

U.S. Imperialism was the enemy of African Liberation

The CIA and NSA spy services—with the full collaboration of such transnational corporations at IBM,  Kodak and many others—worked at all levels and for decades for apartheid and against the African National Congress activists who were routinely murdered, tortured and sentenced to life terms in the hell holes of South Africa.

The ANC was labeled and treated as a terrorist organization and pro-communist by the CIA and successive U.S. administrations, Democratic and Republican alike. Congress, too, was an enthusiastic cheerleader for this vile partnership with the planet’s most disgustingly racist regime.

The House of Representatives only voted to call for Nelson Mandela’s release from prison in 1986 when it was clear that the fascist apartheid regime’s days were numbered, leading the United States and Britain to abruptly shift course and broker a negotiated end to the white supremacist system. A mass worldwide anti-apartheid movement had completely isolated South Africa. Dick Cheney voted against the House resolution in 1986, pointing out that the U.S. government was still retaining the ANC on the official  U.S. “terrorist list.”

The U.S. and Britain knew the end had finally come for the usefulness of the apartheid government when its seemingly invincible military was decisively defeated by the Angolan army and thousands of Cuban volunteers in the historic battle of Cuito Canavale.

In an act of shameless duplicity, once Mandela was released from prison, each successive U.S. administration  has pretended that the United States was always opposed to Mandela’s imprisonment and stood with him against apartheid.

After getting out of prison, Mandela came to the United States to meet President George H.W. Bush on June 25, 1990. He was being touted as a hero and a champion in the fight against racism. The U.S. government, working through propagandists in the corporate-owned media, tried to instill a society-wide case of amnesia about the fact that they were the defenders of apartheid and directly responsible for Mandela’s imprisonment.

But one reporter had the gall to ask an unscripted question.

Bush’s press secretary, Marlin Fitzwater, was asked in the days before the June 25 meeting with Bush whether the president would apologize to Mandela for the U.S. role in his arrest.

Fitzwater was angry and caught off guard. He said, "I just don't like it when people question our motives on blacks or on Mandela because of an incident that happened 20 years ago in another administration."

Today, on Mandela's 95th birthday and when the U.S. government celebrates Mandela, will any of the corporate media expose the bloody role of the CIA, NSA and other U.S. intelligence services in their war against the African liberation movements?

Nelson Mandela is a beacon for the oppressed. He is a hero and he will be remembered as such. Not true for the CIA and NSA which worked as the spy service for the racist, apartheid regime as it hunted down and captured Mandela and captured or killed his comrades.