A special International Solidarity and Awards Session will take place on Saturday, Nov. 13, at 6:30pm as part of the two-day National Conference sponsored by the Party for Socialism and Liberation  at the University of Southern California Davidson Conference Center (located at 3415 S. Figueroa Street in Los Angeles). The conference begins at 9:30am on Saturday, Nov. 13 and at 9:00am on Sunday, Nov. 14.

Featured speakers and award recipients in attendance will include:

Ramsey Clark is an internationally-renowned progressive attorney and human rights activist. His remarkable career has included active opposition to U.S. wars and interventions from Vietnam to Central America to Afghanistan. Ramsey has defended numerous political prisoners, among them the San Quentin 6, Leonard Peltier, Father Phil Berrigan and Lori Berenson. He has been a leader in the movements against sanctions and blockades targeting Iraq, Cuba, Yugoslavia, Iran and other countries. In 2003, Ramsey drafted articles of impeachment against George W. Bush, Dick Cheney, Donald Rumsfeld and others for war crimes.

Thirty-eight years ago, deep in rural Louisiana, Robert King Wilkerson was one three young Black men silenced for trying to expose continued segregation, systematic corruption and horrific abuse in the biggest prison in the United States, Angola. Eager to put an end to outside scrutiny, prison officials began punishing inmates they saw as troublemakers.

Herman Wallace, Albert Woodfox and Wilkerson—now known as the Angola 3—were charged with murders they did not commit and thrown into solitary cells for decades. Woodfox and Wallace remain in solitary confinement. Wilkerson was released from prison in 2001, and will accept the "Fighters for Justice" award on behalf of the Angola 3.

Mara Verheyden-Hilliard is a civil rights lawyer and co-founder of the Partnership for Civil Justice Fund, a public interest legal organization in Washington, D.C. that handles key constitutional rights litigation, particularly concentrated in the areas of free speech, assembly or other protected political organizing activity.

Heidi Boghosian is the executive director of the National Lawyers Guild. She is the co-host of the weekly civil liberties radio show Law and Disorder on Pacifica’s WBAI in New York and over 25 national affiliates.

Boghosian received her JD from Temple Law School where she was the editor-in-chief of the Temple Political & Civil Rights Law Review. She has an MS from Boston University and a BA from Brown University.

Imam Bray is also an organizer against the U.S. wars on Afghanistan, Iraq and U.S.-Israeli aggression against the Palestinian people. He is the author of several books and is a frequent speaker in cities across the United States. 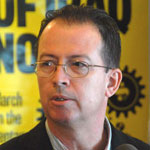 Brian Becker is the National Coordinator of the ANSWER Coalition and a leading member of the Party for Socialism and Liberation. Becker has been a central organizer of the mass anti-war demonstrations that have taken place in Washington, D.C. over the past decade. He has appeared extensively on national and international media outlets.

PSL members and guest speakers at the National Conference include the following well-known activists and organizers:

These are just a few of the speakers who will be present. Click here for a full conference schedule.

Make sure you register for the National Conference on Socialism today. Be there and bring your friends, family, co-workers, co-students and everyone you know.