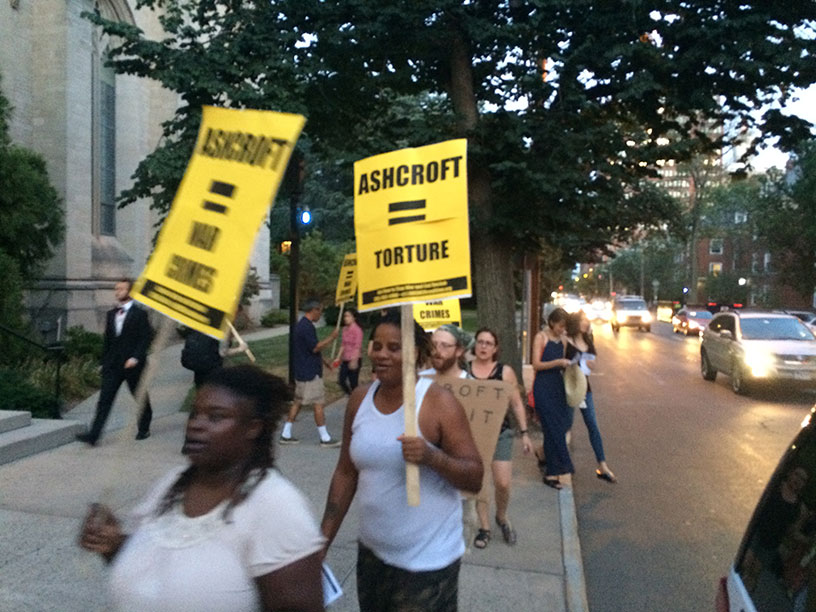 On Sept. 8, students at Yale University and community members from across New Haven and Connecticut protested outside Yale’s Sheffield-Sterling-Strathcona Hall, where former U.S. Attorney General John Ashcroft was scheduled to speak.

The demonstration was called after organizers found out that Ashcroft had been invited to speak by the Yale Political Union. During his tenure as George W. Bush’s Attorney General, Ashcroft oversaw sweeping attacks on the civil liberties of Latin-American immigrants in the United States, of Muslims and Arab-Americans and of progressives and activists who challenged these attacks. He pushed Congress to pass the USA Patriot Act immediately after 9/11, which significantly increased the U.S. government’s ability to perform domestic and international surveillance. Ashcroft also implemented and defended torture practices including waterboarding and sleep deprivation in the U.S. prison at Guantanamo Bay, Cuba, as well as CIA prisons across Europe and the Middle East.

Emily Hays of Blue Haven, a Yale student organization, denounced a number of Ashcroft’s crimes against the people, including upholding sentencing differences between powder and crack cocaine, denying benefits to partners of LGBTQ victims of 9/11. “I’m here because I’m ashamed that my university and the YPU [Yale Political Union] has invited John Ashcroft to speak. I’m ashamed that the U.S. has not yet arrested the war criminals involved in the human rights violations during 9/11 and afterwards.”

Dawnie, an organizer with Black Lives Matter - New Haven, told the crowd that “anyone against LGBT rights or anyone against our civil rights should have something to answer to and shouldn’t have privileges to speak at Ivy League schools.”

Inside, as Ashcroft began to speak, activists interrupted him, saying “The people have an announcement form the floor. John Ashcroft is guilty of war crimes and must be charged and tried. There is no debate. Children in Iraq and Afghanistan were not allowed to defend themselves. Men in Guantanamo couldn’t even see documents against them. John Ashcroft is a war criminal!” As they were forced out by Yale Police, they chanted “No justice, no peace!”

Another demonstrator later demanded to know, “Whose liberty? The liberty of Arab-Americans?” Ashcroft had been invited to speak on the topic “Liberty is the purpose of government”

As the demonstration in New Haven made clear, the war criminals in the U.S. government who brought so much destruction and pain to people of the Middle East, Africa and here in the United States can and must be challenged everywhere they go.