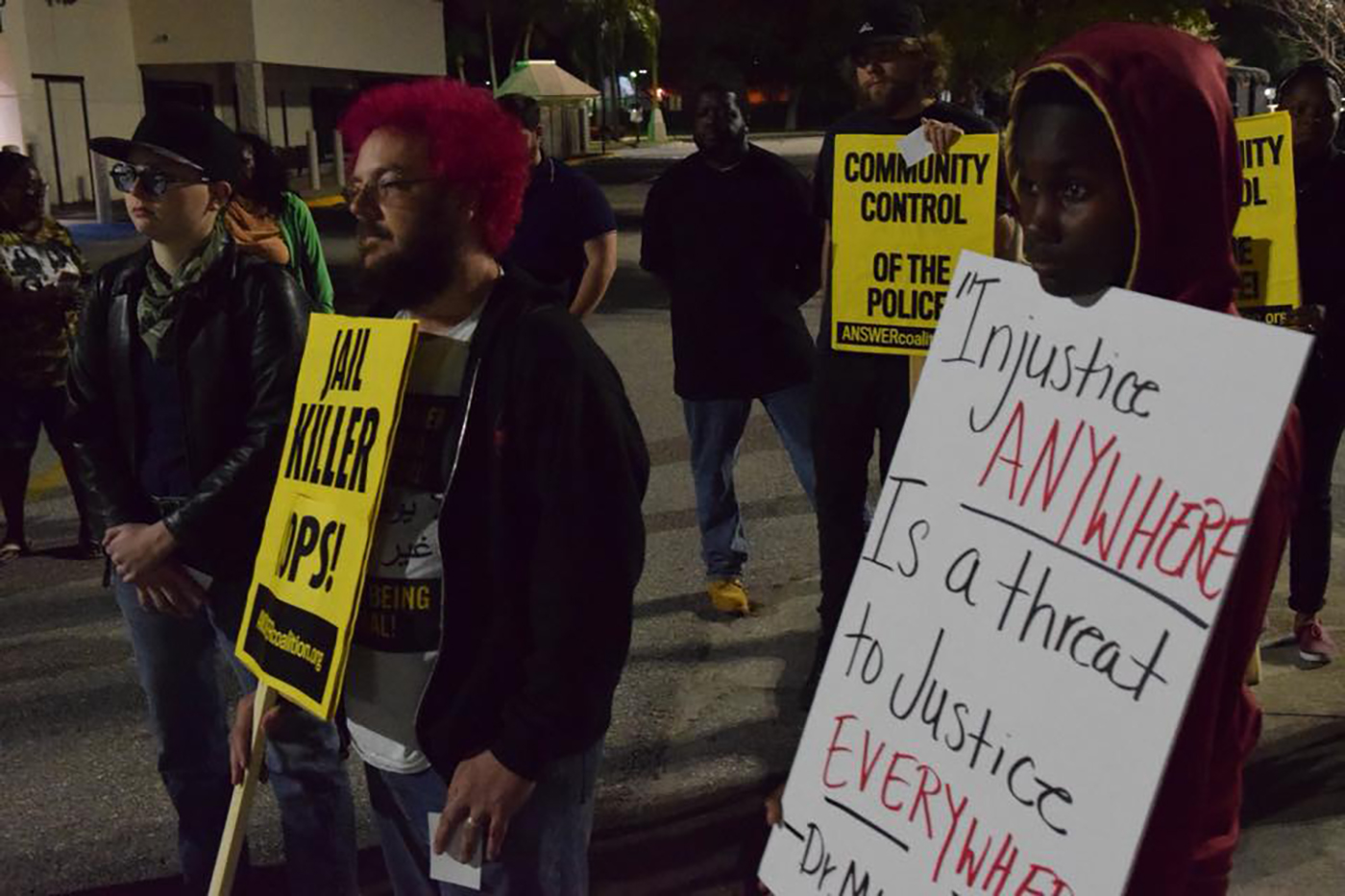 On Tuesday, January 23, a Manatee County, Florida, sheriff’s deputy shot Corey Mobley, an unarmed Black man, four times while a K-9 attacked him on Sixth Street West in Bradenton. Mobley was taken to Sarasota Memorial Hospital, where he died. He was 38 years old.

Minutes before the killing, Mobley and his wife were meeting at the Marathon gas station on Cortez Road to exchange custody of their four children. During an argument, Mobley began pulling his wife’s hair while she was in her car. Bystanders intervened and Mobley drove away before deputies responded to the scene.

Around 9:27, two plain clothes deputies in tactical gear spotted Mobley and gave chase to him on foot. The officers’ K-9 eventually caught up to Mobley and attacked him. Deputies claim that they shot Mobley after he threatened to shoot them while being attacked by the dog. No gun was found.

“My cousin was a loving father, big on sports, big on family values,” Jonathan Pierre Cornell told Liberation News. “It hurts my core he’s gone. Guns and careless activities wasn’t something we learned. So I’ll never believe what they say.”

Mobley was the first cousin of Rodney Mitchell, who was murdered in 2012 by Sarasota County Sheriff’s Office. He also supported his family’s years-long struggle to get justice for Mitchell, led by Mitchell’s mother Natasha Clemons and the Rodney Mitchell Foundation.

Manatee County Sheriff Rick Wells held a news conference Wednesday morning. He alleged that deputies and three other witnesses heard Mobley tell officers “I have a gun for you.” According to Wells, Mobley also put his hands in his waistband—a disturbingly frequent accusation by police against unarmed Black and Latino men. There is allegedly no video or audio of the chase or killing.

The investigation will be handled “internally” by the Manatee County Sheriff’s Office, who were accused in 2014 of murdering 22-year-old Elias Guadarrama in a similar chase. In that case, family and friends claim that deputies covered it up by making it appear as a suicide.

The comments section of the press conference’s livestream quickly filled up with community members’ expressions of disbelief and anger.

“Must have been superman, fighting a dog, falling down and reaching in his pants and getting shot 2 more times. Dangerous while being Black. This Life was Snuffed out. Sorry for his children. This story not coming together.”

“…We just talked about Domestic Violence and involving police as moderators. There’s clearly a lack of training or failure to use proper techniques for deescalating situations”

“Instead of shooting why didn’t you use your taser? he said he had a gun, never pulled it out, therefore no need to shoot your gun”

On Friday night, the Rodney Mitchell Foundation held a vigil and march against police brutality, supported by Black Lives Matter Manasota Alliance, ANSWER Coalition - Suncoast, Party for Socialism and Liberation, IWW and NAACP. Community members gathered in the parking lot of DeSoto Square Mall and marched across the street to the Sheriff’s Office, where they called for justice and community control of the police.

“My question to the Manatee County Sheriff’s Office is, how does it feel to have blood on your hands,” asked Deidra Larkins, an organizer with Black Lives Matter Manasota Alliance, who also spoke about the disproportionate killing of Black people by police around the United States.

“I wasn’t really buying that story that I heard on the news,” said Jackie Daughtry, who attended the same church as Mobley and his family. “When I found out that it was Corey, I thought of his wife. Her and I were pregnant at the same time. I thought of his wife’s mother. She’s over at Just for Girls, down east, and my daughter went there since kindergarten. So it was too close to home.”

“I’m around my young kids, young Black kids, everyday and I want them to be safe,” Joshua Esaw told Liberation. “When we seen [police brutality] happen in other communities, we were like ‘it’s wrong, our lives matter and it means something’, so when it came back and it happened in this, our community— where we grew up, where we raise our families—we gotta do something about it.”

“They target the Black community because they see Black people as a soft target,” said Jeremy Thomas. “They don’t go to white communities and do as much policing because they’re afraid they might pick up a lawyer’s son, a judge’s son or a police officer’s son.”