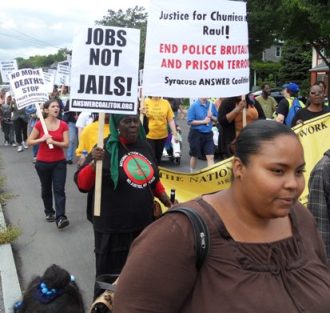 On Aug. 6, 2010, Raul Pinet Jr. was beaten brutally by Syracuse City police officers. He was thrown into a police van and taken to the Onondaga County "Justice" Center. There, Sheriff's deputies stripped him naked, forcefully restrained him and left him face-down on the floor of a holding cell. Within thirty minutes, Pinet became unconscious and died.

The police arrested Raul on charges of criminal tresspass and resisting arrest. Raul, however, was welcomed into the house on Shonnard St. by the home's owner. Raul knocked on the owner's door and asked to use the phone. He said that someone was trying to kill him. According to news reports, when police arrived on the scene the owner, a female friend of Raul's, was talking calmly with him. She stated that the police, not Raul, frightened her, causing her to run to the back of her house. The next time she saw Raul he had been slammed down a flight of concrete stairs and was lying in a pool of his own blood. Under these circumstances, it is clear to see that Raul was not "resisting arrest" but fighting justifiably and heroically for his life. The names of the police officers that were involved have never been released to the public, giving the police complete impunity.

The Onondaga County medical examiner ruled his death a homicide. According the report, Pinet died due to the method of restraint used by County Sheriffs and "cocaine-induced delerium." The latter is a bogus condition that is thoroughly discredited within the scientific community. It only appears as a cause of death alongside law enforcement brutality or misconduct.

Within days, the Syracuse community met at a forum organized by the ANSWER Coalition and the Party for Socialism and Liberation to organize and fight back. This was not the first death at the hands of local law enforcement. Less than a year earlier, in Nov. 2009, Chuniece Patterson, a young African-American woman, died at the local jail as a result of an ectopic pregnancy after she was denied medical treatment despite her cries for help. A jail nurse was called to her cell three times but denied Patterson any treatment, leaving her at one point lying in her own vomit. Statements from nurses, deputies and inmates reveal that she spent the last 14 hours of her life in immense agony.

Raul and Chuniece's deaths sparked a militant fight-back movement in Syracuse, uniting the Black, Latino, Disabled and progressive communities. A multinational and cross-cultural coalition was formed that is known as United as One. In Sept. 2010, the coalition organized an unprecedented march on the "Justice" Center, to demand justice for Raul and Chuniece and all other victims of law enforcement brutality, misconduct and neglect (Read a report from the march here). For the last year, the coalition's leadership has been working to organzie the Syracuse community to resist attacks on their civil rights.

On Aug. 6 of this year at 2pm, we will again converge on the so-called "Justice" Center to demand real justice. The District Attourney was supposed to conduct an investigation into the circumstances of Raul and Chuniece's death and hold Grand Jury hearings to assess whether criminal charges should be filed. The DA has not released the results of the investigation or the report that was the basis of the Grand Jury presentation. One demand among others is that this information be made public now.

Please join us for this important event. If you are interested in volunteering or have any questions, please contact the ANSWER Coalition at 315-491-6987, or [email protected].