AWC-Japan: Statement of condemnation on the Japan-Philippines joint military exercise

The following statement was released by Asia Wide Campaign (AWC) - Japan. The ANSWER Coalition is in solidarity with their struggle and will continue to build opposition inside the United States against the U.S. government's aggression and military build-up in Asia. 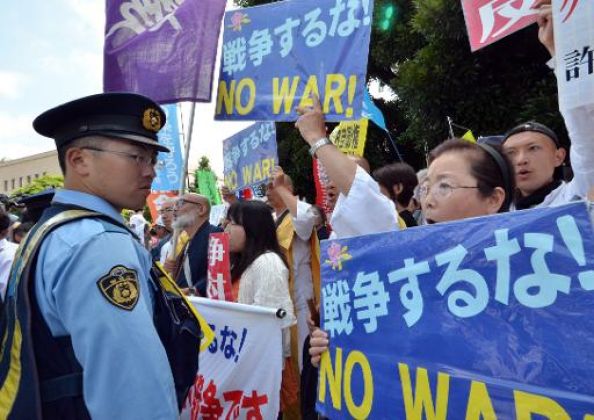 We in AWC-Japan condemn this exercise and drill because these just increase political and military tension in the region. We also strongly denounce the Japanese government and its military forces in their intervention in the territorial dispute among other countries through such methods.

Recently, Japan and the Philippines have rapidly developed their military cooperation. The governments of both countries signed the ‘Memorandum on Defense Cooperation and Exchanges’ in January 2015, following their issue of the ‘Statement of Intent on Defense Cooperation and Exchanges’ in July 2012. The Japanese SDF (“Self-Defense” Forces) has joined the US-PHL Barikatan exercises several times since 2012. The Japanese Maritime SDF also participated in the US-PHL navy exercise which was held near Palawan Island, Philippines in October 2014.

Japan’s moves aim to expand its own military influence in the Asia-Pacific region including Southeast Asia where Japan has huge economic interests. At the same time, recent growing military cooperation between Japan and the Philippines also aim to serve the U.S. so-called ‘rebalance’ strategy toward the Asia-Pacific region, which aim to reinforce the U.S. military presence in the region.

Again, we condemn the recent JPN-PHL joint military exercise and will resist the Abe administration’s rapidly developing maneuvers toward the establishment of Japan as a ‘War State’. We also express our determination to junk the new security bills that the Abe administration is trying to enact just now, and will oppose the consolidation of the U.S.-Japan military alliance.