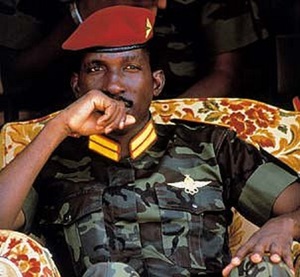 On Saturday, October 12 over 100 people gathered in Washington, D.C., to commentate the life and legacy of African revolutionary Thomas Sankara.

Thomas Sankara, leader of the revolutionary movement that governed Burkina Faso from 1983-1987, was criminally assassinated in 1987 by the forces of neocolonialism who sought to return the former French colony into the Western sphere of influence.

It was this legacy that filled the Festival Center in Washington, D.C., in memory not just of past accomplishments but how the inspirational legacy of Thomas Sankara continues to inspire those engaged in progressive struggles today.

The event featured several elements, including a film clip on the deplorable state of Thomas Sankara's grave, neglected by the country's current authorities; a performance of Nkosi Sikelel' iAfrika, the South African national anthem; and a panel discussion.

The panel included representatives of the ANSWER Coalition, Appeal Inc., and notably Paul Sankara, brother of Thomas. The event was closed by Gnaka Lagoke of the Revival of Pan-Africanism Forum, who summarized the importance of the event.

The event was organized by the Revival of Pan-Africanism Forum, ANSWER, Appeal Inc., and the All-African Peoples Revolutionary Party. The commemoration was the second in as many years of what will be an annual program.