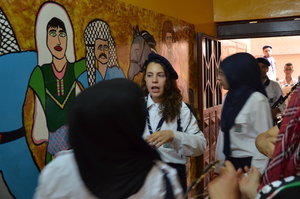 A major international conference was held in Lebanon on April 30 and May 1 in support of the thousands of Palestinian prisoners illegally and unjustly held in Israeli jails. The conference, sponsored by the International Arab Forum for Communication and Solidarity, was attended by 450 people from more than 30 countries. Diplomatic representatives from 14 countries joined the opening session.

The conference sessions were held on April 30 in the Commodore Hotel in Beirut. On May 1, delegates traveled to the south of the country, visiting a refugee camp, a memorial to a 1996 Israeli massacre, the border with Occupied Palestine, and an infamous former prison that Israel and its Lebanese collaborators ran during the Israeli occupation of Lebanon.

The opening session of the conference received extensive TV and other media coverage.

The focus of the conference was solidarity with Palestinian political prisoners, of whom there are more than 5,200 held in prisons inside the 1948 borders of Israel. Prisoners suffer under deplorable conditions, and are subjected to torture and other forms of systematic abuse, denial of medical care, and many forms of humiliation and mistreatment. Among the prisoners are 210 children who also suffer abuse, often with long-term traumatic effects. Every single Palestinian prisoner held represents another violation of international law, which makes it illegal for an occupying power to transfer citizens of the occupied territory inside the occupiers’ borders.

None of the Palestinian prisoners have received anything resembling a fair trial. In the occupied West Bank, the Israeli military uses the emergency laws left over from the time when Palestine was under British rule, including administrative detention. Administrative detention allows the occupiers to hold Palestinians for up to six months without charges, and can be renewed indefinitely.

The conviction rate for those who do receive a trial before a military court is over 99 percent and guilty verdicts are frequently based on secret evidence submitted by the Shin Bet, Israel’s secret police.

Sentences are typically extreme, including the longest in world. Abdullah Ghalib Al Barghouti from Ramallah is serving 67 life sentences, followed by Hassan Abdul Rahman Salama with 57 life sentences. Many others have multiple life terms.

Representatives of the major Palestinian political parties participated in the conference. The vast majority of the 450 people who attended were Palestinian and Lebanese. There were also delegates from Yemen, Algeria, Tunisia, Iraq, Jordan, Kuwait, Spain, France, Netherlands, Canada, Germany, Greece and other countries.

Many of the conference speakers called for the release of Marwan Barghouti, a leader of the Fatah party; Ahmad Saadat, General Secretary of the Popular Front for the Liberation of Palestine; and all Palestinian prisoners. Among the speakers was Fadwa Barghouti, wife of Marwan.

From the United States, former Attorney General Ramsey Clark was a featured speaker, and the author of this article attended and spoke as a representative of the ANSWER Coalition. We both participated in an hour-long interview program for Al-Mayadeen, a major television station.

On May 1, many of the delegates traveled to the south of Lebanon. The first stop was the Burj el-Shemali refugee camp in Tyre, one of 15 Palestinian refugee camps in the country.  More than 400,000 Palestinian refugees live in Lebanon, over half in impoverished camps. The delegates were welcomed by a youth drum and bagpipe group, and speeches by representatives of the camp.

Inside a dramatic memorial, delegates paid homage to the more than 100 Lebanese civilians murdered by Israeli shelling of a UN refugee center at Qana in 1996. Nearly 1,000 people had fled to the Qana center from neighboring towns and villages to escape Israeli aerial bombing. The center was then attacked by heavy Israeli artillery, leaving a gruesome scene of death and mutilation.

After a stop at the militarized border between Lebanon and Israeli-occupied Palestine, the delegation visited the infamous Al-Khaim prison and torture center. Al-Khaim operated during the 1982-2000 Israeli occupation of the country.  A former prisoner described enduring 11 years of ongoing torture and abuse at the hands of his Israeli jailers and their “South Lebanon Army” collaborators.

Testifying to the fierce and prolonged struggle that finally drove the Israelis out in 2000 are hundreds of roadside posters in southern Lebanon depicting the martyrs who died liberating their country.