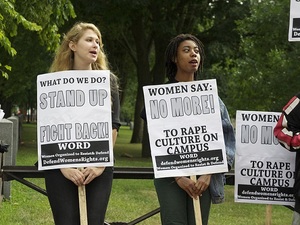 At Yale University, one of the most powerful academic institutions in the country, and one that subsequently produces the country's most powerful people, women have been a target of horrific attacks for decades. While some people think Yale is a progressive university, the largely unaddressed behavior of their male students says otherwise.

That is not where it ends, however. For years, countless female students came to campus authorities, reporting having been assaulted and raped by fellow students. Instead of listening to the complaints, the university discouraged the survivors from taking any action against the rapes, and made promises to look into it on their own.

Finally, in 2011, the women had had enough. After the “No means yes” marches, it became evident that the university's response was the same to both private sexual assault and public displays of terror against women. The administration responded with no formal disciplinary procedure, requests to not tell anyone and unfulfilled promises of mediation.

Women have filed multiple formal complaints. The complaints detail the university's history of public sexual harassment as well as individual testimonies of those who faced harassment and received no response after reporting it, and those who had chosen not to report.

“The University was prioritizing its reputation and the tuition dollars of the offenders over the students who were affected,” said Alexandra Brodsky, who was a lead organizer in the women's efforts against Yale's policies.

The Department of Education's Office of Civil Rights investigated Yale under Title IX for over a year before finding that Yale had a “hostile sexual environment” and requesting policy changes.

The university found evidence of six students having assaulted women on campus – out 16 cases reported in the Title IX and countless more who reported being raped prior to the investigation. The recommended punishment for rape at Yale is a written reprimand.

Yale and the OCR reached a voluntary resolution agreement. Yale changed some of their reporting mechanisms and added some education on consent, but did not fundamentally change any of the policies or structures that permit rampant sexual violence. One male student described the consent education as “teach-ins on how to get away with rape.”

To add insult to injury, Yale has made it a point in their official language to refer to rape solely as “non-consensual sex.” The Yale president's explanation of this was, “People come to very different understandings of what happens.”

Brodsky responded, saying “Yale thinks it can talk its way out of a problem. They're using language that obscures the violence. If you say you gave a written reprimand to someone who raped their classmate, that would be difficult to ignore ... they might think it was OK if you called it non-consensual sex.”

After these abominable policy changes, women at Yale have continued to struggle against the university's blatant disregard for women's safety. A new group of survivors and allies, Students Against Sexual Violence at Yale, have set up meetings with the president to confront the administration head-on and demand change. The New Haven, Conn., chapter of WORD (Women Organized to Resist and Defend) will be working with these students every step of the way in organizing a strong fightback.

Yale is not the only campus where similar actions are taking place – at Southern CT State University, women are taking action against their school's refusal to fire David Chevan, a professor who has been the subject of multiple complaints of sexual assault. WORD is working with SCSU students and alums to put together coordinated actions to remove Chevan.

On August 26, 2013, a number of students proudly joined WORD's Connecticut chapter in a speak-out to demand an end to rape culture on campuses and attacks on women's rights across the country. This was part of a Call to Action issued by WORD for a series of nationwide actions for Women's Equality Day.

The only real solution to this systemic violence against women is an organized women's fightback movement that targets rape culture on every level – from the schools to the courts to Congress. WORD has been and will continue to be at the forefront of this struggle and stands in solidarity with all survivors of assault.