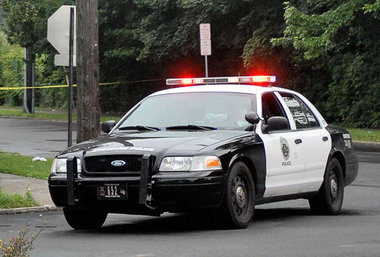 The Citizen Review Board recently released their findings on a complaint filed by Adam C’DeBaca and Risa Cantu C’DeBaca, two organizers with the ANSWER Coalition. The complaint, the first to be filed with the city’s recently revised CRB, stemmed from an assault that was part of the police and Mayor’s attack on the Occupy Syracuse encampment on Jan. 19.

Risa and Adam had been at the Occupy Syracuse site from approximately 1:00 am to 3:00 am on Jan. 19 for a shift to guard the encampment from the impending assault by the Mayor and police.

Shortly after their shift ended, they received word that police were moving in on the camp. About 30 cops, along with a bulldozer and dump truck, showed up to evict the peaceful protesters at 3:40am.

Risa and Adam rushed back to the site upon hearing the news. They parked their car in the lot behind the encampment, entering on Clinton St., parking about seven spaces into the lot.  As they began to walk towards the scene a cop yelled at them to “stop!” They then backtracked around a sedan next to their car in an effort to clear the area. The cop screamed “I told you to stop!”

At this point, the cop attacked Risa and Adam, running toward them, grabbing them and throwing them up against the sedan. The cop violently held both of their arms. Adam said “We are not resisting.” Risa screamed “You are hurting me! Stop! You are hurting my arm!”

After several seconds, Adam asked “Are you detaining us, or are we free to go?” Upon hearing these words, the cop let both Adam and Risa go. The cop twisted Risa’s arm so forcefully that his nails dug into her skin which, despite several layers of winter clothing, left a mark.

The CRB reviewed the two allegations brought forth against the Syracuse Police Department. The allegation against the SPD for misconduct was sustained by the CRB. The CRB panel found “a lack of truthfulness” in the statements made by the police officer and sergeant involved. In other words, the police were caught lying about what happened.

The allegation of excessive force against the police officer who attacked Risa and Adam, however, was not sustained. According to a letter mailed to the complainants, the CRB found that the allegation “could not be resolved because of insufficient evidence.”

Although there were pictures that documented the injuries that Risa sustained during the attack, the issue for the CRB was whether or not Risa and Adam retreated or advanced when they were told by the officer to “stop.” As nothing short of an audiovisual recording could have provided the proof required to verify that Risa and Adam did not advance toward the officer, this particular outcome was not unexpected.

What was unexpected was the CRB’s alleged inability to inform the complainants and the broader public about the specific disciplinary recommendations transmitted from the CRB to the Chief of Police. According to Adam, “This so-called ‘protection’ seems to invalidate the intended public process of the CRB.” The police union, misleadingly called the “benevolent association,” seeks to shield the police from any and all public accountability.

The union, for example, has fought legal battles to protect their internal disciplinary measures, which prevents the public from knowing even the names of brutal and killer cops. This confirms the extent to which the police can harass, beat, maim, and kill working-class and poor people with almost complete immunity.

Adam told ANSWER Syracuse that “Risa and I have stressed repeatedly that our incident was relatively minor in comparison to other incidents of police brutality in Syracuse.” Nonetheless, it’s necessary to fight back against all forms of police violence. The reincarnated CRB itself is the product of a long struggle by the Syracuse community, and it’s up to us to continue to expand the ways that we can defend ourselves and our communities from police violence.