Crisis in Mali grinds on 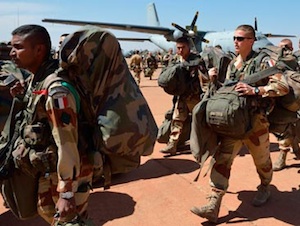 The conflict in Mali continues despite persistent claims from Paris that France is drawing down troops, allegedly a sign the conflict itself is winding down. The French government has declared that it is seeking to reduce the French military's presence to 1,000 troops by the end of the year.

Troops from Chad, who were playing a key role in assisting French efforts, are currently increasing their pace of withdrawal, while 4,000 troops from various West African nations have arrived to assist the French and Malian militaries. In addition, the European Union has sent a military training mission to Mali to help bolster military efforts in the North.

The 14-week campaign spearheaded by the French initially seemed to drive Ansar Dine and other militant Islamist elements out of power in the North. However, it is now clear that the northern rebels made a conscious choice to retreat into a guerrilla form of conflict. On April 13, three Chadian troops were killed in a suicide attack in the northern town of Kidal, part of what Reuters referred to as a “wave” of attacks across northern Mali.

The Malian government, whose legitimacy was suspect even before the French troops arrived, has begun sending signals that they desire a longer French intervention, with elections supposedly to take place in July. Prime Minister Sissoko stated that French troops should remain to prop up his government until “stability” is achieved.

The irony here is that French intervention in Mali seems to be increasing instability. To quickly capture the North, French forces allowed the MNLA, a Tuareg nationalist movement that has demanded independence in the North, to re-enter some of their former struggles. They had previously been sidelined by Ansar Dine and others. There appear now to be growing clashes between the MNLA and the Arab Movement of Azawad (MAA) over control in northern areas.

MAA has declared that they seek to work with the French and African forces in “fighting terrorism” in the North, to which they also have staked a claim. On the one hand then, it seems there is a contest over who will be the dominant armed group in the North, which by extension means who will gain the favor of the French. And on the other hand, for elections to take place in July, the MNLA and other northern groups have to agree to remain a part of Mali, which is not a foregone conclusion.

French imperialist intervention in Mali has only exacerbated tensions in the country and created a three-pronged, if interrelated, conflict.

In sum, French imperialist intervention in Mali has, as we predicted, only exacerbated tensions in the country and created a three-pronged, if interrelated, conflict—the struggle of Islamist forces against French and African nations, the struggle between various nationalist and ethnic groups for control of the North, and the unresolved issues of self-determination in the North.

When the French intervention began, we pointed out that imperialist intervention was not a solution—that the role of the West in Mali is about protecting its own economic and strategic interests, not the well-being of the Malian people. The French have attempted to manipulate a range of forces that together with African troops and U.S. drones can be used to create some sort of “government” that will fight the enemies of the West and attempt to create stability to make it easier for Western corporations to exploit the region's resources.

Opposing the continued French occupation of Mali and the increased presence of Western militaries in Africa is crucial to the broader struggle against imperialism.