The struggle against the presence of the U.S. armed forces and the reactionary, militaristic policies of the Abe administration has rapidly grown in recent weeks. This broad, progressive movement is also protesting nuclear power and the restart of nuclear reactors after the Fukushima disaster. The following was compiled from reports from Yoshio Nakamura of AWC-Japan, an anti-war organization on the front lines of this movement. 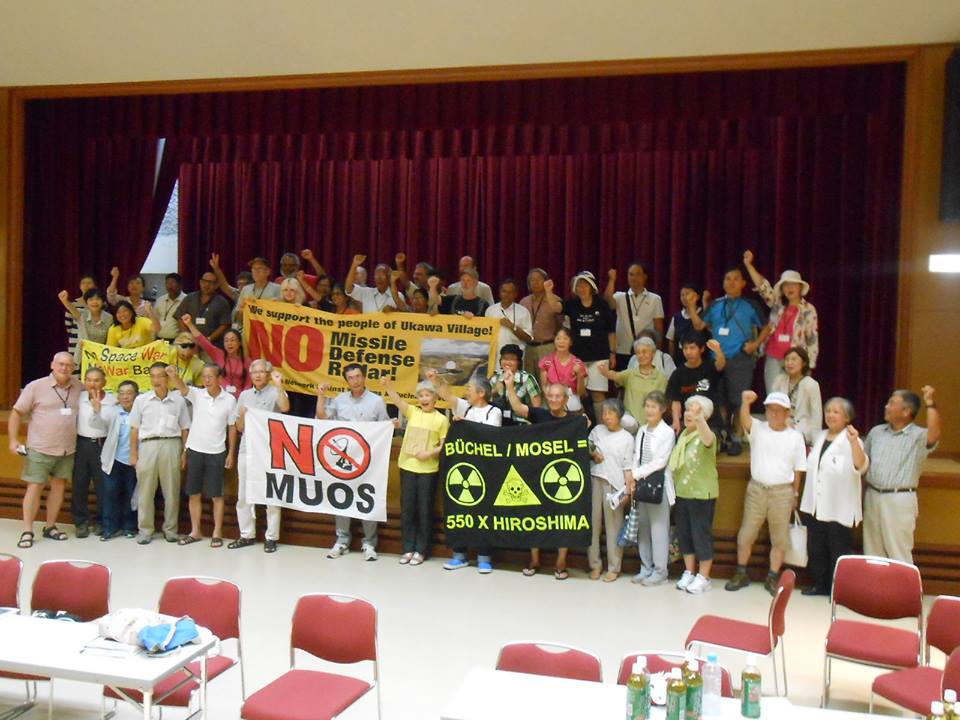 International delegates visited Ukawa, Kyotango city, located in the northern part of Kyoto prefecture where the U.S. Missile Defense Radar has been deployed since last October 2014. This was part of the program arranged by the Global Network against Weapons and Nuclear Power in Space and its counterpart in Japan.

After meeting with local residents who oppose the newest U.S. base in Ukawa, delegates protested Kyotango city authority and Japan’s defense authority there. Finally, they showed their protest in front of the base.

This was a very good program for both foreign delegates and villagers. International peace activists could learn the real situation of the base and its serious impact on the small village. On the other side, villagers could also understood that they are not alone. 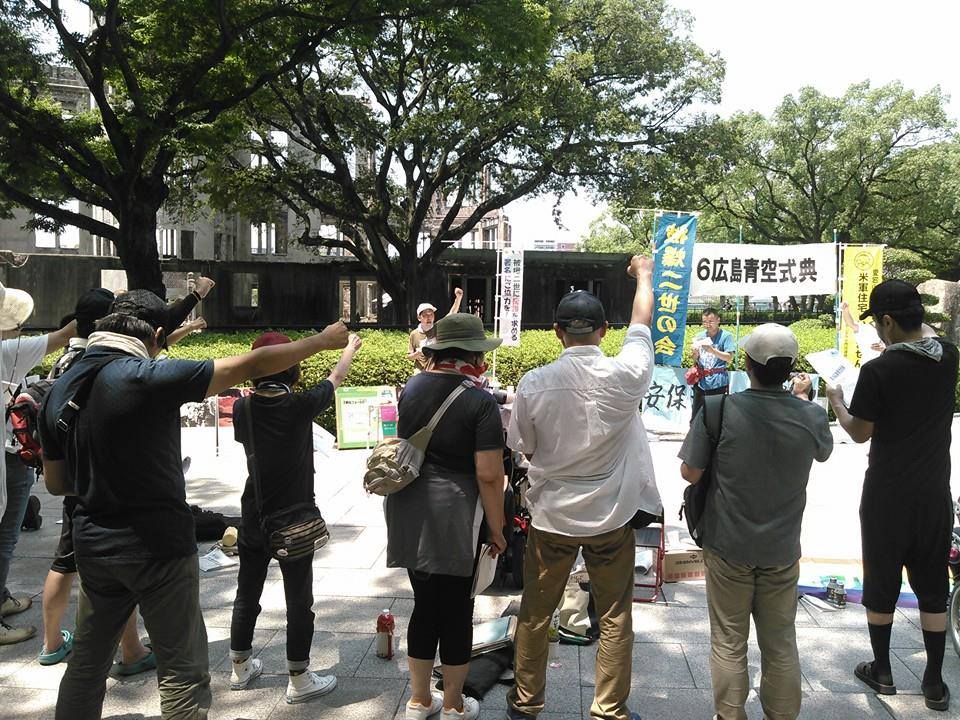 The Association for the Second Generation of A-bomb Victims, which is a member organization of the AWC-Japan, led an independent rally at the Hiroshima Peace Park.

70 years had already passed since the U.S. dropping of the A-bombs on Hiroshima and Nagasaki. For many years, survivors have fought for the abolition of all the nuclear weapon, shouting 'No more Hiroshima and Nagasaki!' U.S. Imperialism, however, still remains the No.1 nuclear power in the world.

At the same time, this year marks the 70th anniversary of the Japanese imperialists’ defeat on their war of aggression in Asia-Pacific. Long years had passed since then. The Japanese government, however, has still neglected a sincere apology and state compensation to the war victims in the region. Not only that, the Abe administration is eager to re-militarize Japan through the establishment of new security bills.

Now, U.S. and Japanese imperialism are taking a step hand in hand toward deeper domination of the region. We need to resist them.

The main slogans of the rally included:
1. Realize state compensation to all the A-bomb victims, and their succeeding generation!
2. Scrap all nuclear weapons! No to Japan's ambition of nuclear armament!
3. No to the new security bills! Oppose U.S.-Japan military alliance! Stop reinforcement of U.S. bases in Japan! All the U.S. troops out of Asia!
4. Shut-down all the nuclear power plants in Japan! Stop reactor restarts! No to construction of new nuclear power plants!
5. Japanese government should take responsibility for the past war of aggression in Asia! Implement genuine apology and state compensation for all the war victims in Asia! 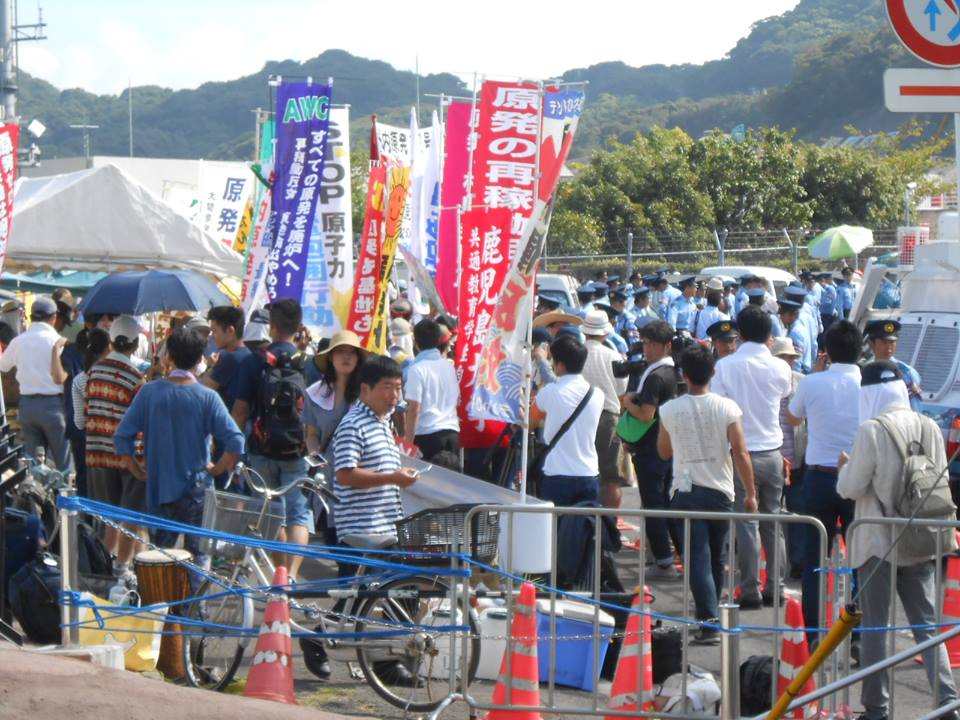 People from all over Japan gathered at Satsuma-Sendai city, Kagoshima prefecture, to protest the restart of a reactor there.

In the morning of August 11, 2015, the Kyushu Electric Power Corporation finally restarted the idled reactors in the Sendai Nuclear Power Station. We vehemently denounce it.

Opinion polls show that people in Japan don’t support reactor restarts. We had survived without nuclear energy for around 2 years. However, electric monopolies and the Abe administration were eager to restart the idled reactors just for their profits.

I just stayed in Satsuma-Sendai city for 4 days but some activists had stayed at a protest camp on a beach just near the nuclear power station for over 10 month in order to serve the development of local people’s struggle against nukes.

No Nukes! No War! Boring down the Abe administration! 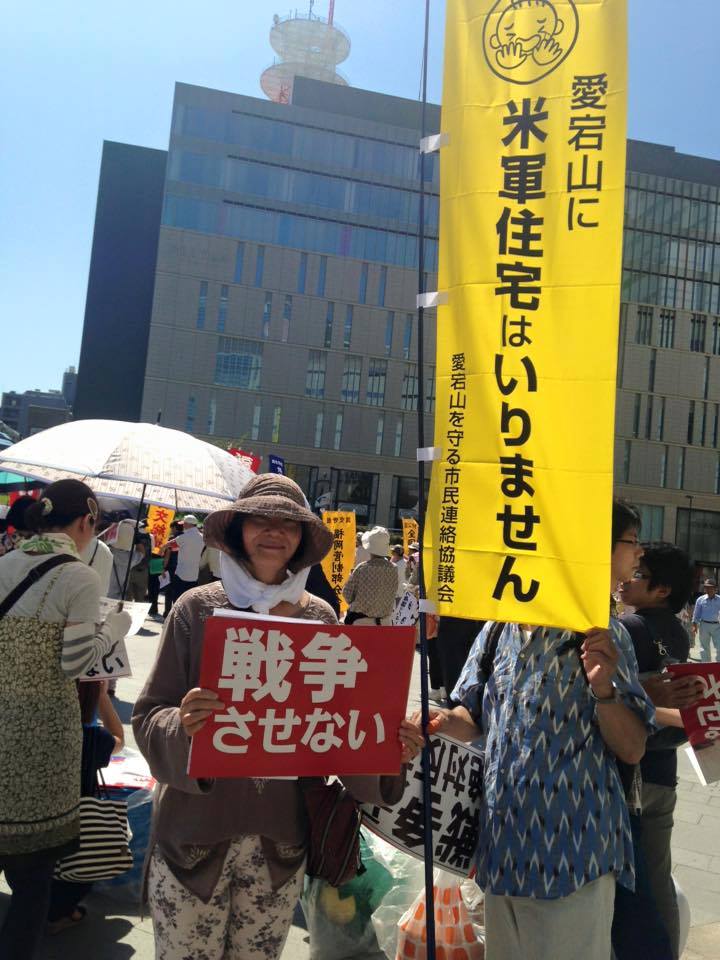 August 21 was the 5th anniversary of the launch of the regular protests that have been held by local residents near Atagoyama, Iwakuni. In order to show their protest against the building of a huge U.S. military housing complex as a part of comprehensive consolidation plan of the U.S. Iwakuni base, they have held the regular protest on the 1st, 11th and 21th of every month since 2010.

On that day, AWC-Japan called on member organizations and international friends to hold solidarity actions with the resistance of the people of Iwakuni. In response to the call, actions including signature collecting, film showing and gathering about the Iwakuni issue were held in different cities in Japan and other countries. We also received a solidarity message from BAYAN-Philippines, Taiwan Labor Rights Association and the ILPS-Korea group.

The Iwakuni base is the nearest U.S. base to the Korean Peninsula (except for ones in South Korea). The fighters which belong to the base often participate in the US-ROK war exercises.
Resist imperialist military domination! Ban all the bases! 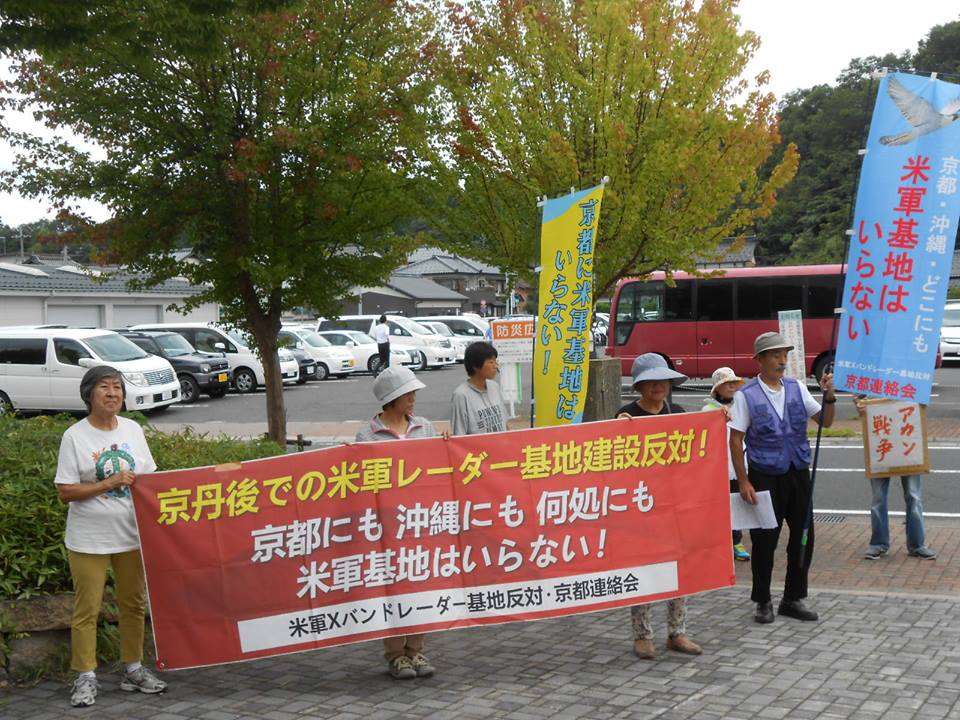 The Kyoto Coalition against the U.S. X-band Radar Base held a protest in Kyotango city, Kyoto prefecture. It was a response to the launching of the latest session of the Kyotango city assembly.

The U.S. base in Ukawa, which was built in the last year to serve the U.S. missile defense network, has already brought about serious problems including noise, rampant traffic accidents committed by the US military personnel, etc.

Members of the coalition held protests at Kyotango city hall and then at the gate of the U.S. missile radar base in Ukawa district, demanding the closure of the base. 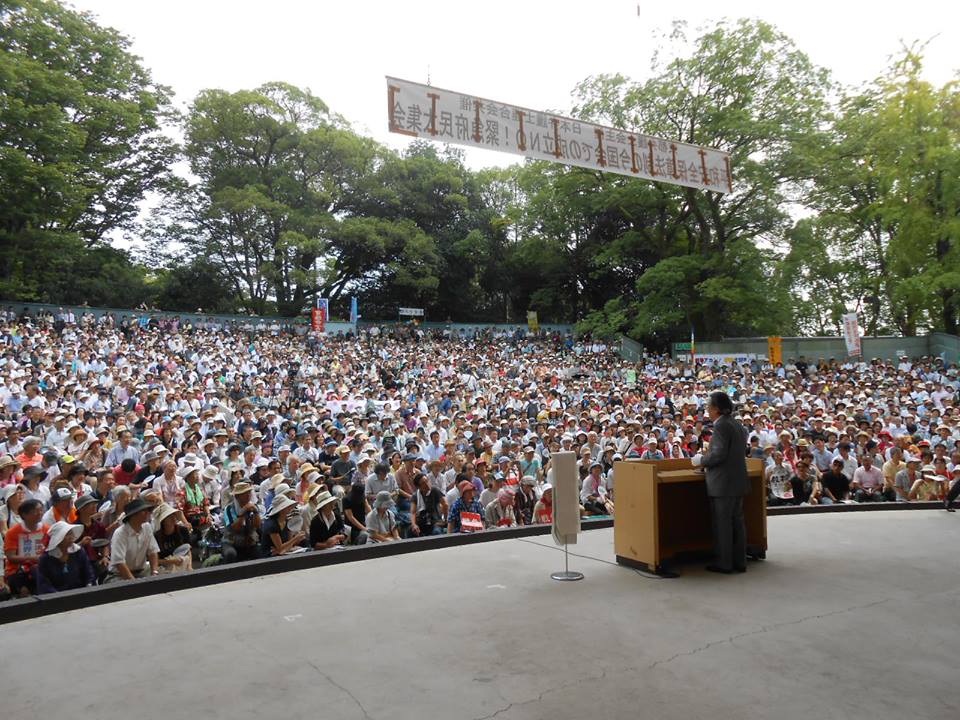 In Kyoto, 4,500 people took to streets to oppose the new security bills. The Kyoto Lawyers Association sponsored the rally and march because they regard the bills to be unconstitutional.

Through the establishment of the new security legislation, the Abe administration aims to turn Japan into a state that is able to carry out wars of aggression and military intervention abroad along with the U.S. and other allied countries, in the guise of exercising the “Right of Collective Self-Defense”. But a majority of people in Japan oppose it. 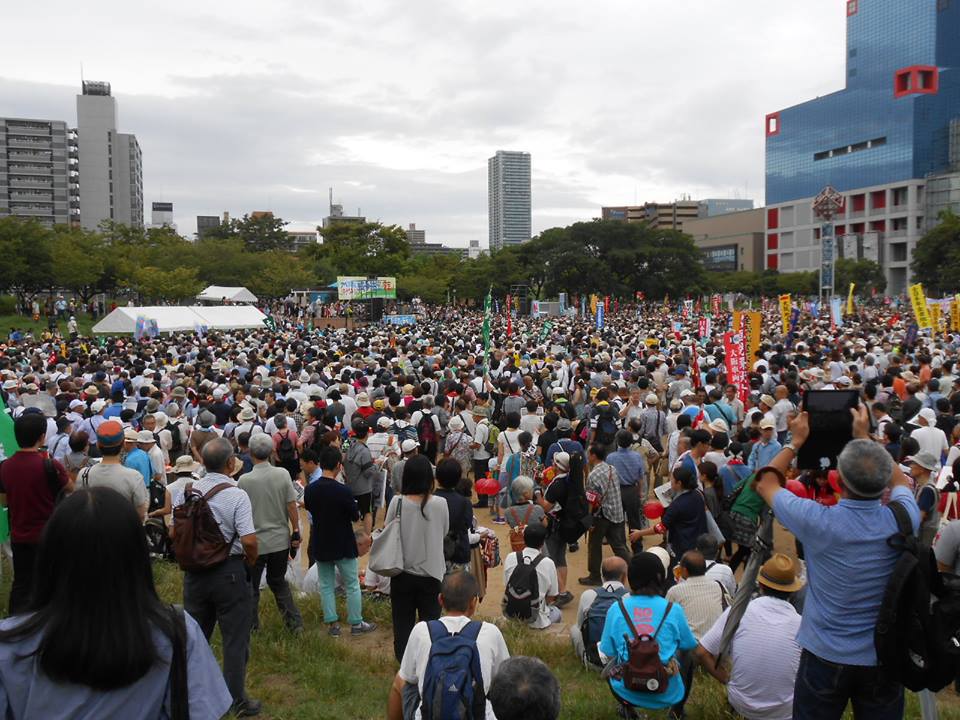 25,000 people joined a protest against the new security bills in Osaka this afternoon.

This was a part of simultaneous actions all over Japan in response to a call from the ‘Sougakari Koudo’ committee. Similar actions were held today in over 300 places of Japan in order to show people’s deep determination to scrap the bills.

The ‘Sougakari Koudo' committee is the broadest united front that aims to scrap the Abe administration’s new security legislation and to defend Japan’s pacifist constitution. The meaning of ‘Sougakari Koudo’ is ‘actions by all (peace loving) forces’ in English. 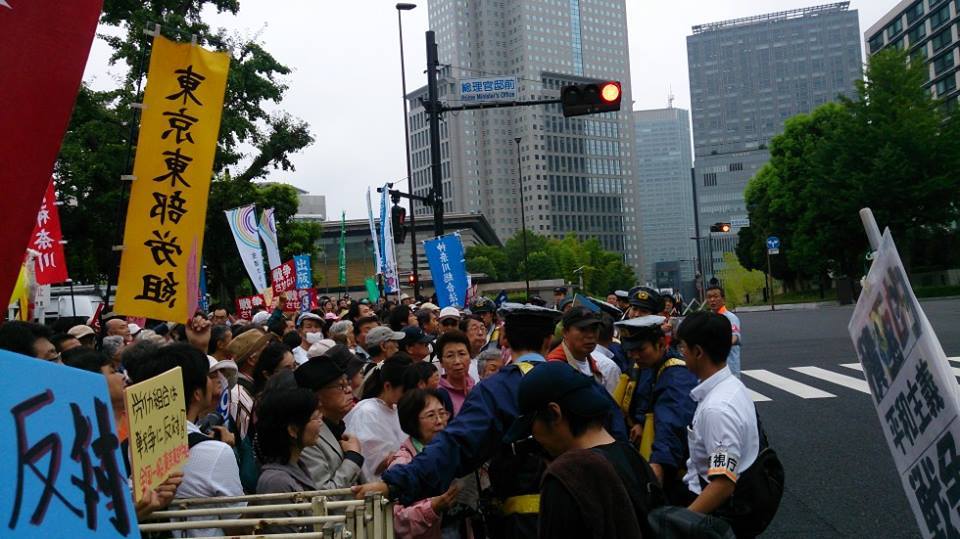 In spite of expanding people’s protest, however, the Abe administration is trying to pass the bills on the House of Councillors (Upper House). According to the latest information from media, Abe plans to pass the bill on around September 11.

We people in Japan are in a very crucial moment. We should do everything that we can do to scrap the bills.

Scrap the war bills! Bring down the Abe administration! 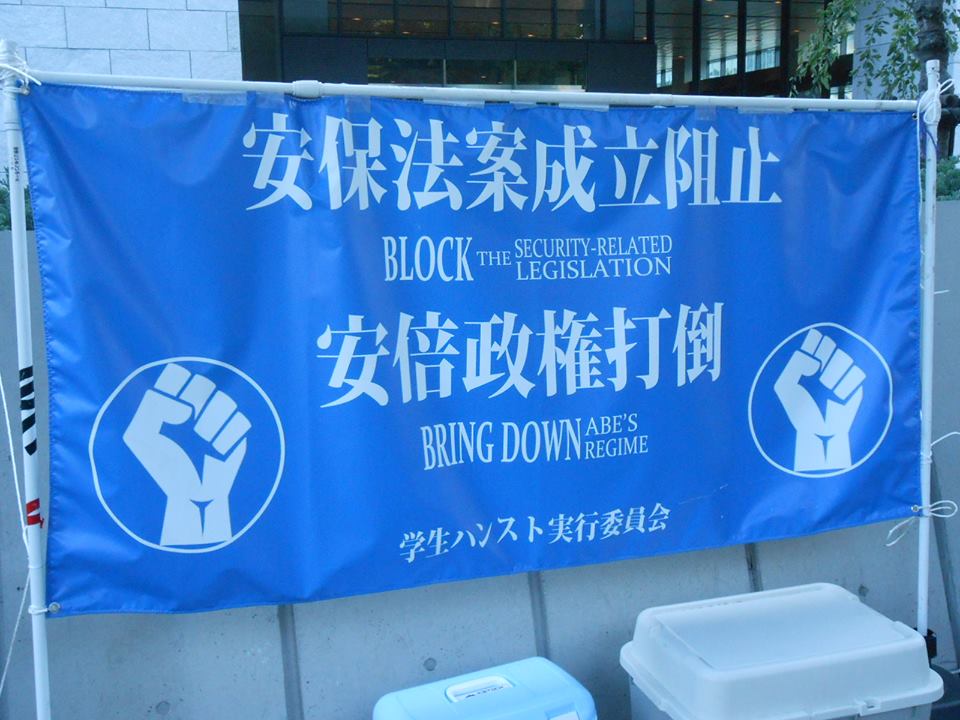 Four students, who belong to ‘Student’s Hunger Strike Executive Committee to Oppose Security-related Bills and Bring down the Abe Administration’, started a hunger strike in front of the Diet building on 2:00 p.m. on August 27. According to their statement, they regard their hunger strike as ‘a process of direct actions to call on all people who would become victims of wars to together reject war mobilization or cooperation.’

Due to harassment by police, their hunger strike had been carried out in very difficult circumstances. Even in the rain, they continued to with just umbrellas and raincoats because police ordered the removal of a tent that was made by plastic sheets for their vigil.

In such a situation, three students stopped their hunger strikes this morning. Even though it was a decision against their will, the student committee considered a doctor’s opinion that the continuation of hunger strike risks their life. And then, the doctor ordered the last student to stop it for his life this afternoon.

The student committee held a small rally on 5:30 p.m. today and officially announced the end of tjeor hunger strikes.

Many people sympathized with their determined protest against the Abe administration and its war drive. Students stopped their hunger strikes, but their struggle against war and for social justice will continue.