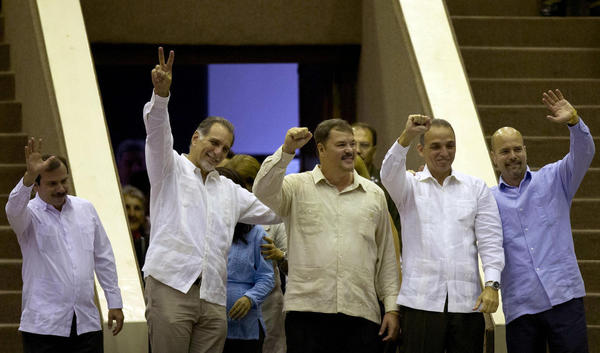 Last December 17th, the US president Barack Obama corrected an excessively long injustice, and simultaneously he changed the direction of history by releasing five Cuban anti-terrorist fighters who were in prison for more than 16 years.

By acknowledging the failure of anti-Cuban policies, re-establishing diplomatic relations, removing all possible restrictions at hand, proposing the complete elimination of the blockade and demanding a new age in the relation with Cuba, all in a single speech, he (Obama) surprised everyone, including brainy analysts.

The hostile policy set up by President Dwight Eisenhower (1953-1961) —before Obama was born— was followed by Democrat and Republican presidents of the U.S., and it was later codified with the Helms-Burton Law, approved by Bill Clinton in 1996.

It was pretty successful in the early years. In 1959, with the Triumph of the Revolution, the U.S. was at the apex of its power. It exercised unchallenged hegemony over several countries of the world, especially in the Western Hemisphere. The U.S. expelled Cuba from OAS and the island was isolated. Cuba was then helped by the Soviet Union and its associates at the COMECON (Council of Mutual Economic Assistance), made of countries that signed the Warsaw Pact.

The falling of the so-called “real socialism” gave false hopes to those who believe it was also the end of the Cuban revolution.

They imagine the imminence of a long period of unipolar dominance. Gloating about good times, they do not notice the deep sense of things happening: the end of the Cold War opened new spaces for social struggles and made Capitalism face new challenges to overcome.

The fall of the Berlin Wall prevented them from seeing that in February 1989, Venezuela was shocked by a social uprising called “El Caracazo”, sign of the blossoming of a new epoch in Latin America.

Cuba survived the collapse of former allies. Its resistance was key factor for the deep transformation of the continent. The policy to isolate Cuba failed years ago since the U.S. ended isolated itself, as stated by current Secretary of State, John Kerry.

A new relation with Cuba was paramount for Washington. The U.S. needed to approach its relation with the continent, no longer its backyard. The achievement of such a goal is fundamental now. The U.S. cannot lead as it did before.

There is still a long way to go to reach that level of relation. First, the economic, commercial, and financial blockade must stop, as major sectors of U.S. business world are urging.

However, to normalize relations it is essential to learn how to coexist with a different viewpoint and eradicate old dreams of domination. It would imply to respect the sovereignty of people, fundamental principle of the UN Chart, which is not convenient for the most powerful countries.

In relation to the freedom of the Cuban Five, all U.S. presidents have used —without exception— the power granted by the Article II, Section 2, Paragraph 1 of the Constitution. All of them have used it for more than two centuries and nothing has stopped them.

Such paragraph in the Constitution authorizes the President to cancel the sentences and grant pardons, in cases of alleged crimes against the United States.

There were lots of reasons to demand executive clemency for the Cuban Five. In 2005, a judge panel of the Appeal Court revoked the process against them —defining the case as a “perfect storm of prejudice and hostility”— and ordered a new trial.

In 2009, the same court determined the case has nothing to do with neither espionage nor national security in the United States. Both verdicts were approved with full consensus.

Regarding another important charge, that of “conspiracy to commit a murder” against Gerardo Hernandez Nordelo, his prosecutors admitted it was impossible to prove such false accusation and they even tried to remove it in May 2001 in an unprecedented move. Such idea came from the attorneys of former President George W. Bush (2001-2009).

Five years had passed and Gerardo awaited any response to his repeated appeals to Miami court to free him, or at least revise his case, or order the government to present the “evidence” used to condemn him, or agree to listen to him about the extent of the money involved in such media campaign to trigger that “perfect storm”.

The court never answered back. No words from bigger media groups were heard about that unusual paralysis of the judicial system. It was obvious it was a political case and only a political decision could solve the situation. No one else but the President could do it.

Obama showed wisdom and determination when he faced with courage the basic problems rather than limiting himself to free any person. The Cuban Five saga was the consequence of an aggressive strategy and the best move was to put an end to both things simultaneously.

No one can deny the transcendence of the announcement of December 17th. It would be a mistake, however, to ignore that there is still a long, winding way to go. It will be necessary to advance firmly and wisely.