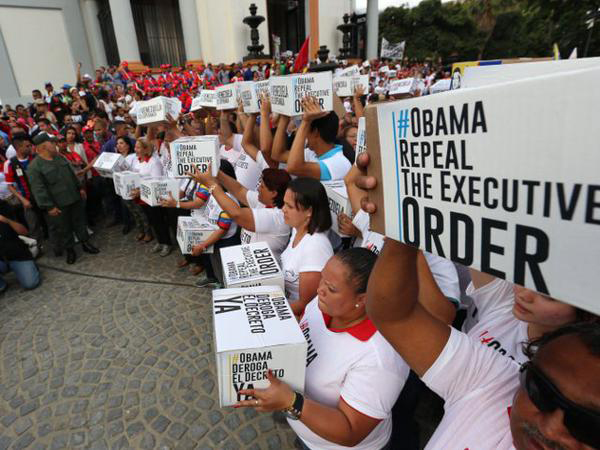 As the Summit of the Americas opened in Panama this morning, more than 13 million signatures have already been collected to back revolutionary Venezuela’s demand that President Barack Obama rescind his March 9 Executive Order. That order declares Venezuela to be an “extraordinary and unusual threat to the national security” of the United States. President Nicolás Maduro is expected to present the petitions to Obama at the summit.

Although Obama and other U.S. officials have been pushed back by the massive denunciation of millions of people and yesterday Obama admitted that Venezuela is not a threat, the Executive Order and sanctions are still in effect.

This is just one of many disputes between the United States and its allies, on one side, against the rising unity of revolutionary and progressive governments and peoples in Latin America and the Caribbean, on the other.

On April 8, the Cuban and Venezuelan official delegations protested vehemently outside the Panama Hotel, over the U.S. government’s manipulations to include anti-Cuba terrorists and mercenaries at a civil society forum of the Summit of the Americas.

The Cuban revolutionaries demanded the expulsion from the forum of a U.S.-backed “delegate,” Felix Rodríguez Mendigutía. He is the notorious CIA operative who murdered revolutionary Che Guevara in Bolivia in 1967.

Rodríguez is part of a group of Cuban right-wingers who were hand-picked by the U.S. government to falsely represent Cuban “civil society” in the parallel meetings to the Summit of the Americas conference for the 35 heads of state in the Western Hemisphere.

Cuba’s delegates declared in a press conference they would not dignify a forum where U.S.-paid mercenaries who support terrorism against Cuba are participating.

Millions in solidarity with Venezuela

Venezuela is another major focus, with some 13 million signatures collected in just a few weeks, demanding that Obama revoke the Executive Order. The U.S. officials’ claim that the decree’s “extraordinary threat” phrase was a “misstatement,” was seen by Venezuela’s supporters as simply a ploy to minimize condemnation of Washington at the summit.

Today, Bolivian President Evo Morales spoke in an exclusive interview with TeleSUR, expressing his fullest solidarity with Venezuela. “Obama will remember that the worst error he made was the decree against Venezuela.”

Morales said that the ALBA countries—the Bolivarian Alternative for the Americas—will meet to discuss a further response to the imperial decree.

Cuba’s presence at summit a victory

The Summit of the Americas is a project of the Organization of American States. The OAS was created by the U.S. government in 1947 as an international body that included all countries of the Western Hemisphere, to assert domination of the region.

Cuba has been excluded from the OAS since 1962, when it was expelled by U.S. initiative for being “Marxist-Leninist.”

Cuba’s resistance to imperialism and its growing prestige in Latin America and the Caribbean—as well as Washington’s isolation in the region—forced Obama to concede to Cuba’s participation this year.

President Obama’s announcement on December 17—seeking diplomatic relations with Cuba, and of a prisoner exchange including the freeing of the three remaining Cuban Five heroes—was timed to help improve Washington’s profile before the Summit.

Facing growing protest from Latin American leaders that Cuba’s continued exclusion from the OAS could no longer be tolerated, Obama also stated that Cuba would be “permitted” to participate in the upcoming April 10-11 Summit of the Americas in Panama.

In a rush before the two-day summit concludes, Obama has finally recommended that Cuba be removed from the list of states designated as supporting terrorism. That ignominious list of the U.S. State Department enables the government to apply severe sanctions on the countries of Iran, Syria and Cuba. Cuba’s removal would be a major relief for the socialist nation, as it will be able to resume transactions with international banks that up to now were fined billions of dollars for doing business with Cuba, Iran and Syria.

Of course, the machinations of U.S. imperialism against both Cuba and Venezuela continue. Just before traveling to Panama, Obama was in Jamaica—the first U.S. president to visit that country in over 30 years—to try to lure Jamaica and the member states of Petro-Caribe away from their economic alliance with Venezuela. To that end, the U.S. established the Caribbean Energy Strategy Initiative last June as part of its destabilization strategy against the Bolivarian Revolution of Venezuela.

This year’s summit could result in a defeat for the United States, similar to the 2005 summit that took place in Mar del Plata, Argentina. There, the Bush administration was unable to secure its goal of continent-wide free-trade agreements to favor U.S. corporations.

Instead, Hugo Chávez, revolutionary president of Venezuela, announced the expansion of ALBA and the creation of Petro-Caribe to assist the Caribbean islands with oil, and economic solidarity with debt-ridden Argentina.

The massive expressions of international solidarity for Cuba, Venezuela and other countries carrying on progressive struggles in the continent signal a new era in which the peoples of Latin America and the Caribbean no longer accept being dictated to by Washington.