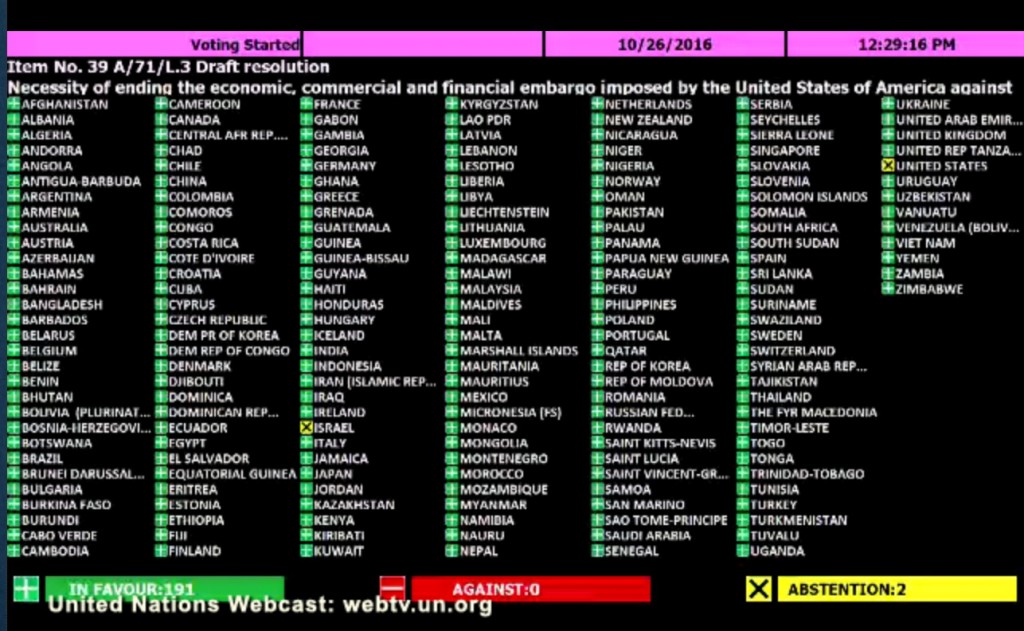 Reposted from the website of the Cuba and Venezuela Solidarity Committee

Twenty-four times before the United Nations General Assembly has voted to condemn the U.S. blockade of Cuba. In a historic vote, the UNGA did so again for the 25th time, but for the very first time there were no “No” votes at all, as the U.S. and its loyal ally Israel were finally forced by the weight of world opinion to abstain on the vote. The final vote was 191-0-2. The U.S. government frequently uses the phrase “world opinion” on one subject or another when they really mean the opinion of the U.S. and its imperialist allies. This U.N. vote was a demonstration of real world opinion. The blockade is still very much in effect, but nevertheless this vote was a historic victory for the Cuban people and its 57-year resistance against the attempt by the U.S. to undermine and overthrow the Cuban Revolution.

Cuban Foreign Minister Bruno Rodríguez Parrilla delivered a powerful, impassioned, and important speech in support of the resolution. While acknowledging and praising the improvements that have occurred in the last two years in U.S.-Cuba relations, he made clear that the blockade was still very much in effect, and still has severe effects on the Cuban people. He called it “unjust, immoral, inhuman, and illegal.” He also denounced continuing U.S. efforts at subverting the Cuban Revolution, all while it pretends to “respect Cuban sovereignty.”

That lack of respect was very much in evidence during the speech which preceded Rodríguez’ — that of U.S. Ambassador to the U.N. Samantha Power. After announcing the U.S. intention to cast its historic abstention, Power devoted much of her speech to scurrilous attacks on alleged human rights violations in Cuba, and spurious claims such as her claim that the blockade is legal, and her assertion that U.S. policy had been designed to “isolate Cuba”. The real intention of U.S. policy was spelled out in a 1960 State Department memo — “to bring about hunger, desperation, and overthrow of government.” The Obama administration has brought a “kinder, gentler” face to that policy, but the aim of overturning the Cuban Revolution remains the ultimate goal.

Bruno Rodríguez spoke for the entire Cuban people in what was effectively an answer to Powers in his closing words: “We have and we will defend our own values and symbols which we’ll continue to enrich. But they’ll always be Cuban. We will never change them for others that are strange to us. We will struggle to build a sovereign, independent, socialist, democratic, prosperous, and sustainable nation. We will never go back to capitalism. As was stated by the leader of the Revolution, Fidel Castro Ruz, on April 19 last, we will perfect whatever needs to be perfected, with utmost loyalty, and united force, as was done by Martí, Maceo, and Gómez, in an unstoppable march.”

Responding to the vote, the following message to Cuba solidarity activists was sent out by the Cuban Institute of Friendship with the Peoples (ICAP):

With joy and pleasure we have witnessed a new moral victory at the United Nations General Assembly. Indeed a triumph that greatly depends on the engagement, commitment and support of international actors such us you, our friends in US.

Our first words to you are of THANKS; for your consistency, hard work, steadfastness and perseverance in supporting our struggle for decades. For the “stubbornness” of dreaming and realizing that another world is indeed possible and achievable. For being with us, especially in our most difficult times. THANK YOU VERY MUCH!!!

None of Cuba’s International gains would have been possible, if had not been for your persistence and determination in helping us out to move forwards.
Today’s result: 191 in favor, and even the change of votes (the 2 abstentions of the traditional opponents), significantly rest also on your everyday struggle, on your diligence presenting Cuba as it is to those still misinformed or misled, and the pressure the solidarity with Cuba have exerted towards the US government. We want all groups and individuals who support Cuba to feel this success as yours too.

Please extend our eternal gratitude to each and every one of those who have fought with us in this battle of ideas. From deep inside our hearts we are grateful, but this is just another crack in the wall. We need to pull it down for good, meaning we are still counting on you and there’s much to be done.