"Five Days for the Five" set for Washington, DC 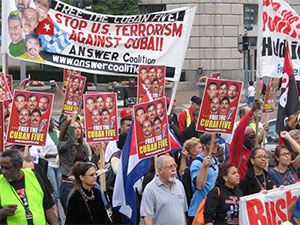 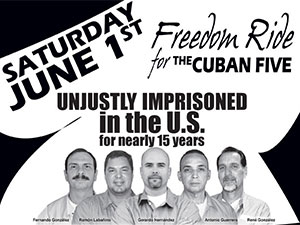 The ANSWER Coalition has endorsed the "Five Days for the Five" taking place in Washington, D.C., May 30-June 5.

Below please find a message issued by the the National Committee to Free the Cuban Five. Following that, please find the full list of events.

As the Cuban Five approach 15 years of unjust imprisonment, supporters from across the world will converge on Washington, D.C. in late May for a week-long series of events called "Five Days for the Five." We urge all supporters to join us there, and add your voices to the call to Free the Five, along with Angela Davis, longtime activist and scholar; Miguel D'Escoto, former Foreign Minister of Nicaragua, President of the 63rd UN General Assembly 2008-09; Ignacio Raimonet, journalist based in France, editor-in-Chief of Le Monde Diplomatique 1991-2008; Dolores Huerta, co founder of the United Farm Workers (UFW); Fernando Morais, former Brazilian parliamentarian, author of best seller "Olga" and "The Last Soldiers of the Cold War"; Danny Glover, actor and activist; Rev. Joan Brown Campbell, former General Secretary of the National Council of Churches USA; María Leon, former Minister of Women Affairs, National Assembly delegate of the Bolivarian Republic of Venezuela; Saul Landau, filmmaker and author; Martin Garbus, U.S. lawyer and member of the legal team of the Cuban Five; Wayne Smith, former Chief of the U.S. Interests Section in Cuba, and many others.

There are several public events during the week, the most important will be a rally in front of the White House on Saturday, June 1. Groups in New York City are organizing "Freedom Ride for the Cuban Five" buses to bring people to the event - for more information call 347-201-3728 (9am-5pm) or the Freedom Ride Hotline 718-676-0106.

Other events scheduled include a press conference, a cultural evening, hip-hop concert, lobbying, panel discussions, new books on the Five, and a videoconference to connect with families of the Five. The complete schedule of events can be found on our calendar.

FULL SCHEDULE OF EVENTS listed by the Int'l Committee for the Freedom of the Cuban 5: